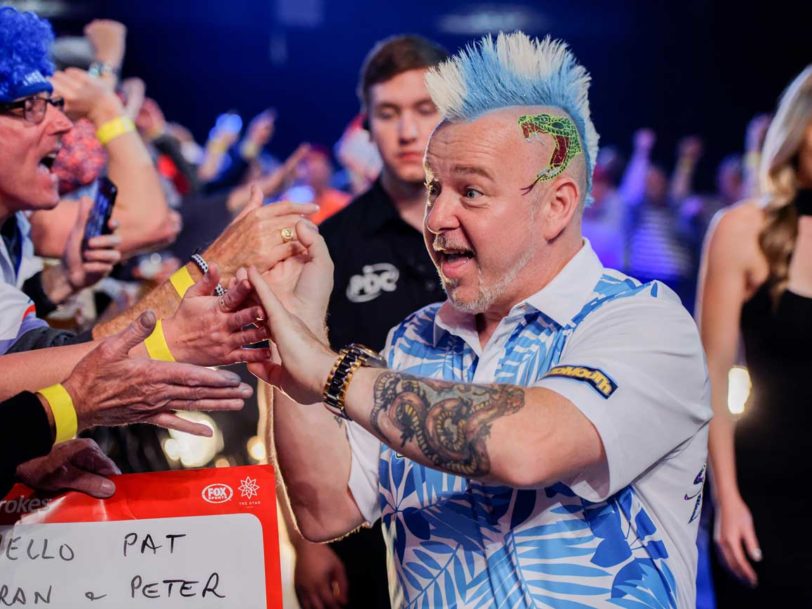 From rock anthems to dancefloor classics, the best darts walk-on music will have you chanting along and chucking your pint in the air.

Since 2008, thousands have marched into London’s Alexandra Palace to witness some of the world’s greatest darts players at the oche (and, of course, to dress up and sink a copious amount of alcohol). As with many sports, walk-on music is paramount to building an electric atmosphere, and in darts this is no exception. With the 2021 PDC World Darts Championship just around the corner, here are seven songs that have hit the bullseye to stand among the best darts walk-on music of all-time.

The 2020 PDC champion and current world No.2, Peter Wright will be looking to build on his maiden victory at Alley Pally this year. Ever the entertainer in the darts world, Wright’s entrance is as colourful as his image: through the hairdressing talents of his wife, Joanne, he dons a bright Mohican ’do with a snake painted on the side, complimenting his nickname, Snakebite. This is accompanied by bright clothing and radiant patterns, making Wright one of the style icons of the game. His walk-on is more like a side-step, as he skips onto the stage to a song that completes his image. Pitbull’s 2012 dance-pop tune Don’t Stop The Party sets an energetic tone for Wright’s matches, which are never without excitement.

“Hawaii 501” himself, Wayne Mardle, has always been a heavily popular character in darts. Despite never winning the PDC tournament, Mardle has reached four semi-finals. Recently, he has been heavily involved in darts commentary and is a regular on the punditry circuit. Coupled with the famous Hawaiian shirts that gave him his nickname, Mardle’s adoption of The Ventures’ theme tune to Hawaii 5-0 made for an inspired choice among the best darts walk-on music.

5: Peter Manley: (Is This The Way To) Amarillo (by Tony Christie)

A two-time world No.1 and three-time PDC World Darts Championship finalist, Peter Manley was a controversial figure in the late 90s and 2000s who infamously refused to shake Phil Taylor’s hand after being whitewashed 7-0 in the 2002 PDC final. After retiring Chumbawamba’s dance-rock classic Tubthumping in 2005, as his theme, Manley ensured Tony Christie’s 1971 hit (Is This The Way To) Amarillo would be a memorable addition to the best darts walk-on music. That same year, Christie re-recorded the song alongside Peter Kay, in aid of Comic Relief. The music video contained star-studded cameos from Brian May and Cliff Richard, and re-recording peaked at No.1 in the UK for seven weeks.

4: Vincent van der Voort: Give It Up (by KC And The Sunshine Band)

Known for his quick throwing action, two-time PDC World Darts Championship quarter-finalist Vincent van der Voort is popular name on the circuit. Not only is Give It Up a dance classic, but the chorus is great to chant van der Voort’s name to. Originally released in the US in 1982, it successfully battled the disco backlash and remains KC And The Sunshine Band’s most successful single.

A shoo-in among the best darts walk-on music, Tina Turner‘s 1989 classic The Best is worthy of soundtracking any great sporting achievement. Originally a Bonnie Tyler song, Austrian darts player Mensur Suljović’s choice of walk-on music remains one of the most iconic tracks of the 80s. Appealing on Turner’s seventh solo album, Foreign Affair, The Best was a global smash, becoming a Top 10 hit across the world, including the UK, Germany and Australia. Suljović will be hoping his walk-on music becomes reality in his quest for his maiden PDC World Darts Championship title.

This man needs no introduction. With the most world championship wins in history – and arguably the greatest darts player of all-time – Phil “The Power” Taylor was a truly unstoppable force that dominated the sport since PDC championship’s inception in 1994. Winning eight consecutive tournaments between 1995 and 2002, his walk-ons were as powerful as his performances, aided by a song that was in keeping with his nickname and darts ability. A product of German Eurodance group Snap!, who also produced the club classic Rhythm Is A Dancer, (I’ve Got) The Power was a 90s dance anthem that, to this day, never fails to fill floors.

What is it with Dutch players having music that scans perfectly with their names? Upping the ante on Vincent van der Voort is Michael van Gerwen, who, in 2014, became the youngest winner of the PDC World Darts Championship, aged just 24. Seven Nation Army has not only been a standard in sports chants, it has branched out into politics (ahem, Jeremy Corbyn). What gives it the edge among other entries in the best darts walk-on music, however, is not only how perfect it is for chanting Michael van Gerwen’s name to, but the player’s inspired choice to mix it with the enigmatic, electrifying motif from Pink Floyd’s Shine On You Crazy Diamond, Parts 1-5. David Gilmour’s mystifying four-note guitar motif announces van Gerwen’s arrival, building tension before the crowd chuck their pints around to The White Stripes’ 2003 rock anthem.