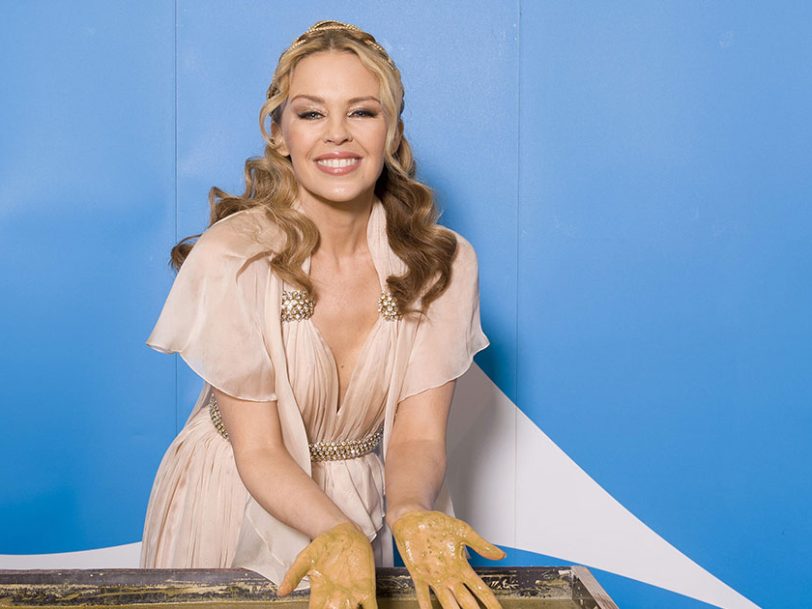 ‘Aphrodite:’ How Kylie Minogue Re-Emerged As A Dancefloor Goddess

Turning to the man behind Madonna’s ‘Confessions On A Dance Floor’, Kylie Minogue created her most cohesive album yet in ‘Aphrodite’.

The decision to let producer Stuart Price helm 2010’s Aphrodite coated Kylie Minogue’s 11th album in a characteristic, cohesive dance honey that gives it an elegant, warmer flavour than that of its predecessor, X, which had been recorded just three years earlier with a battalion of collaborators while Kylie was still recovering from cancer.

“My strongest instinct was: let this be a Kylie record”

There were plenty of things Price – who had masterminded Madonna’s 20005 disco throwback, Confessions On A Dance Floor – insisted on when he accepted the project: the record would contain just 12 tracks, and Price also proposed to dial back on the “over-perfected, over-produced” vocals that Kylie needn’t rely on. “We didn’t do a lot of smoke and mirrors with computers,” he recalls. “My strongest instinct for everything was: let this be a Kylie record.” The Australian icon responded warmly to the approach. “I felt confident with him,” she said. “He allowed me to shine.”

Aphrodite’s lead single, All The Lovers, opens the album, and its euphoric echoes of Studio 54 and 70s hedonism became a big hit in summer 2010 – reaching No.3 in the UK and topping the Billboard dance charts. One of the best Kylie Minogue songs, All The Lovers has become one of the classic Kylie singles and regularly features in her setlists to this day. The album’s second single, Get Outta My Way, is a dazzling piece of Europop but it fell foul of changing market dynamics in which physical sales were now largely eclipsed by digital downloads, with streaming not far in the future.

Of Aphrodite’s other singles, Better Than Today had a sharp, contemporary production, while the fourth release, the anthemic Put Your Hands Up (If You Feel Love), received a widely celebrated remix by PWL legend Pete Hammond.

Released in her homeland on 2 July 2010, and following in the UK on 5 July, Aphrodite served as a generous tasting menu of many of the critical elements of a great Kylie record. Closer features an understated Pet Shop Boys sense of synth theatre, while Everything Is Beautiful (co-written by Keane’s Tim Rice-Oxley) is a breezy, midtempo cut not dissimilar to the sort of softer pop numbers to be found on Kylie’s next album, Kiss Me Once.

Aphrodite’s title track is its most obvious throwback to the 80s, with an urgent funk groove playing off against lighter synth flourishes. It’s entirely the sort of song you could imagine Paula Abdul – or even Janet Jackson – recording at the end of the decade that made all three women famous. There’s more retro styling on the bubbly Illusion, one of the album’s slickest earworms – once heard, those charismatic bleeps are hard to shake.

A more contemporary dance production bathes Too Much in rich, urgent synths. This cut, written by Calvin Harris and Jake Shears of Scissor Sisters, who had suggested Stuart Price produce Aphrodite, is undoubtedly one of the strongest on the record and would have made a strong choice of single. Cupid Boy maintains the pace – unsurprisingly so, given that Sebastian Ingrosso of Swedish House Mafia scores a writing and production credit on it.

A fluid performance piece elevating Kylie to another level

Looking For An Angel, along with Illusion, is the only track to carry a sole Price-Minogue song credit. A frothy Europop concoction, it’s perhaps Aphrodite’s lightest moment but, given time, the melody eventually cuts through. In contrast, album closer Can’t Beat The Feeling (no relation to the Justin Timberlake pop anthem) is an immediate, euphoric slab of synth energy that’s among the record’s strongest moments.

Aphrodite was billed as a celebration of the dancefloor and, while that ambition could be applied to many of the best Kylie Minogue albums, the framework Price built around the project truly elevates it to another level, making the album a fluid performance piece with the Australian icon truly accomplished in her lead role. After the personal difficulties of the previous few years, Aphrodite’s strong international sales and great reviews triumphantly signalled the start of a new era for the star, in which critical acclaim finally caught up with her long-standing commercial success.

Find out where ‘Aphrodite’ ranks among our best Kylie Minogue albums.