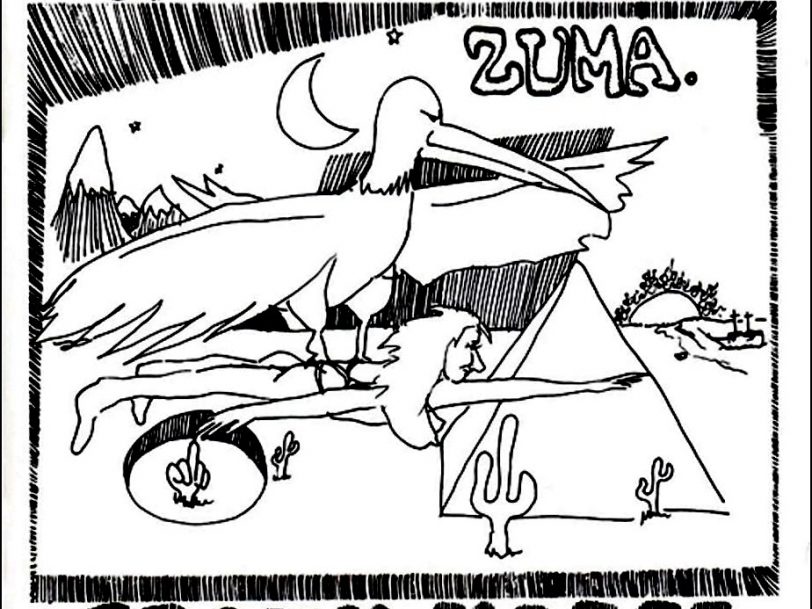 ‘Zuma’: How Neil Young Led Crazy Horse Back To The Light

Released following his doom-laden ‘Ditch Trilogy’, the ‘Zuma’ album was ‘like the rebirth of a band’ for Neil Young And Crazy Horse.

Neil Young’s Zuma album came out on 10 November 1975, just five months after the final instalment of his dark “Ditch Trilogy” (Time Fades Away, Tonight’s The Night and On The Beach), and it reunited the singer-songwriter with a revitalised Crazy Horse that now featured rhythm guitarist Frank “Poncho” Sampedro. The album, named after Zuma Beach, in Los Angeles, where the album’s co-producer David Briggs had a house, featured nine Young compositions, on which he sang and played guitar and piano.

Young, who initially considered calling the album My Old Neighbourhood or Ride My Llama, said that during the period working near Zuma Beach he was writing a lot of weird songs “about Peru, the Aztecs and the Incas. Time travel stuff.”

Zuma came out on Reprise Records three years after the death of Crazy Horse’s original rhythm guitarist, Danny Whitten, who died of an overdose following his dismissal from the band. As well as Young and new man Sampedro, the core Crazy Horse line-up retained Billy Talbot on bass and Ralph Molina on drums, both of whom had played on the 1969 Young-Crazy Horse album Everybody Knows This Is Nowhere. “It was a different Crazy Horse. It was like the rebirth of a band. We all just learned a lot about each other and just hung out and had a lot of fun really,” remembered Sampedro.

The album opens with the brief, simple rocker Don’t Cry No tears, a song the Canadian Young started writing when he was in Kelvin High School, Winnipeg. Side One of the album’s original vinyl also includes Danger Bird, whose lyrics allude to the breakup of his relationship with actress Carrie Snodgrass. Pardon My Heart is a tender acoustic ballad, which features veteran session man Tim Drummond on bass, and Lookin’ For A Love, a song of hope about finding a new relationship, was recorded at Broken Arrow Ranch, a property of about 1,000 acres near La Honda, California, which Young bought for cash in 1970. Barstool Blues, a maudlin, disconcerting song that is a favourite of Norah Jones, closes the opening side of Zuma.

After Stupid Girl and Drive Back comes Cortez The Killer, the seven-and-a-half-minute masterpiece, with a stirring guitar solo from Young, that is at the core of Zuma. Young also began writing Cortez The Killer while he was a student. In a 1995 interview with Mojo magazine, Young said the song was a combination of imagination and knowledge about the Spanish conquistador’s bloody arrival in the New World. “What Cortez represented to me is the explorer with two sides, one benevolent, the other utterly ruthless,” he revealed. “I mean, look at Columbus! Everyone now knows he was less than great, and he wasn’t even there first. It always makes me question all these other so-called ‘icons’.” The song ends with a fade-out because a power surge caused the original recording to stop before an additional final verse was captured. Young was sanguine about the hitch, remarking that he “never liked that verse anyway”.

Frank Sampedro later said he could not recall much about the missing lyrics. “Briggs got the power back on. We listened to where it dropped out and then punched back in right in the right place,” he said. “We did lose the third verse. Something about ‘a rocky grave’. Neil never sang it again.”

One day at the house, Young looked out of the window of the dining room and saw a van parked in the driveway, “with a guy listening to us”. When they went to investigate, they found out the mystery visitor was Bob Dylan. In his autobiography Waging Heavy Peace Deluxe: A Hippie Dream, Young said that Dylan came inside and sang a blues tune with the band, adding, “On a break, Bob and I took a walk around the neighbourhood, talking about the similarity in some of the paths we had each taken. It was the first time we had ever really talked. I liked him.”

Young made his name in Buffalo Springfield, and his fellow band member Stephen Stills, who was also part of Crosby, Stills, Nash & Young, played bass and sang backing vocals on Through My Sails, Zuma’s closing track. For this lovely song, Young also brought back David Crosby and Graham Nash to sing backing vocals. They were all joined by congas player Russ Kunkel.

The memorable dreamlike cover image for Zuma, which features the images of birds, snow-capped mountains and a cactus-strewn desert, was based on a pencil sketch by artist James Mazzeo. “The album Zuma is the first album we made with Crazy Horse after Poncho joined the band. It’s one of my favourites. The cover is by Mazzeo and came out of a conversation we had on a day trip from the ranch to Zuma,” said Young. Zuma was chosen by Lou Reed as one of his favourite albums of 1975. It remains dear to the hearts of Neil Young fans.

Check out our best Neil Young songs to find out which ‘Zuma’ track continues to back in sun.