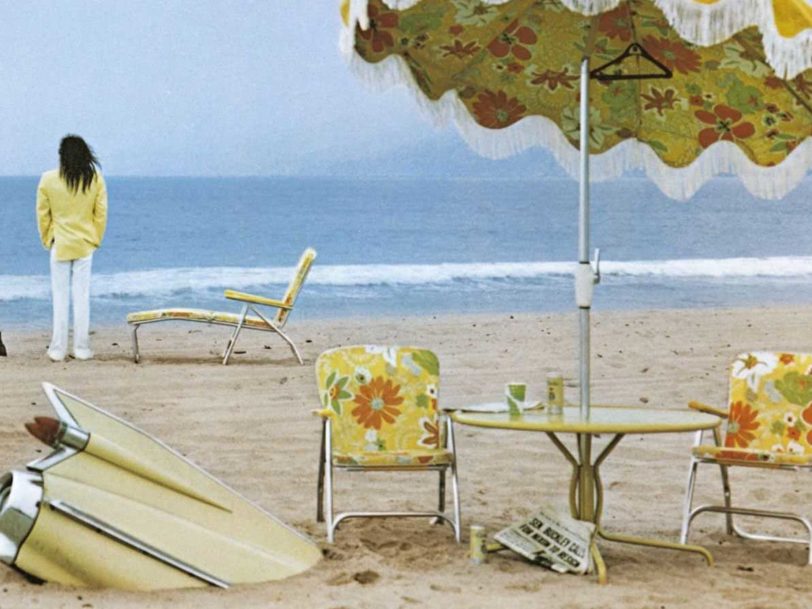 On The Beach: A Dark Treasure From Neil Young’s “Ditch Trilogy”

Recorded while Neil Young felt lost at sea, ‘On The Beach’ remains an intensely introspective masterpiece from ‘a period of disillusionment’.

On The Beach, which took two months to record in early 1974, was the first studio recording Neil Young released following the huge success of 1972’s Harvest, despite the fact that he had already recorded and mixed an album called Tonight’s The Night.

Part of the so-called “Ditch Trilogy” of albums that also includes Time Fades Away and Tonight’s The Night (which eventually came out in 1975), On The Beach is a melancholy, intensely introspective triumph. The recording sessions for the album were chaotic, however, and Young’s co-producers, David Briggs, Mark Harman and Al Schmitt, sometimes struggled to keep control of the drug-fuelled, alcohol-drenched days spent recording at Sunset Sound in Hollywood.

Listen to ‘On The Beach’ here.

On The Beach was made during a time when the 28-year-old Young’s life was in a tailspin. His relationship with actress Carrie Snodgress (the mother of his first child) was beginning to come apart at the seams – something suggested in the embittered song Motion Pictures (For Carrie). Young was also heavily taken by a cocktail of sautéed marijuana and honey which, he told a crowd at a preview show at New York City’s Bottom Line, he and the crew called a “honey slide”.

“It was a period of disillusionment”

All this turmoil added to the mix of material that came out when he transformed his maudlin thoughts about contemporary North America and his own problems into songs. Young told his biographer Jimmy McDonough that the time of On The Beach was “pretty dark, not really that happy”, adding, “I think it was a period of disillusionment about things turning out differently than I had anticipated.”

At just two minutes and 40 seconds, Walk On, the album’s opener, is the shortest of the eight songs on the record. The longest is the nine-minute closer, Ambulance Blues, which is about drug abuse, a fractured society and the disgraced US President Richard Nixon. It features some excellent fiddle playing from Rusty Kershaw. Placed in the middle, Vampire Blues is about the blood-sucking exploits of the oil industry.

“This was about America in the 70s”

Elsewhere on the album, past encounters with with the psychotic cult leader Charles Manson, who was jailed in 1971 for conspiracy to commit murder, inspired the song Revolution Blues. Perhaps On The Beach’s darkest moment, it concludes with the lines, “Well, I hear that Laurel Canyon is full of famous stars/But I hate them worse than lepers, and I’ll kill them in their cars.”

David Crosby’s fine rhythm guitar playing, along with the drive of Levon Helm’s drumming and the power of Rick Danko’s bass lines, add to the impact of the disturbing song, as does Young’s furious guitar solo.

Young explored the contradictions of his personality on On The Beach’s haunting title track (“I need a crowd of people, but I can’t face them day to day”), a song which became a favourite of Thom Yorke, who covered it with his band Radiohead. The other tracks on the album are the gentle See The Sky About To Rain and For The Turnstiles, on which Young played banjo.

“It makes me sad remembering that part of my life”

Released on 19 July 1974, On The Beach featured a marvellous cover design by Gary Burden, who died in 2018 at the age of 84, leaving behind a legacy of brilliant artworks that also included covers for Joni Mitchell and The Doors. Burden designed more than a dozen album sleeves for Neil Young, and told the Canadian Broadcasting Corporation in 2015 that his favourite of all was On The Beach, for which he dressed Young in cheap polyester clothing. “This was about America in the 70s, when everything was cheaper than it looks,” Burden said.

The cover features a photograph (taken by Bob Seideman) of a beach scene, the fin of a Cadillac car jammed into the sand beside some yellow outdoor furniture, on which sits a Coors beer can, near a desultory potted palm, with a shoeless Young in the background, his back to the camera. Young later agreed that the image was special. “On The Beach had one of my favourite covers by Gary Burden,” he recalled. “We had a wonderful day gathering and assembling all the things in the image, before we put them on Santa Monica beach and shot the cover. Looking back on this album, somehow it makes me sad remembering that part of my life.”

On The Beach, with its disembodied bleak message (“The world is turnin’/I hope it don’t turn away”) remains a masterpiece of its time.

Check out our best Neil Young songs to find out which ‘On The Beach’ track coast into view.