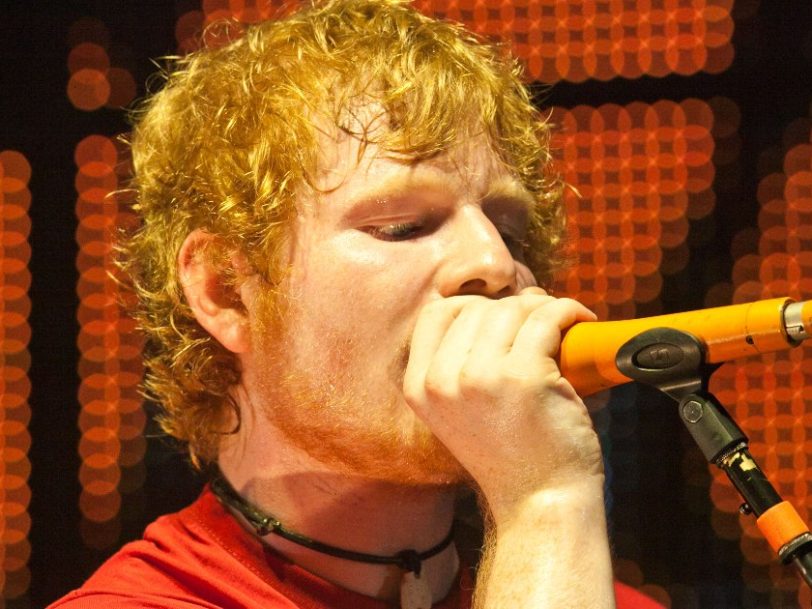 Streamlining R&B into his mix of rap and acoustic folk-pop, the success of Ed Sheeran’s second album, ‘×’, elevated him to pop greatness.

After the successful release of his debut album, +, in 2011, Ed Sheeran and his sizzling combination of folk guitar and pop-rap crossover appeal was fresh off the griddle. Having made commercial inroads into America with The A Team – which reached No.16 on the US Hot 100 – the singer-songwriter was now fully poised to take a leap into pop superstardom with his make-or-break second album, × – aka “Multiply”.

Though it would have been easy for Sheeran to rely on the acoustic balladry that had made him a household name on +, the singer-songwriter took some bold decisions on a new musical direction for the follow-up. Working with big-name producers such as Pharrell Williams and Rick Rubin, Sheeran ended up cutting many tracks that leaned into R&B. “I spent a lot of time with hip-hop producers and ended up experimenting,” Sheeran later admitted of his bid for danceability. In retrospect, it was this playful spirit of collaboration that would soon multiply Sheeran’s prospects on the pop charts.

“I started out making another acoustic record and it turned into a neo-soul-funk record!”

Though Sheeran preferred the idea of releasing the acoustic ballad One as ×’s lead single, Taylor Swift and Sir Elton John persuaded him to choose Sing instead. Released in April 2014, this Justin Timberlake-esque slice of acoustic pop-funk, full of acoustic stabs and synthy pops, was the feverish result of a studio-based collision with Neptunes mastermind Pharrell Williams, whom Sheeran had first met at the 2013 Grammy Awards.

Immediately peaking at No.1 in the UK, Sing became Sheeran’s biggest US hit to date, charting at No.13. Fusing the sound of Timberlake’s Justified-era cuts such as Rock Your Body and Like I Love You with his own trademark style of loose-lipped rapping, it was the perfect way to reintroduce the singer-songwriter to pop audiences both at home and abroad. Having “started off making another acoustic record,” Sheeran recalled, “it turned into a neo-soul funk record!”

By the time × was released, on 20 June 2014 – emblazoned as it was with one of Ed Sheeran’s increasingly bold artworks: a minimalist black cross against a green background – fans were hungry for more. While retaining the melancholic and relaxed vibe of its predecessor, × offered a more refreshingly expansive collection of songs. The haunting, MDMA-inspired thrum of Bloodstream – said to have been inspired by a drug-laced trip to Ibiza, during which Sheeran fell in love with a beanbag – sits comfortably alongside the bright and optimistic Tenerife Sea. Swimming from piano-based pop (Nina) to swaggering R&B (Runaway) and a boom-bap workout (The Man), × took all the ingredients that made up + and multiplied them tenfold.

Given the celebrity circles that Sheeran now found himself in, it was inevitable that these new experiences would spill over into his songwriting on ×. Nowhere is this more evident than on the pop-rap vitriol of Don’t. Released as the album’s second single, in August 2014, it was a vicious diss track against a famous pop star Sheeran found himself in a love triangle with – a story he admits was 100 per cent true. “I could have gotten nastier,” he confessed. “There was more shit that I didn’t put in.”

A bit of detective work makes it possible to hazard a guess as to the identity of the mystery girl who was “only looking for a lover to burn”, but Sheeran wisely kept tight-lipped on the matter. Despite the controversy aroused in gossip magazines, Don’t sold a whopping 4.4 million copies in North America, taking Sheeran into the US Top 10 for the very first time, as well as peaking at No.8 in the UK.

By now, Sheeran’s status as a pop star was a foregone conclusion, partly thanks to his hard work touring as a support act for Taylor Swift, but also due to his savvy understanding of what made US radio stations tick. This, in turn, meant × accelerated Sheeran’s ascendancy to stateside superstardom. All he needed now was one extra push to break through…

“This is the one that will change everything for us”

Originally written on the spur of the moment, on a guitar given to him by One Direction’s Harry Styles, Sheeran wrote Thinking Out Loud in the kitchen with his co-songwriter Amy Wadge. “This is the one that will change everything for us,” he told her. Chosen to be released as ×’s third single, in September 2004, Thinking Out Loud was a love song par excellence: channelling both the sultry side of Marvin Gaye and the guttural spirit of Van Morrison, it was destined to go down in history as a modern pop classic.

Reaching No.1 in the UK and No.2 in the US, Thinking Out Loud was a late addition to × but, as an irresistible paean to everlasting love, it succeeded in changing everything – just as Sheeran predicted. Not only did it become the first-ever single to spend a whole year in the UK Top 40, it became Britain’s sixth biggest-selling single of all-time, and went on to sell 12 million copies in the US. Subsequently, it has come to stand as one of the very best Ed Sheeran songs.

If there was one single moment that catapulted Ed Sheeran to unparalleled heights of fame, it was Thinking Out Loud. Though it missed out on the US top spot by a whisker, the song still proved to be a crossover smash that bridged the gap between Sheeran’s more urban, R&B-enamoured fanbase and the wider record-buying public. A true testament to his development as a songwriter, Thinking Out Loud made good on Sheeran’s potential. He’d finally gone global.

“× is a mixture of a lot of things. It’s definitely a step forward for me musically”

Following a successful remix of Bloodstream by Rudimental, the final single to be released from × was Photograph, a song co-written with Snow Patrol’s Johnny McDaid that Sheeran considered to be “the backbone of the whole record”. In fact, instead of Thinking Out Loud, Sheeran thought that Photograph that would be his breakout hit, but history proved otherwise. Released in May 2015, Photograph peaked at No.10 in the US and No.15 in the UK, accompanied by a charming music video featuring home movies of the singer as a child.

Almost doubling the sales of +, × went on to sell more than nine million copies worldwide. Shaking off the so-called curse of the “difficult second album”, Sheeran had taken his early fame in his stride and broadened his fanbase by expanding on the acoustic folk-pop foundations of + by adding contemporary hip-hop and R&B to his sound. “× is a mixture of a lot of things,” he said. “It’s definitely a step forward for me musically.”

To this day, × remains Sheeran’s best-selling album, and it has proven to be a pivotal moment for him as an artist. While staying true to his instincts as an acoustic-folk balladeer, the record saw him sharpen his pop-rap edginess and bring a more polished, R&B-tinged dynamism to his songs. By perfecting his own chart-busting formula, Sheeran had multiplied his commercial fortunes and succeeded in transforming himself into one of the world’s biggest pop stars. It wouldn’t be the last we’d hear of him, that’s for sure…