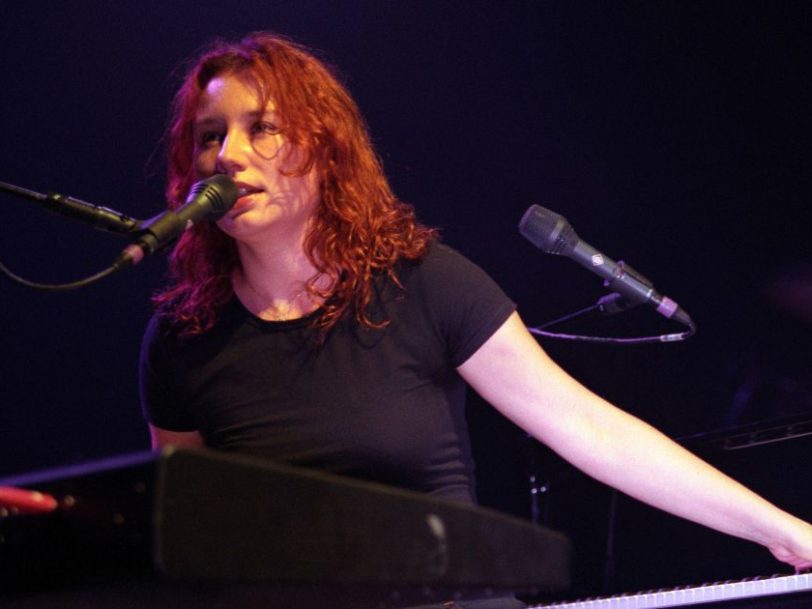 A song whose meaning has evolved over time, Winter’s warm beauty has led Tori Amos to reflect on family life in different ways.

Tori Amos is someone who sees songwriting almost as a physical presence. “For a long time, I didn’t appreciate that for certain songs to show themselves to me, they have to trust that I am ready to carry them,” she wrote her 2020 book, Resistance. She has spoken of her songs as like “filaments of light” which, as she composes them, come alive, creating structures of colour and brightness. The song Winter, from Tori Amos’s debut album, Little Earthquakes, is as luminescent as the snow itself: its story can help us appreciate the singular approach of Amos.

Listen to the best of Tori Amos here.

Finding her voice: “I needed to battle for what I believed in”

Tori Amos found that her early-90s subject matter, initially, wasn’t an easy sell. “They were looking for certain types of songs,” she said in 2014. “You didn’t get a publisher saying, ‘Tori, write me something harrowing and uncomfortable.’” But she was a woman in the second half of her 20s, no longer naïve; and was already a veteran of the mainstream game.

Amos had been the singer-songwriter with the big-hair pop band Y Kant Tori Read. Their sole, self-titled 1988 album flopped, and badly. She decided to trust her instincts instead – a stance that has made her one of the most influential female musicians of all time. “After Y Kant Tori Read, I realised that I have to look myself in the mirror every morning,” she said in 2001. “I decided that I needed to battle for what I believed in. If I needed to have a battle with the president of Warner Brothers, then so be it. I was prepared to do that.”

By 1991, Amos had 13 new, piano-driven songs, including Winter. She recorded these with producer Davitt Sigerson – but her record company rejected them (presumably thinking them too “harrowing and uncomfortable”). One of their suggestions was to replace the piano parts with electric guitar. Disheartened, but determined to fight for her vision, Amos worked on the songs further, dropped some from the original tracklisting (Winter was retained), added in others, and re-presented them to the label. The execs finally heard her. “There were suits who began to sit back and watch people react to these songs, and think, Hold on a minute…” she has said. The album that became Little Earthquakes had left the starting blocks.

Little Earthquakes is loved for its intimacy, the songs forming deep bonds with its listeners. The ideas behind Winter draw their power from Amos’ family. “When I first wrote Winter, there was a picture of my mother’s father, Papa, and then a picture of my father, in the snow,” she has said. Both of them had already had an enormous influence on her life and creativity.

Amos’ father was the Reverend Dr Edison McKinley Amos. “Although he was a man of the cloth, he was also a tenaciously pragmatic force to be reckoned with, especially if you were his teenage daughter,” Amos wrote in Resistance. She recalls a point in 1977 when she received a stern intervention from her father. In it, he expressed his displeasure that his daughter had been kicked out of her Conservatory (she had been admitted to the prestigious Peabody Institute, as a child prodigy, aged five), that she was rebellious, and that she was squandering her God-given musical gift. He declared he was taking matters into his own hands.

Edison took her to Georgetown, where he told her she would have to make the most of her musical abilities on smaller stages – bars and restaurants, rather than a concert hall. Father and daughter ended up in a gay bar, Mr Henry’s. “After I had played for several hours,” Amos wrote, “my dad and I were happy to be invited back to play the following Friday night.”

Calvin Clinton “CC” Copeland, her maternal grandfather, offered a different perspective to the traditional Christianity of her father. He taught his young granddaughter about dreams, nature and alternative medicine, along with just plain fun. “My grandfather had a big old black 1952 Buick,” she said in 1998. “I’d stand up in the back seat wearing my little hat and we’d go for a ride every day.” Tori’s brother, Mike Amos, said in 1996 how close Tori and CC were. “She was his last grandchild and came along after he had retired, so he spent a lot of time with her,” he said. “I think she does get some of her musical ability from him.”

Tori Amos’ breakthrough song: “They can see something in London and in a couple of days everybody knows about it”

Edison and CC combine to create the father character in Winter – directorial, tender, forward-thinking and painfully aware of the passage of time. Amos is an acute observer of people (“The most important skill a songwriter needs is to be able to listen. Like an elephant: ears the size of Kansas,” she has said), and the words in Winter feel like the spaces between what is said out loud. The “when you gonna love you as much as I do” lyrics sounds like the inner dialogue of the Reverend Amos as he castigates his daughter for her rebellion; “so many dreams on the shelf” feels like it comes from the older CC, perhaps something Amos caught in his glance as a child, and only understood many years later.

The UK, in particular, took to Winter and Little Earthquakes early on. On the cusp of the album’s release, in early January 1992, Amos relocated to London; it proved a savvy move. Released two months later, on 9 March, Winter was her first single to crack the UK Top 40, reaching No.25. (CD singles of various configurations were released around the world, some featuring her covers of The Rolling Stones’ Angie and Nirvana’s Smells Like Teen Spirit as B-sides, others featuring original songs The Pool and Take To The Sky.) “The music press there has a lot of power,” she said. “They can see something in London and in a couple of days everybody in the country knows about it.”

Winter’s legacy: “I don’t see these songs as old stuff, they’re evolving and I learn from them”

In later years, Amos has become more aware of how her songs are interpreted by others; that they make sense in someone’s own life in ways she could not have fathomed when she wrote them. She has described this process as even happening with herself and Winter. “Years later, I saw my daughter, Tash, and her father, running in the snow, and I would sing that song, and there would be that film running, of her putting her hand in her father’s glove. I wasn’t the little girl anymore. But I was. Both those films were running as I was playing it.”

One of the best Tori Amos songs, Winter is now over thirty years old, yet its warm beauty is ageless. “I don’t see these songs as old stuff, for me, because they’re evolving and I learn from them,” Amos said in 2014. “All of the songs take on extended meaning. And when I hear from other people about their experience with them, they become current with me, and I walk with them today.”

Find out which Tori Amos track ranks among the best 90s songs.