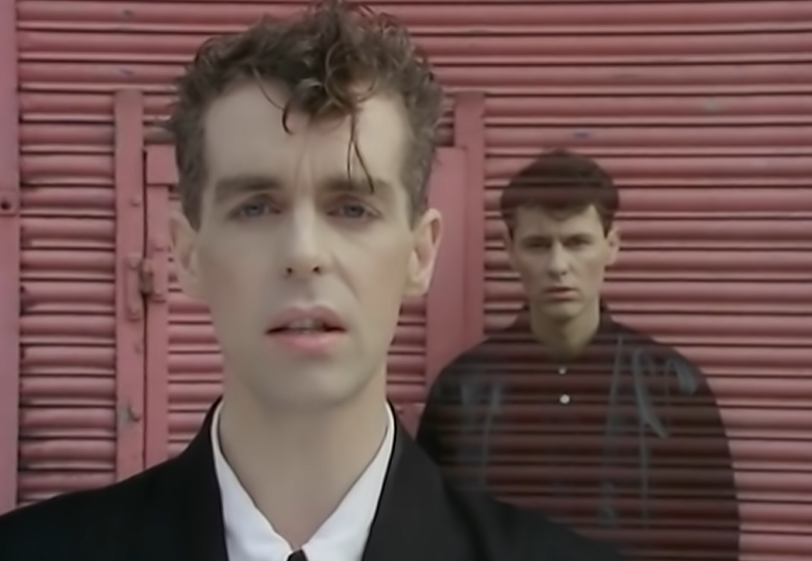 When Neil Tennant finally quit his day-job at Smash Hits on 5 April 1985, the farewell nod in the following issue confidently predicted that “… in a matter of weeks Neil’s pop duo The Pet Shop Boys [sic] will be down the dumper and he’ll come crawling back on bended knees”. If it wasn’t quite the send-off he’d expected (however good-humoured), Neil and Chris Lowe had much to thank the teen magazine for – not least the genesis of their first smash hit, West End Girls.

“I loved the pressure of living in a modern city”

It was an August 1983 trip to New York City, to interview The Police for the magazine, that secured Neil a meeting with underground dance producer Bobby O. He saw something in the demos Neil had been working on at a Camden recording studio with architecture student Chris. The melody of West End Girls – which would end up as the first Bobby O-produced Pet Shop Boys release – had been composed at the London studio and paired with a straightforward rap Neil had written and which, he admits, was inspired by The Message by Grandmaster Flash And The Furious Five. “I loved the whole idea of the pressure of living in a modern city,” he said. “The original music wasn’t great, though there was a fantastic bit at the end where Chris went into a Rhodes piano style, which we really liked at the time.”

The lyrics for the track were assembled in a stop-start fashion with, perhaps, the song’s most famous line – “Sometimes you’re better off dead/There’s a gun in your hand and it’s pointing at your head” – coming to Neil as he tried to get to sleep after watching a James Cagney gangster film. He thought it sounded so strong, he made the point of getting out of bed to scribble it down. With Bobby O clearing his diary to start the sessions, an instrumental was created for the rap from a chord change that Neil had overlaid on a strong bassline from Chris. With an unfinished final verse finally complete, the pair flew across the Atlantic to begin work. Bobby O’s team added overdubs and the recording stood out as an obvious choice for single release from the dozen songs committed to tape at the sessions.

“People assumed it was about prostitutes…”

West End Girls sneaked out on a small imprint on 9 April 1984 and, despite decent club support stateside and a smattering of interest across continental Europe, largely went unnoticed. Pet Shop Boys later claimed their ambition had only ever been to release a record that would get stocked in London’s trendy import shops, so, with that box ticked, it could easily have ended there. But another cut, One More Chance, was also issued as a single and, perhaps against the odds, interest from the majors started to build.

After a protracted legal tussle, Pet Shop Boys extracted themselves from the Bobby O deal and signed with the EMI subsidiary Parlophone, once home to The Beatles. As discussions went back and forth about which producer could be trusted for their major-label debut, it was finally agreed that Stephen Hague could be signed to produce a trial track. Pet Shop Boys were delighted – this was their preferred candidate all along.

Stephen wanted to slow West End Girls down a little and then layer it with cinematic atmosphere. Street recordings were added to the mix and original lyrics were cut to allow the track’s dramatic narrative to linger longer. The idea to add vocalist Helena Springs to sing a few lines added another dramatic top-note and proved a genius final flourish. Across five gruelling studio days, Stephen and the band had created a classic 80s single that remains the signature song of the UK’s most successful musical duo of all time.

“… It was meant to be about class”

Parlophone weren’t convinced, but the British public recognised a hit when they heard one. Released on 28 October 1985, the new version of West End Girls entered the UK Top 75 (at No.59) the week ending 23 November, and was No.1 just seven weeks later, dethroning Shakin’ Stevens’ seasonal classic Merry Christmas Everyone. To even the band’s surprise, the track followed its wider international success with that most coveted of trophies – the No.1 spot in the US, becoming arguably the country’s first rap chart-topper, in May 1986.

“A lot of people assumed the song was about prostitutes and, of course, typically, it didn’t even enter my head,” says Neil. “It was meant to be about class, about rough boys getting a bit of posh… And it’s about the idea of escape. There is a huge thing about escaping in our songs.”

Following West End Girls, Pet Shop Boys made the cover of Neil’s former employer Smash Hits in February 1986, successfully escaping the risk of returning to the nine-to-five ever again…