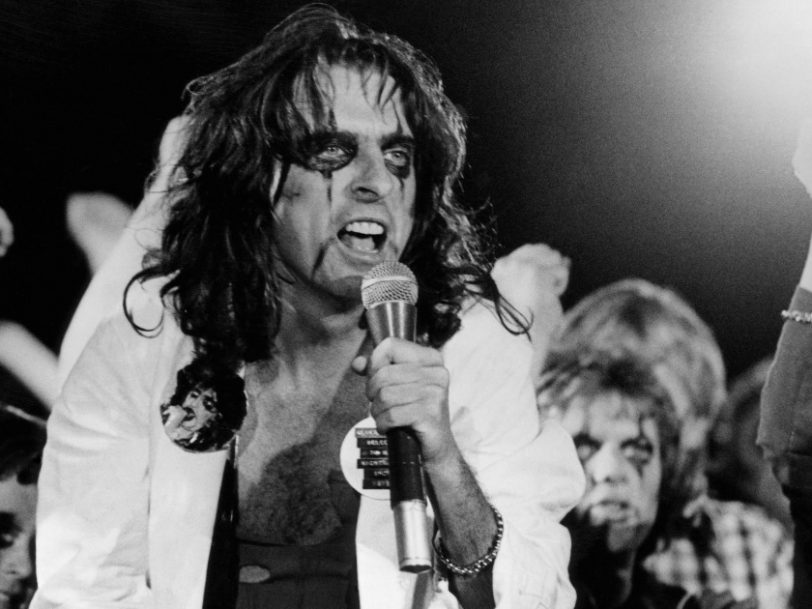 ‘Welcome To My Nightmare’: Behind Alice Cooper’s Shock-Rock Fantasy

Whether he planned it or not, solo stardom seemed destined to be thrust upon Alice Cooper after his namesake band gained a reputation – and no small amount of notoriety – for serving up gleefully ghoulish hard rock that draw from the era’s glam scene as much as it did from the entertainment industry’s time-honoured fascination with the macabre. “People would come and see us play and just assume that, as I was the lead singer, then I must be Alice Cooper,” the man born Vincent Furnier recalled for Louder in 2020. “Of course, later, when I would go solo for Welcome To My Nightmare, I’d really become Alice Cooper.”

Listen to ‘Welcome To My Nightmare’ here.

“A degenerate who could powerfully influence the young and weak-minded”

Formed in 1968, the Alice Cooper band had dragged their brand of shock-rock to the top of the charts with the albums School’s Out and Billion Dollar Babies. With them came live shows drenched in (fake) blood as the band embraced outlandish stage props which would be used to “execute” their singer. As Welcome To My Nightmare proved, however, there would be life for Alice Cooper far beyond these nightly dances with death.

When the band broke up, in April 1974, Cooper saw an opportunity to push these early theatrics to their limits with a collection of new songs which themselves sprang from a soundtrack commission. “We were first writing for a film, then we were writing for a TV show,” producer Bob Ezrin told Record World in 1976. When the project fell through, Cooper and Ezrin found themselves “sitting on seven or eight good songs, or song ideas, based on a theme that was no longer important to us… [and] tailored some of the material we had written earlier for the Welcome… concept”.

Free to take the songs in any direction he wanted, Cooper fashioned Welcome To My Nightmare as a gloriously over-the-top ride through the nightmares of a boy named Steven. Setting his stool out on the album’s opening title track, Cooper welcomed listeners to “a nocturnal vacation” that would chart his protagonist’s “breakdown”.

Removing all limitations – “Not by the players, not by the writing, not by anything or anyone,” as Ezrin recalled – Alice Cooper’s solo debut album expanded into a project way beyond the scope of a simple record. Musically, too, Cooper was entering new territory, as Ezrin called upon guitarists Steve Hunter and Dick Wagner, lynchpin musicians from Lou Reed’s equally concept-driven – if far more unforgivingly bleak – solo album Berlin, while the producer himself provided keyboard and synths.

Wager brought with him the album’s lead single, Only Women Bleed, a No.12 hit in the US which Wager and Cooper reworked from an old tune Wagner had written seven years earlier. “When Alice and I sat down and began writing for the Welcome To My Nightmare record, I played him that song, and he agreed that the lyrics weren’t that good,” the guitarist recalled. A tender ballad, it sounded at odds with much of the music surrounding it. However, with final lyrics that condemned the real-life horrors of domestic abuse, Only Women Bleed proved there was much more to the best Alice Cooper songs than phantasmagoric vignettes.

If Only Women Bleed was a surprising opening salvo from a man who once revelled in the nihilism of School’s Out, Welcome To My Nightmare as a whole revealed an artist who’d developed beyond the hard-rock strictures of his former band. Songs such as Devil’s Food, The Black Widow and Escape provided some of the muscular heft of yore, but it was the less typically Cooper-sounding material which hinted at his wider ambitions.

Delivering a pitch-perfect monologue between Devil’s Food and The Black Widow, iconic horror-film actor Vincent Price anointed Alice Cooper as the most theatrically ambitious musician since David Bowie. Many of the album’s songs, too, had Broadway designs. With its finger-clicking intro and high-kicking beat, Some Folks found a middle point between a West Side Story number and raunchy glam cabaret. Welcome To My Nightmare’s title track was no less stage-ready, its funky strut a perfect introduction to a new phase in the career of a frontman turned demonic ringleader. Named for the album’s protagonist, the song Steven, meanwhile, flashed a recurring descending piano motif that anticipated John Carpenter’s Halloween theme while Cooper sang in an adolescent register against a chanting chorus seemingly calling his hero to his doom.

“I didn’t know who ‘Steven’ was until I had used him in four or five albums,” Cooper later reflected on his YouTube show Ask Alice. “Then I started realising that Steven is the seven-year-old boy who lives in all of us. He’s the little boy who’s scared of the dark. He’s afraid of what’s under the bed… but he can’t wait to see what it is.”

Released into the waking world on 11 March 1975, Welcome To My Nightmare was just the beginning for a project which still largely defines Alice Cooper’s solo career. Less than two weeks after the album hit the shelves, the singer was on the road with his most extravagant stage show yet, bringing the tormented Steven’s nightmares to life on a nightly basis.

“I always had the grand idea that we could take the basic album and create a stage show from it,” Cooper explained to Louder. Drawing on his twin love of horror movies and musicals, Cooper sought to “make the album sound like a soundtrack for a movie or a play” – which, naturally, led the showman to stage one of the most memorable concert tours in history – replete with spider webs, an oversized bed, a giant-sized toy box and all manner of costumes, from skeletons to a nine-foot cyclops, plus a projection screen with slits that allowed the musicians to seemingly jump in and out of filmed sequences.

The props were made redundant in Vancouver when, amid the chaos, Cooper fell off the stage, breaking six ribs and splitting his head open so badly he needed 15 stitches to stop the real blood from flowing. With the singer’s reputation now preceding him, Australia’s then Minister For Labour And Immigration, Clyde Cameron, refused to allow “this sort of exhibition” down under, declaring Cooper “a degenerate who could powerfully influence the young and weak-minded” and refusing his application for entry into the country.

“I like writing from the point of view of a nightmare. I can really go anywhere”

Like Steven looking under the bed, however, fans couldn’t get enough of Welcome To My Nightmare, sending it to No.5 in the US, and buying enough copies for it to go platinum. Meanwhile, Cooper adapted his innovative stage show into an Emmy Award-winning TV special which scored a Grammy nomination when it was reissued on VHS, nine years after its original April 1975 broadcast. Vincent Price took on the role of Spirit Of The Nightmare in Alice Cooper: The Nightmare, expanding his album cameo into a fully fledged character performance for the small screen.

Alice Cooper’s solo debut has led to recurring Nightmares in the years since, lending its name to his The Nightmare Returns tour of 1986-87, and inspiring an album sequel, Welcome 2 My Nightmare, in 2011.

“The thing I like about nightmares is during them they seem logical,” Cooper explained to The Quietus at the time of Welcome 2 My Nightmare’s release. “You’re having dinner with Bob Dole and then you go to the baseball park and Godzilla comes in. That doesn’t make any sense at all, but it does when you’re dreaming. That’s what I like about writing from the point of view of a nightmare. I can really go anywhere.”

Check out our best Alice Cooper songs and find out which ‘Welcome To My Nightmare’ tracks still haunt our dreams.