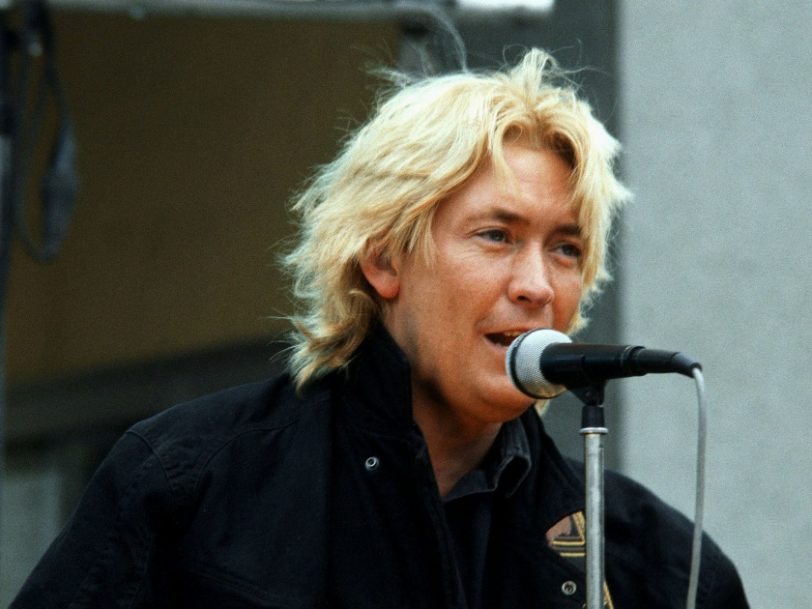 Caught in a riptide of disillusionment, Chris Rea’s free-flowing yet choppy 1983 album, ‘Water Sign’, led to a sea change in his fortunes.

Never comfortable with the PR games of showbiz, Chris Rea was beginning to grow tired of the music industry by early 1982. Tellingly, the cover of his self-titled fourth album saw the singer pose sullenly against a pink wall, sporting an on-trend mullet with an unamused expression on his face. “That was an example of the lethargy which had set in,” Rea later told Q magazine, recalling how his original artwork proposal had been rejected. Despite briefly considering quitting the music business in order to open an Italian restaurant, Rea tentatively started work on his fifth album, Water Sign, with his morale at a distinctly low ebb. Little did he realise that the record would prove to be a watershed moment…

Not that it was all smooth sailing. While recording the album, Rea found it difficult to interest his label bosses at Magnet Records, failing to secure adequate funds and finding that his songs were falling on deaf ears. “This terrible period set in when the record company was just turning down everything,” Rea remembered. Opting to play nearly all the instruments himself – including a drum machine – the songs Rea eventually finalised were noticeably skeletal but enticingly atmospheric and striking in their minimalism. Water Sign’s lead single, Let It Loose – a head-bopping mélange of pulsing synth beats – even reached No.85 in the UK upon its release in February 1983.

Though Let It Loose dented the lower reaches of the singles chart, Rea remained somewhat unsure of himself. “Quite frankly I didn’t know what to do. My management had virtually given up, I didn’t trust anybody,” he reflected in 1988. “I’d lost all interest in any of the romantic side of the business.” If anything, however, Rea’s mood gave Water Sign a melancholic air that would quickly become his trademark. Emerging from what he admits was a period of personal difficulty, the songs on the album spanned contemporary synth-pop and a fondness for bluesy guitar solos.

In fact, you’d never notice the malaise lurking behind the album’s genesis. Co-produced with David Richards, the ghost of disco loomed on its second single, I Can Hear Your Heartbeat, an upbeat dance-pop stomper with Chic-esque guitars and a catchy chorus. Not only did the single peak at No.60 in the UK, but its mix of Rea’s husky vocals and a funk-inspired swagger became an even bigger success on the continent, reaching No.15 in Belgium and proving that Rea still had an enthusiastic following in Europe.

“I turned in the ‘Water Sign’ tapes as demos”

At the heart of Rea’s ambivalence towards Water Sign lay the fact that he regarded most of the songs as unfinished works, lacking the high-end production values he always aspired to reach. “I turned in the Water Sign tapes as demos,” Rea recalled. “And they said, ‘That’s it, put them out.’ And it looked like once they’d released that album they were gonna drop us.” His pessimism was unwarranted, however, as Water Sign boasted some of the best Chris Rea songs to date.

Following its release, in March 1983, Water Sign shifted enough copies to reach No.65 in the UK, marking a turning point for Rea. From its breezy acoustic opener, Nothing’s Happening By The Sea (which features Montreux Jazz Festival founder Claude Nobs on harmonica), to its moody synth-rock finale, Out Of The Darkness, the songs swirled like a soft-rock whirlpool with frequent bursts of sensuous sax. The album’s third single, Hey You, failed to replicate the chart success of its predecessor, but still impresses with its shuffling rhythm and Rea’s impassioned vocal.

Far from being the contractual obligation album Rea considered it to be, Water Sign skirted the commercial boundaries of 80s power balladry and synth-based indulgence, transcending such fashionable whims thanks to its creator’s bold artistic choices. “It had a white cover with a dodgy photo on it and it was just like a contract album, you know?” Rea later said. “And lo and behold, it got rave reviews!” Despite his surprise at its success, Water Sign left listeners in little doubt that Rea made the right choice in abandoning his plans to become a restauranteur.

The fourth single to be released from the album was the beautiful acoustic ballad Love’s Strange Ways, which hypnotised listeners that summer with gentle synthesiser pops and a wearisome Rea vocal that ranks up there with his very finest; while touring in support of Water Sign, live performances of the song only served to highlight the songwriter’s flourishing talents. With its lilting guitar work and deeply-felt lyrics (“When it’s all over, nothing’s learned/Just a passion and a fool”), Love’s Strange Ways was a Phil Collins-esque slice of minimalism that remains a hidden 80s rock gem.

Partly thanks to heeding the advice of Elton John producer Gus Dudgeon and hiring Queen manager Jim Beach to represent him, Rea’s financial fortunes changed almost overnight and led to a career-boosting 60-date tour of Germany and a foray into mainland Europe to grow his fanbase. Closer to home, Water Sign saw particularly strong sales in Ireland, and Rea received an enthusiastic invite from Irish tour promoters. “It all started to come good in Ireland,” he said. “I went over there, it was like Beatlemania! So I stayed there a while, did a large tour.”

Going on to sell half a million copies, Water Sign saw Chris Rea successfully imbue his smooth soft-rock style with a Europop-tinged swagger that did wonders for his career. With impeccably arranged songs such as Midnight Blue, which builds to a blissful blues-rock slide guitar solo, it was obvious that, despite its minimalism, the album had seen Rea master a sonic template that would help prolong his songwriting journey. Without a doubt, it turned the tide and swept Rea into the uncharted waters of 80s pop stardom.