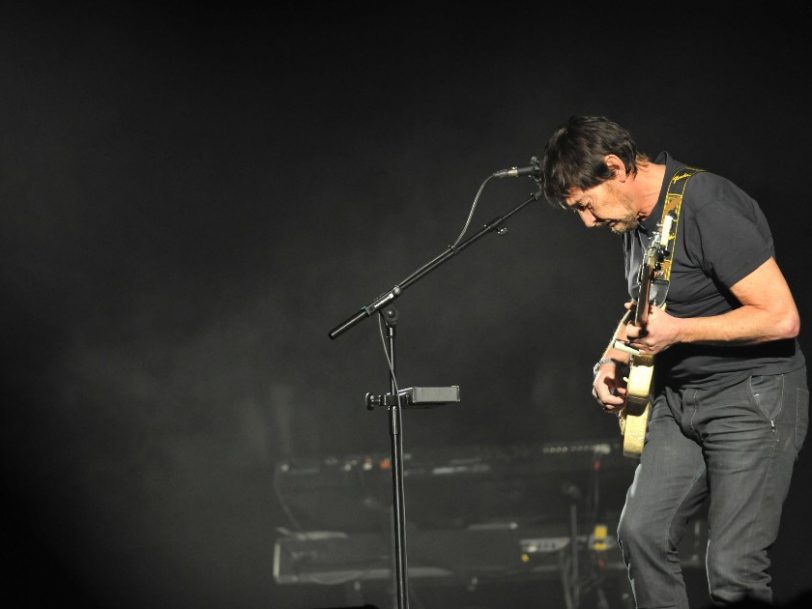 ‘The Road To Hell Part 2’: How Chris Rea Added Fuel To The Fire

Hitting the road yet again, Chris Rea’s sequel album, ‘The Road To Hell Part 2’, went off the beaten track to fuse guitar with dance rhythms.

By the late 90s, the popularity of dance music seemed to be leaving soft-rock musicians such as Rea standing in the cold, outside the nightclub doors. “Everyone’s using the same bloody computer now, which is a big shame for a lot of players,” the singer-songwriter himself noted. However, one of the best Chris Rea songs, On The Beach, had been sampled by Dutch DJs York to become an Ibiza hit in the summer of 1999, suggesting that Rea had a better chance than many of connecting with an audience drawn to electronic music. Aiming to combine his predilection for blues-based slide guitar and live musicianship with computer-generated beats, Rea fashioned his 15th album, The Road To Hell Part 2, with a mechanic’s precision.

Listen to ‘The Road To Hell Part 2’ here.

“I just went off left field with completely different ideas”

The first tantalising hint at Rea’s new direction came with The Road To Hell Part 2’s lead single, New Times Square, which bubbled with gentle, trance-like synths before engulfing listeners with a tsunami of thumping EDM beats. Released in October 1999, it surprised audiences by melding Rea’s throaty drawl with a euphoric club vibe.

Following on 15 November, The Road To Hell Part 2 revealed that Rea had more tricks up his sleeve: mixing bluesy riffs with clubby beats, the album picked up the traffic-related themes of its predecessor with the eight-minute opener Can’t Get Through. With its blaring sax and driving beat, this was a totally new musical highway for Rea. “I just went off left field with completely different ideas,” he admitted, telling interviewers how rock musicians needed to embrace new things. “Guys like Eric Clapton shouldn’t be saying music is dead.”

Having vaulted to prominence after writing a song about being stuck on the M25 motorway that circles London, Rea relished revisiting the concepts he explored on the original Road To Hell album, again mining his own family life for ideas. “I was genuinely inspired at how the man had changed in the traffic jam,” he said. Explaining that the first instalment was about being a father to young kids, he revealed, “This one is how those little kids are now teenagers, and he’s having to deal with teenage problems.”

Rea’s daughters, Josie (then 16) and Julia (11), had inspired him to tackle songs that shared his waspish views on modern parenthood. The rap-indebted Evil No.2 explores the inner mind of an errant teen, name-checking Eminem and blaming wayward, drug-taking behaviour on the lax morals of paper-chasing mums and dads (“I got a satellite dish, I’m all alone/With my little goldfish/And Eminem”). “It’s been something that I’ve been concerned about for some time,” Rea told the Daily Mirror. “While they’re off achieving, the child is in the bedroom having its mind completely screwed up. I don’t think that’s progress. Do you?”

At the time The Road To Hell Part 2 was released, the controversy around teenagers taking ecstasy was dominating news headlines, particularly after the death of 18-year-old Leah Betts in 1995. Rea’s song E tackles this subject head-on (“‘Tell me what’s so wrong with E’/That’s what I hear them say”). “E is a song about listening to three girls have a conversation about ecstasy,” Rea said. “They wanted to know the risks. It was my duty to tell them – to be honest with them.” By tackling a controversial issue in such a measured way, Rea implores parents to “talk about it” openly.

Just like before, Rea presents these very personal topics under the guise of a road trip, making The Road To Hell Part 2 a soft-rock ambulation aided by its dance-inspired production. The car radio becomes central to this journey, surfacing once again on I’m In My Car (“I don’t want to change a thing/This is my world you are sitting in”). “The other instance with The Road To Hell Part 2 is how happy men have got in cars,” Rea said, recalling how a friend of his would plan his drive home around his favourite radio show. “We are actually starting to enjoy this private space at the beginning and the end of each day.”

“When you open up to it, it’s just another way of making music”

Though it wouldn’t be right to call The Road To Hell Part 2 a fully-fledged dance record, it successfully hangs atmospheric synths and propulsive drum machine around Rea’s bluesy arrangements. A notable highlight is Last Open Road, which is built upon Rea’s experiments with guitar loops and sampling. “I took some blasting guitars, put them in a sequencer, and I had a lot of fun doing it,” Rea said.

Musically adventurous yet in keeping with Rea’s fondness for slide guitar, The Road To Hell Part 2 deserves credit for keeping pace with the popularity of dance music. “When you open up to it,” Rea said of his new approach, “it’s just another way of making music.” By finding a way to bridge the two worlds while bringing to life his pre-established themes of world-weary misdirection and parental anxiety, The Road To Hell Part 2 took fans on a detour unlike any Rea had led them on before.