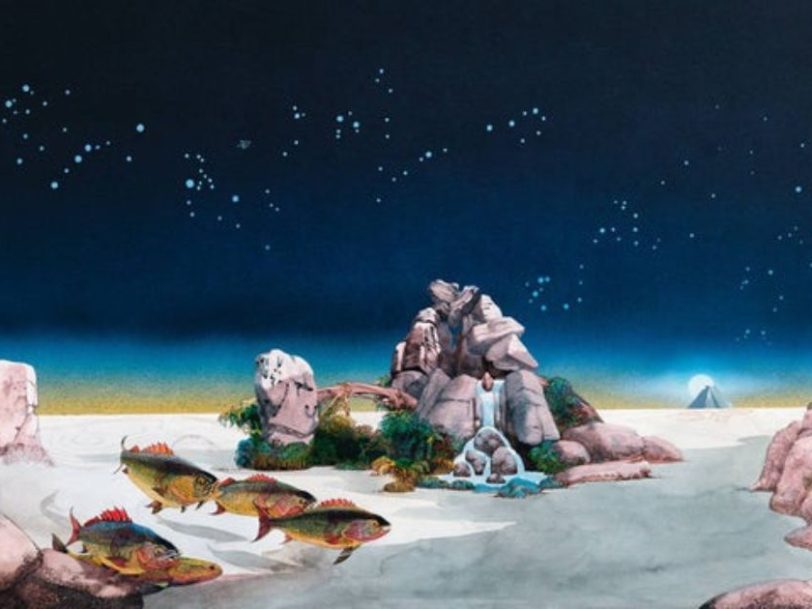 Thanks to the huge sales that greeted their 1972 album, Close To The Edge, progressive-rock pioneers Yes were at their commercial height as they began recording its much-anticipated follow-up, Tales From Topographic Oceans. Keen to dive deeply into lengthy and intricately-arranged compositions, singer Jon Anderson, guitarist Steve Howe, bassist Chris Squire, keyboardist Rick Wakeman and new drummer Alan White created a record that was more grandiose and thematically ambitious than anything they’d attempted to that point.

Turning in a philosophically-rich double album that ran to an hour and 20 minutes, Yes indulged themselves with four 20-minute-long songs, each with its own subtitle and taking up one side of vinyl. Teeming with musical ideas and swimming with Jon Anderson’s spiritualist musings, Tales From Topographic Oceans marked Yes’ most fascinating sonic voyage yet. Here is the story of how Yes unearthed hidden treasures from the deep-sea trenches of prog-rock in order to make waves with their pivotal fifth album.

Building on his fascination with Eastern philosophical concepts of the inner self, the idea for Tales From Topographic Oceans took hold when King Crimson drummer Jamie Muir gave Jon Anderson the book Autobiography Of A Yogi, by Hindu monk Paramahansa Yogananda. “We started talking about meditation in music,” Anderson later said. “Not the guru type but some really heavy stuff.”

Working long into the early-morning hours while on tour, Anderson and guitarist Steve Howe began to piece together ideas based on the four Shastric scriptures of Hindu teachings. “So positive in character were the Shastras that I could visualise there and then four interlocking pieces of music being structured around them,” Anderson would explain.

This sense of incorporeal splendour ebbs and flows through Tales From Topographic Oceans’ opening song, The Revealing Science Of God (Dance Of The Dawn), a shimmering 20-minute epic with mantra-like lyrics, a memorable descending melodic motif and Rick Wakeman’s whirling analogue synthesiser runs. Taking listeners from the dawn of light to the dawn of love, it’s a creation story told through the sonic prism of progressive rock, full of sprawling twists and rapturous turns.

“To us it wasn’t that complicated. Steve and I had a basic cobweb of ideas and we filled them up”

Given how Tales From Topographic Oceans was opening up Anderson’s mystic preoccupations with the third eye, his original hope was that the album would be recorded in the countryside, in order to allow him to be at one with nature. In the event, however, producer Eddy Offord convinced the singer to settle for London’s Morgan Studios. To get himself in a more rustic mindset, Anderson filled the studio with cardboard cut-outs of farm animals, and even put Wakeman’s keyboards on hay bales. “I was the only keyboard player who ever had to send his keyboard back for repair because it had lice. It was unbelievable,” Wakeman later joked.

This could well be why Side Two of Tales From Topographic Oceans showcased what Steve Howe described as a “much lighter, folky side of Yes”. The lilting, bucolic feel of The Remembering (High The Memory) sees the band float like bees to the honey-glazed riffs that bloom amid the song’s airy soundscapes. Heading back to the hive with a hop-footed groove, the song is a wistful work of wonder with a sting in its tail (“Stand on hills of long forgotten yesterdays/Pass amongst your memories told returning ways”).

Despite its meandering and convoluted structure, Howe felt The Remembering was “full of colour”, and Anderson was satisfied that, across the album as a whole, the songs’ extensive arrangements perfectly captured his intangible lyrical themes. “You see, to us it wasn’t that complicated,” the singer said. “Steve and I had a basic cobweb of ideas and we filled them up.” Like spiders spinning silk, Yes wove an intricate net to ensnare Tales From Topographic Oceans’ listeners with unbridled skill.

Taking up Side Three of the album, The Ancients (Giants Under The Sun) was described by Howe as “electronic mayhem turning into acoustic simplicity”, the guitarist conjuring the cosmic ether with droning distortion while Wakeman’s bubbling keyboards lead the way into a classical-inspired symphonic piece, punctuated with stabbing rock riffs. “We were colouring a big landscape in Tales but we went for some stark realities, too,” Howe admitted, “like on Side Three, where there was some very weird instrumental progressive stuff.”

In fact, some of Howe’s most emotionally affecting guitar work can be heard on Tales From Topographic Oceans’ closing song, Ritual (Nous Sommes Du Soleil). As if clutching at stardust with a jaw-dropping display of guitar-wielding virtuosity, the guitarist moves from painting a wondrous sonic picture to making mad brushstrokes with a galloping tempo, in order to keep up with Anderson’s catchy ad-libs. Before long, however, Ritual sweeps listeners back into the gyre with calm and meditative elegance.

As soon as Anderson sings the song’s subtitle, the band follow in his slipstream, Howe’s electric sitar work imbuing the melody with heart-rending weight. “That’s really romantic,” the guitarist later said. “Yes music has those contrasts. There is the beauty, but there is also anger.” Erupting with Alan White’s intense tribal drum solo before concluding with an acoustic piece that builds to Howe’s majestic guitar-led climax, it’s hard not to be swept up in the tsunami of creative ideas unleashed throughout Tales From Topographic Oceans.

Released on 7 December 1973, Tales From Topographic Oceans went straight to No.1 in the UK and sold over 500,000 copies in the US, where it peaked at No.6 on the Billboard 200. Remarkably, it also became the first album in the UK to earn a gold certification entirely due to pre-orders, proving just how eagerly-awaited Yes’ new music had become.

To this day, however, Tales From Topographic Oceans remains perhaps the most divisive album Yes ever released during their 70s pomp, its reputation perhaps tarnished by the fact that Rick Wakeman expressed his dislike of the album and left the band shortly after its release. Nevertheless, the record often stirs up reappraisals among fans who feel its contents holds its own among the best Yes songs, and the fact that it led to Yes playing two sold-out nights at Madison Square Garden, in New York City, proves the conceptual risks hadn’t dented their commercial prospects.

Speaking about Tales From Topographic Oceans years later, Steve Howe remained proud of what the band achieved. “We had so much space on that album that we were able to explore things, which I think was tremendously good for us,” he said. Awash in a briny stew of musical styles and complex arrangements, as well as a whirlpool of dizzying musical contrasts, Tales From Topographic Oceans not only remains one of the best Yes albums, but it also encapsulates progressive rock at its most adventurous and unique. It saw the band set sail into the unknown and come back with a remarkable tale to tell.