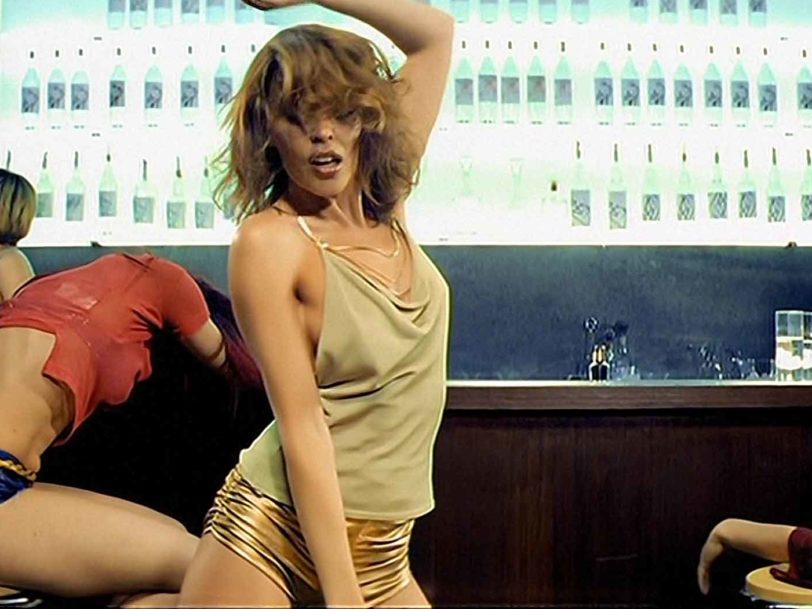 With Kylie Minogue having moved away from her pop-princess image to court an indie audience in the latter half of the 90s – establishing herself as one of the best 90s female singers in the process – there was a sense of reassessment over her career as the new millennium dawned. “There is much I want to achieve with my next album,” she said at the time, as she signed a new deal with Parlophone Records. “I am very enthusiastic to make a record that is unmistakeably Kylie.” With the first fruits of that partnership coming in the shape of Spinning Around, she did just that and more, ushering in an era in which Kylie not only reasserted herself as a mainstream pop star, she emerged as a fashion icon, too.

“I’d been running away from my history”

In moving from UK indie imprint Deconstruction to the legendary Parlophone label, there was a clear understanding that this new project – released in September 2000 as Light Years – was going to be a pop album. “I’d been running away from my old images, my history, pretending it wasn’t really me,” she said. “What I came to understand was that I was all of those people, the sum of those parts. Now I’m proud of who I am and what I do.”

In picking Spinning Around as the launch single for the album, Kylie transformed her image in a flash, introducing a look that has come to – in part – forever define her. We’ll get to those hotpants in a moment; but first the song that inspired them…

“No one thought we were creating an icon”

Spinning Around featured no less than four songwriters and, in a shift away from the approach Kylie had taken on the previous two albums, she seemed happy picking the best material available, rather than worry about putting her own mark on the compositions. Most notable of the four composers was Paula Abdul, the celebrated American Idol judge who had been a chart draw in her own right with hits such as Forever Your Girl, Straight Up and Rush Rush. The original Spinning Around demo that was brought to Kylie had “hit” written all over it, and there was an immediate concern the track might get offered to someone else.

With the song eventually secured, the then relatively unknown Mike Spencer was asked to produce the track, which he layered in a frothy disco confection that nicely bridged the Hi-NRG pop of Kylie’s Stock Aitken Waterman era with a slicker pop-soul sheen. Released on 19 June 2000, radio couldn’t get enough of it, and the song landed Kylie her fifth homeland chart-topper while becoming the first Kylie single to enter the UK charts at No.1 (and her first to peak there since 1990’s Tears On My Pillow). Spinning Around seemed to capture Kylie’s mood perfectly with a sense of spirited liberation that can only come from the confidence of knowing your place in the world. Ultimately, it was the right song at the right time, relaunching her to a public that suddenly remembered what they liked about the pop titan’s breezy x-factor in the first place.

“It was a total fluke”

Featuring in the video, a skimpy pair of second-hand gold lamé hotpants – allegedly sourced at a flea market – somehow became almost as famous as the singer, and created an overnight tabloid sensation. Stylist William Baker admitted they’d actually been a last-minute suggestion, telling a newspaper: “No one thought we were creating an icon. It was a total fluke.” Having helped Kylie’s posterior become almost as celebrated as her singing, the original pair later ended up in London’s Victoria & Albert Museum. “I was so self-conscious in them,” Kylie would report, “but it’s not like my bum can actually do anything, except wriggle.” And wriggle it did in the promotional clip that saw Kylie dancing in a nightclub, bathed in a golden tan. If anyone doubted her abilities as a flirtatious siren, this was the real deal.

Light Years – one of Kylie’s best records – showcased a range of different pop styles, but Spinning Around was the perfect introduction, featuring so much of Kylie’s hit DNA with a trademark melody wrapped in super-tight production. It didn’t reintroduce her to the US audience (she’d have to wait until the following year’s mega-smash Can’t Get You Out Of My Head for that) but, in the summer of 2000, it reset Kylie on the pop podium and, in one stroke, shaped expectation around everything to come.

Check out our best Kylie Minogue songs to find out where Spinning Around lands.