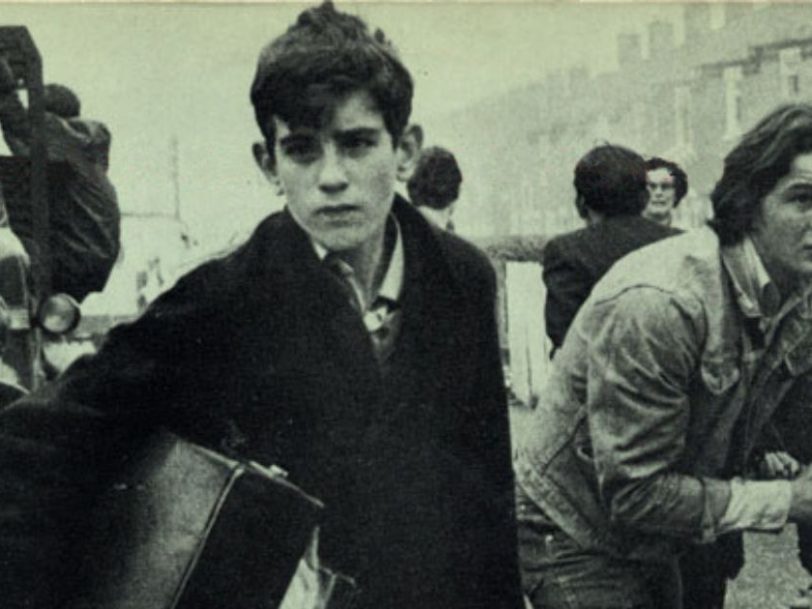 Released in the summer of 1980, Searching For The Young Soul Rebels remains one of the best debut albums of all time. The work of a unique vision, it saw Dexys Midnight Runners frontman Kevin Rowland take the spirit of punk and apply it to something wholly his own – a passionate and intense take on 60s soul and funk, with lyrics that reflected a lifetime’s worth of frustrations and insecurities, all topped off with a pinch of bravado. It sounded like nothing else back then, and it still bristles with a confrontational energy.

Listen to ‘Searching For The Young Soul Rebels’ here.

Rowland’s audacious punk-soul mix was a winning combination: the album’s lead single, Geno, was a UK No.1 in March 1980; it’s follow-up, There, There, My Dear, reached No.7 in June; and Searching For The Young Soul Rebels itself hit No.6 on the album chart. Yet, Rowland’s strict management of the group caused friction, and Dexys disbanded in 1981, leaving the singer to start again. The team that met in caffs were no more.

“No one else was talking about soul. It had potential to be radical”

Rowland and guitarist Kevin Archer formed Dexys Midnight Runners in 1978, after a stint in the short-lived punk band The Killjoys. The frenetic punk blast of that group’s sole single, Johnny Won’t Get To Heaven, may have been a world away from Searching For The Young Soul Rebels, but Rowland’s uncompromising attitude was already on display. Still, the pair swiftly became disillusioned with the limitations of punk and set out on a new path, determined to make music truer to their tastes – particularly the 60s soul and funk found on Stax and Atlantic Records.

Rowland explained his thinking to The Guardian in 2016: “No one else was talking about soul in 1978… That’s why it was cool to me. It had potential to be radical. To me, it was after punk and it was new and a bolt from the view and I loved soul but now I think it was a bit narrow. In fact, I wish we had never said that word, soul, because once you label something, you kill it. I think we should never have said anything except we’re Dexys and this is our music.”

Rowland and Archer took an all-or-nothing approach to the band: the singer treated Dexys Midnight Runners like a gang, and he had certain expectations of potential members, as he told The Guardian in an earlier interview, in 2006: “Anyone joining Dexys had to give up their job and rehearse all day long… We had nothing to lose and felt that what we were doing was everything.”

“We like to swim against the tide. Taking risks is very important to us”

The band cut their teeth on the live circuit, performing sets packed with covers of classic soul songs while developing their own original material during rehearsals. Their debut single, Dance Stance, was released in November 1979, but it stalled at No.40. The experience taught Rowland a lesson: the song had originally been called Burn It Down, until Dexys’ then manager, Bernie Rhodes, took a hand in the recording. When Rhodes’ production failed to catch alight, Rowland had the song re-cut for Searching For The Young Soul Rebels. Restored to its original name and placed at the start of the record, Burn It Down emerged as a fiery rabble-rouser, leading Rowland to reflect, “We learned that early on, that the wrong producer can totally screw your record up.”

Rhodes was fired and the band signed to EMI. There was a line-up change, too, as Andy “Stoker” Growcott replaced Bobby Ward on drums, and Andy Leek took Pete Saunders’ place at the organ. Dexys’ first single for EMI was Geno, a tribute to soul singer Geno Washington, written by Rowland and Archer. Rowland explained the subject matter to NME: “I was totally fed up with everything else at that time and so I started listening to all of Geno Washington’s old records and any other soul singles I could pick up for 10p around the markets.” It was an education put to good use, and Geno had it all: punchy horn riffs, a chorus readymade for the football terraces, and Rowland’s dramatic delivery. It gave Dexys Midnight Runners their first UK chart-topper.

Geno’s success only emboldened Rowland. “I think we’re becoming more intense,” he told The Face in 1980. “Musically we like to swim against the tide. Taking risks is very important to us… Inspiring other groups. That would be the greatest thing.”

“The lyrics just spilled out of me”

Striking while the iron was hot, Searching For The Young Soul Rebels was recorded in just 12 days with producer Pete Wingfield at Chipping Norton Recording Studios, in Oxfordshire, England. But the sessions did not go without incident. A dispute with EMI had been brewing and, on the final day of mixing, while Wingfield briefly left the studio, the band kidnapped the master tapes and drove them to Birmingham. The label demanded their return but, by that point, Dexys had started a UK tour. After resolving the issue and delivering the recordings the band realised they could have lost all their hard work – taking the tapes on the London Underground could have demagnetized them, wiping everything.

Luckily, there was no damage, and Searching For The Soul Rebels was released in all its glory on 11 July 1980. Burn It Down sets out Dexys’ stall perfectly, with Rowland sounding like he’s spoiling for a fight while paying tribute to some of Ireland’s greatest writers. He’d tell The Guardian, “I was sick of hearing anti-Irish prejudice all the time from really thick people and the lyrics just spilled out of me.” Equally heartfelt, Tell Me When My Light Turns Green finds Rowland wearing his heart on his sleeve, sharing his woes and pleading for a break as he sings to an utterly joyful, stomping soul backing.

Elsewhere, I’m Just Looking and I Couldn’t Help If I Tried are gutsy outsider ballads showcasing Rowland’s melodramatic and utterly spellbinding sob-singing style. Meanwhile, Seven Days Too Long (a cover of Chuck Wood’s Northern soul classic) and Thankfully Not Living In Yorkshire It Doesn’t Apply demonstrate Dexys’ ability to tear it up. The album closes with There, There, My Dear, a statement of intent to set the heart racing: Rowland addresses a character called Robin, a personification of the pretentious and phoney music scene the singer wants to transcend. Shackles broken, Rowland sings, “You see, Robin/I’m just searching for the young soul rebels,” as the band achieve the thrilling “new soul vision” Rowland has been yearning for.

The first iteration of Dexys Midnight Runners may have been short-lived, but Searching For The Young Soul Rebels’ power remains undimmed. It’s an ageless evocation of the excitement and frustration of youth, and a reminder of the singular vision, drive and talent of Kevin Rowland.

Looking for more? Check out our best 80s albums.