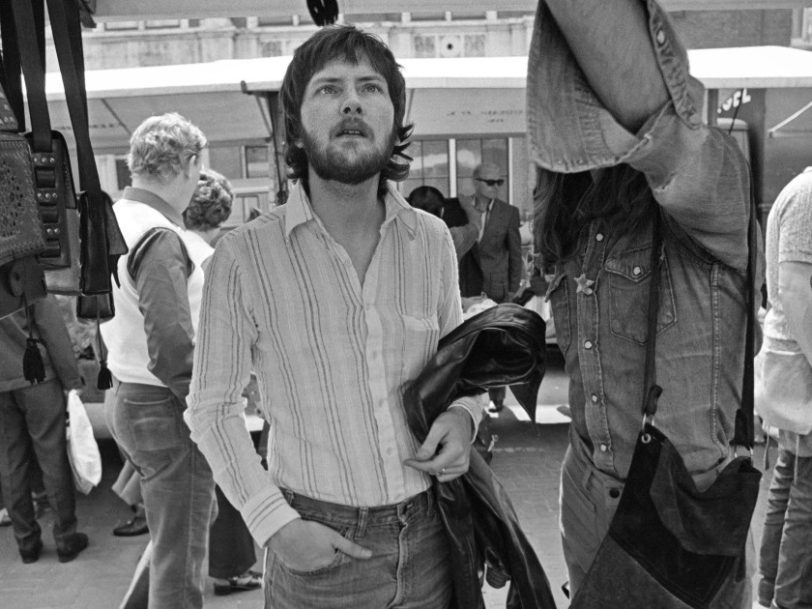 ‘Rest In Blue’: Why Gerry Rafferty’s Swansong Is The Perfect Epitaph

Emerging from the great beyond, Gerry Rafferty’s posthumous final album, ‘Rest In Blue’, is a fitting tribute to a legendary songwriter.

When Baker Street songwriter Gerry Rafferty died of liver failure, on 4 January 2011, at the age of 63, the whole of Scotland mourned the passing of one of the nation’s greatest musicians. A troubled soul with an extremely strong work ethic, Rafferty had, over the decades, amassed a large cache of unreleased recordings that were now left in the hands of his estate.

Listen to ‘Rest In Blue’ here.

It was reported at the time of his death that Rafferty had been recording songs up until a few months before his hospitalisation, so fans of the musician waited with bated breath for news of this material’s fate. Having been charged with safeguarding her father’s legacy, Gerry’s daughter, Martha Rafferty, began the process by launching an official website in tribute to him, but found the grief too overwhelming to revisit the treasure trove of material awaiting her.

“I just wasn’t emotionally ready,” she admitted to The Independent, acknowledging how it took a decade before she was ready to begin the work of compiling what would become her father’s 11th album, Rest In Blue. Eventually released on 3 September 2021, the record finally saw the light of day following the tenth anniversary of Gerry’s death. “Bereaving is a weird, non-linear process,” Martha added, “but somehow ten years just felt like the right amount of time to be able to turn back and pick it up.”

“Somehow lockdown was the key to everything”

Compiled under Martha Rafferty’s stewardship, Rest In Blue is unlike most posthumous albums you’re likely to hear. Whereas many such projects are cobbled together out of demos and outtakes, this record felt like a brand-new work, lovingly crafted, and capable of standing up against the very best Gerry Rafferty albums. By stripping recordings back to her father’s vocals, Martha was able to select the finest material from across four decades of his career, enlisting the songwriter’s musician friends – including his longstanding guitarist Hugh Burns – to record new parts.

“Somehow lockdown was the key to everything,” Martha later said. “Emotionally, I was ready.” Even the album’s artwork, by Stealers Wheel illustrator John Byrne, is consistent with Gerry Rafferty’s vision; in fact, the original painting had been purchased by the singer in the 90s and earmarked for an album cover many years earlier. Best of all, the production on Rest In Blue sounded truly exquisite and timeless, with Martha opting to service the songs in a way that ensured they wouldn’t date.

The album’s opener, Still In Denial. is a soft-rock revelation. Holding up against the best Gerry Rafferty songs , it’s an unflinchingly honest exploration of the singer’s life-long battle with alcoholism. “He wasn’t under any illusions about the fact that he was an alcoholic,” Martha said. “He sought treatment and went into detox many times.” Though not the first time Gerry wrote of his experiences, it’s remarkable hearing him recount his struggles from beyond the grave, in a song that sounds like it was recorded yesterday.

“It’s been a really emotional process”

The songs range from the irresistible acoustic-folk ballad You Are All I Want – an instant classic that proves what a great songwriter Rafferty was – to cover versions such as his rendition of British folk musician Ewan MacColl’s song Dirty Old Town (which later became a hit for The Pogues). Elsewhere, the touching piano ballad Full Moon sees Gerry Rafferty reflect on his ailing health, providing a haunting journey into the mind of a man slowly unravelling (“It’s a battle I can’t win/Like a full moon on the wane”)

With a raft of unreleased material to draw from, it’s difficult to tell which specific decade each song came from, largely thanks to the album’s crystal-clear production and the fresh input from Rafferty’s former musical collaborators. Re-entering the studio to finalise the recordings, audio engineer Andy Patterson and Dire Straits keyboardist Alan Clark did justice to the material. “For everybody who’s worked on it, it’s been a really emotional process,” Martha admitted.

Long-time fans of Gerry Rafferty were also rewarded with a new recording of the 1973 hit he wrote for Stealers Wheel, Stuck In The Middle With You. Now notorious for being featured in Quentin Tarantino’s 1992 movie, Reservoir Dogs, the Rest In Blue version sees an older Rafferty reinterpret the song that originally made him famous. “It’s really nice to hear him singing that song with a mature voice,” Martha told The Independent.

“I’ve never heard Gerry sing so well. He never fails to amaze me”

Across a remarkably consistent collection of songs, Rest In Blue is an impeccably realised and truly pleasurable reminder of what made its creator one of the all-time greats. In any other year, had this album been released while Rafferty was alive, it wouldn’t have been a surprise to see him re-enter the UK singles chart with a song such as Slow Down. Overseen by London-based producer Tambala and released as a promo single a month prior to the album’s release, it’s a breezy pop-rock gem that arguably boasts one of the catchiest choruses Rafferty has ever sung.

Rafferty aficionados are well aware of the singer’s connection to stand-up comedian Billy Connolly. The pair played together from the mid-60s onwards, as the folk duo The Humblebums, and the traditional song Wild Mountain Thyme – a version of which appears on Rest In Blue – was a song both Scots were particularly fond of. “I’ve never heard Gerry sing so well,” Billy Connolly is reported to have said, having been moved to tears upon hearing Rafferty’s latter-day recording. “He never fails to amaze me.”

By turns fresh, vivacious and touching, Rest In Blue peaked at No.73 in the UK album chart, proving that, even ten years after Gerry Rafferty’s death, many fans were eager hear more of the songwriter’s work. “Everyone who’s heard him like that realises how great he was, and I really wanted to try and capture that,” Martha said. Not only a triumphant return to form but also perhaps a tantalising glimpse of more posthumous material to come, let’s hope this is not the last we hear of Gerry Rafferty. A voice like his deserves to be heard.