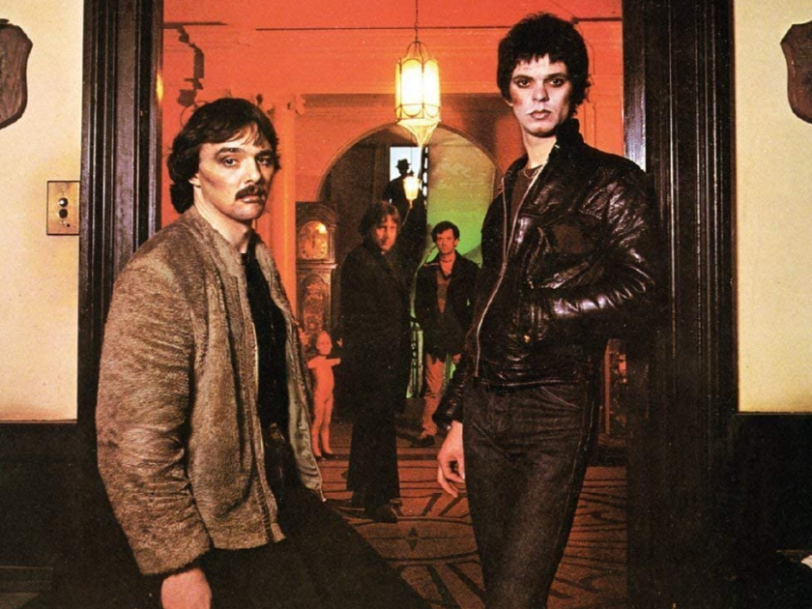 With ‘Rattus Norvegicus’, The Stranglers melded punk nihilism with pop songwriting and prog virtuosity to create something of their own.

These days, most people can predict what the average punk retrospective will tell them before they’ve even read the contents. Almost inevitably, it’ll single out Never Mind The Bollocks, Here’s The Sex Pistols, The Clash’s self-titled debut and Ramones’ Rocket To Russia as the Class Of ’77’s most necessary releases, though it might offer bouquets to boundary pushers such as Television’s Marquee Moon, Wire’s Pink Flag and Talking Heads’ Talking Heads: 77 if it’s a little more enlightened. Yet there’s another influential punk-era title which deserves equal billing, and that’s The Stranglers’ monolithic debut album, Rattus Norvegicus.

To temper that argument a little, The Stranglers’ relationship with punk has often been as fractious as the atmosphere at some of their early gigs. The Surrey quartet adopted a controversial name, and their early records had a suitably aggressive edge, but they openly flaunted their musical virtuosity and, as their median age was 28 in 1977, they were spurned by their peers for being too old. But then the band’s own attitude to punk was ambivalent at best. Channel 4’s Top Ten Punk programme once asked Stranglers bassist/vocalist Jean-Jacques Burnel about this, and he famously responded: “Were we punk? Could I give a fuck?”

One punk tenet The Stranglers could more willingly identify with, though, was the movement’s desire to celebrate the underdog. Indeed, you could argue that the band had adopted punk’s outsider-artist status long before Sex Pistols and The Clash had even set foot on a stage. Officially becoming The Stranglers during the autumn of 1974, the group initially endured a hand-to-mouth existence, falling back on vast reserves of self-belief to sustain themselves over the next two years.

“We had absurd amounts of self-confidence,” drummer Jet Black recalled in the sleevenotes for the 2018 reissue of Rattus Norvegicus. “Too much, in fact. But there was always some doubt in our minds that we could get signed, although there was no way we would admit it and there was no way we were going to give up. Historically, it was a two- or three-year period, but when you’re going through it and you’re starving and can’t pay the bills, it’s heavy.”

Born Brian John Duffy, the imposing, bearded Black was also a successful local entrepreneur who owned an off licence and a fleet of ice cream vans in the Guildford area of Surrey. He was already in his mid-30s when The Stranglers got off the ground, but if he wasn’t obvious rock-star material, then his bandmates were equally disparate.

“The Stranglers were different because they were darker and more twisted”

Prior to co-founding The Stranglers with Black, guitarist and vocalist Hugh Cornwell had spent time as a biochemistry graduate at Lund University, in Sweden. Anglo-French bassist Jean-Jacques Burnel, meanwhile, had a grounding in classical guitar, but he hadn’t considered a full-time career in music until he stopped to give one of Jet Black’s associates a lift and met his future bandmates at Black’s off licence. The last Strangler to enlist, Brighton-born keyboard whizz Dave Greenfield, came to the band through an advert in UK rock weekly Melody Maker, during the early summer of 1975.

“Their songs used to spit at you”

Friends and insiders knew the band were onto something special as early as the summer of 1975, with their first manager, Brian Crook, recalling, in Robert Endeacott’s book Peaches: A Chronicle Of The Stranglers 1974-1990, “the odd gig here and there in pubs and working men’s clubs showed that this band had a future”.

Yet, while they had a unique sound and a dedicated work ethic, breaking through required reserves of hard graft and patience. During 1976 alone, The Stranglers performed around 200 gigs and sometimes shared stages with unlikely headline artists – not least pop crooner Ricky Valance, of Tell Laura I Love Her fame, for whom they opened a show at Kettering’s Central Hall, on 22 May.

However, the band successfully established themselves on the London circuit, playing countless shows in venues such as Dingwall’s, in Camden, and Kensington’s Nashville Rooms during 1976. They also opened shows in the capital for nascent punk icons Patti Smith and Ramones, though an altercation between JJ Burnel and The Clash’s Paul Simonon, after a Ramones gig at Dingwall’s, in July 1976, confirmed what The Stranglers already knew: London’s punk elite didn’t accept them among their own.

“We were slated for not digging Iggy Pop and The Stooges,” Burnel later recalled. “And for not going down the King’s Road to [punk-friendly pub] The Roebuck and [Malcolm McLaren’s] SEX shop like the Pistols and The Clash.”

Nevertheless, more receptive ears were listening – not least astute A&R man Andrew Lauder, whose United Artists imprint had previously released titles by artists The Stranglers heartily approved of, among them Can and Dr Feelgood. After performing a private show for Lauder, the group formally signed to United Artists on 6 December 1976 – just days after Sex Pistols’ notorious, expletive-ridden interview with Bill Grundy on the Today show. Suddenly punk was hitting the headlines, and The Stranglers were perfectly placed to record their debut album.

“I wanted the record to sound dirty, aggressive and subversive”

Neither band nor label wasted time in getting down to business. In January 1977, The Stranglers entered TW Studios, a small recording complex tucked away behind a nondescript Fulham Palace Road shop front, wherein they nailed Rattus Norvegicus in little more than a week, with assistance from engineer Alan Winstanley and producer Martin Rushent. The latter was more than a little impressed – if perhaps also slightly intimidated – by the band’s presence.

“There was something sinister and evil about the band I didn’t want to hide,” Rushent recalled in Robert Endeacott’s Peaches. “Whether that was real or they were putting it on, I don’t know, but it seemed to work. Their songs used to spit at you and I wanted that to come across. I thought if it was all tarted up in echoes and flashy production techniques it would dilute the impact. I wanted the record to sound dirty, aggressive and subversive.”

Rushent duly achieved this aim, yet while Rattus Norvegicus was rarely less than edgy, it never stinted on hooks or hummable tunes. London Lady and Burnel’s provocative Ugly (“I guess I shouldn’t have strangled her to death/But I had to go to work and she had laced my coffee with acid”) tapped into the nihilism of the times while sweetening the pill with winning melodies, and the anthemic Hanging Around and wired (Get A) Grip (On Yourself) were executed with a precision and vitality way beyond most of punk’s three-chord chancers.

Elsewhere, The Stranglers further demonstrated their versatility on the album’s signature hit, the reggae-influenced, innuendo-laden Peaches, and they even had the audacity to include Princess Of The Streets, a melancholic, blues-tinged workout featuring a sorrowful Burnel vocal and an imperious Cornwell guitar solo. Having gleefully ripped up punk’s rule book, they chose to bring Rattus Norvegicus to a dynamic conclusion with Down In The Sewer: a suite-like tour de force stretching out over eight minutes, during which neither tension nor intrigue let up for a second.

While not the album’s official title track, this prog-punk epic significantly influenced the concept behind Rattus Norvegicus (the name deriving from the Latin for the common brown rat). Effectively Hugh Cornwell’s treatise on life in contemporary London, the song’s visceral lyrics (“There’s lots of rats down here/You can see the whites of their eyes”) were informed by an episode of a post-apocalyptic 1975 BBC TV drama, Survivors, in which the protagonists leave the safety of a farming community for the city, which they can only enter through a rat-infested sewer.

Released on 15 April 1977, Rattus Norvegicus then appeared with an unforgettable rear cover image of a rat silhouetted against a glorious orange sunset which had been unearthed by United Artists’ art director Paul Henry. Fittingly, the rat – a much-maligned creature in possession of an enviable survival instinct – has remained The Stranglers’ most prominent insignia ever since.

“‘Rattus Norvegicus’ was belligerent, nasty and over the top, it was just fantastic!”

Suggesting the band would indeed endure, Rattus Norvegicus quickly found favour among The Stranglers’ rapidly burgeoning fanbase, and it rose to No.4 in the UK album chart. Establishing a pattern which would soon become the norm, the album divided opinion in the media, though some of the day’s more enlightened critiques (NME: “Make no mistake, these guys are going to make records that will be played ’til they wear out”) acknowledged that this unusually determined band had every chance of outlasting the flash-in-the-pan confines of punk.

As a spate of legend-enshrining discs such as No More Heroes, Black And White and The Raven would shortly prove, that’s exactly what The Strangers did – and they continue to defy the ravages of time while enjoying the support one of rock’s most ardent fan bases. Yet, for newcomers and stalwarts alike, Rattus Norvegicus remains the logical point of entry into this singular band’s oeuvre.

“Like so many kids, I was floored by punk – the thrill of the music, the look, the attitude and the politics all made sense to my 16-year-old mind,” author and music journalist John Robb wrote in 2018. “But there was one band that really made a connection – The Stranglers. They were different because they were darker and more twisted and their music was more aggressive – and nowhere more so than on Rattus Norvegicus. It was belligerent, nasty and over the top, it was just fantastic!”

Find out which classic punk artwork made it into our best 70s album covers.