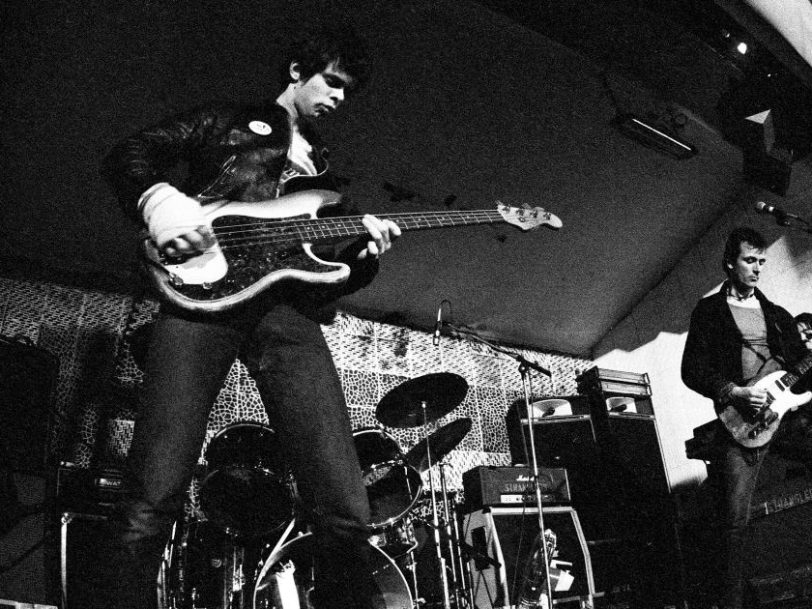 ‘Black And White’: Behind The Stranglers’ Polarising Post-Punk Classic

Arguably The Stranglers’ starkest and most compelling work, ‘Black And White’ was one of its era’s most innovative albums.

The Stranglers may have been notoriously ambivalent about punk, but they were responsible for two of the initial movement’s classic albums, Rattus Norvegicus and its fierce, provocative follow-up, No More Heroes. Yet even before 1977 had drawn its last breath, work was underway on their third album, Black And White: a stark, yet highly compelling record which proved the band had already outstripped most of their contemporaries.

Listen to ‘Black And White’ here.

“We did wanna go further technically and musically”

Isolated in a rehearsal studio called Bear Shank Lodge, near Oundle, in the middle of the Northamptonshire countryside, the group began work on Black And White as 1977 came to a close. “That Christmas 1977 in the middle of the writing sessions the others had homes to go to,” bassist/vocalist JJ Burnel recalled in an interview with Louder Than War in 2015. “I had nowhere to go so I stayed at Bear Shank Lodge… The weather was bleak. I remember a picture of us playing chess in the snow outside and it captured the bleakness very well.”

The music that emerged from these intensive writing sessions was equally dark and intense – and it reinforced the belief that The Stranglers were firmly focussed on embracing the future.

“We did wanna go a bit further technically and musically and so that was the intent,” Burnel recalled of the group’s approach to Black And White. “We had moved on a hell of a lot in a short space in time because of what was happening to us and we wanted to make a point.”

“You were either for us or against us”

Explaining the album’s title, Burnel said, “Bands like Sex Pistols and The Clash were on front covers all the time and we never got that and it got up my nose… We were outselling both those other bands so we developed a chip on our shoulders and the result was a ghetto mentality. You were either for of us or against us by then… We called it Black And White because opinion was completely polarised.”

Though it wasn’t purposefully conceived that way, Black And White was also an apt title for a record of two distinct halves. The “White” side of the original vinyl release – identifiable by its white label – broadly contained the album’s poppier tracks, among them the storming Tank, the brilliantly gnarly, reggae-tinged Nice’n’Sleazy and Toiler On The Sea, a widescreen, sci-fi epic led by Burnel’s growling bass and which was inspired by a disastrous holiday the group’s frontman, Hugh Cornwell, had recently taken in Morocco, during which the guitarist/vocalist and his girlfriend had both been struck down by chronic food poisoning.

Fittingly, the record’s “Black” side was considerably darker and markedly more experimental. In The Shadows, for example, derived from a jam during which, Burnel later recalled, the band were aiming to create “a dub version of Captain Beefheart”. Elsewhere, tracks such as Threatened, the nuclear disaster-related Enough Time and the gripping Curfew were distinctly dystopian in their outlook.

“They didn’t get where we were coming from”

Curfew, with its Cold War-inspired lyric about immigration and Russian aggression (“The men from the Steppes delivered their vacuum”) seems frighteningly prescient in the current 21st-century climate, though when Black And White was first released, Burnel’s haunting Death And Night And Blood (Yukio) – inspired by the controversial Japanese novelist and nationalist Yukio Mishima, who later committed ritual suicide – arguably attracted the most criticism.

“Unfortunately it didn’t comply with a majority of thinking in the UK at the time so people thought it was fascistic,” Burnel told Louder Than War. “They didn’t get where we were coming from. We were posing different ways of looking at stuff…

“It is a warrior song,” he continued, alluding to the lyrics “When I saw that Sparta in his eyes/Young death is good”. “If you know a bit about Mishima you would know that he did admire Spartan history… People outside the band found it uncomfortable because it didn’t resonate with them. It made them fearful but for other people it resonated with them and they liked the song.”

Indeed, following it’s release, on 12 May 1978, Black And White as a whole resonated with many of the band’s fans, including their loyal supporters in the media, one of whom, influential BBC Radio 1 DJ John Peel, was so excited by the album, he made the almost unprecedented move of broadcasting it in its entirety before it was officially released.

For the most part, the reviews were on side, too. Especially enamoured of the album’s “White” side, NME referred to the record as “by far the best work they’ve ever done”, while a suitably impressed Record Mirror said it “belies expectations of The Stranglers as a spent force”.

These enthusiastic notices also translated into sales: Black And White peaked at No.2 in the UK and equalled Rattus Norvegicus and No More Heroes by going gold after spending 18 weeks in the Top 75. It also spawned two Top 30 hits courtesy of Nice’n’Sleazy and the band’s belligerent yet beguiling reimagining of Dionne Warwick’s Burt Bacharach- and Hal David-penned Walk On By. A long-time staple of The Stranglers’ live set, the latter song also appeared on a white-vinyl 7” which was included as a freebie with the first 75,000 copies of the album.

“An awful lot of people have been influenced by The Stranglers”

Effectively placing a full stop on a remarkable 18-month burst of creativity which spawned their first three classic albums, Black And White was – and remains – one of its era’s most innovative records. However, thanks to The Stranglers’ outsider status and their often fractious relationship with certain members of the media, the album wasn’t as widely hailed as it perhaps should have been.

What goes around comes around, though, and Black And White now picks up richly deserved plaudits, with a BBC Music retrospective dubbing it both “essential” and “extraordinary”, and bracketing the record with other accepted boundary-pushing titles such as Joy Division’s Unknown Pleasures and Gang Of Four’s Entertainment!

“It’s taken a fuck of a long time for people to come out of the woodwork and be honest about this album and what it meant to them,” JJ Burnel told Louder Than War in 2015. “Peter Hook has been one of the bravest and stuck his neck out about the band. An awful lot of people have been influenced by The Stranglers, or helped along by us but they never acknowledged it. It seemed that it was too dangerous to have any association with us!… Now we are in a different period and people have started to admit to [liking] The Stranglers.”

Find out which classic punk artwork made it into our best 70s album covers.