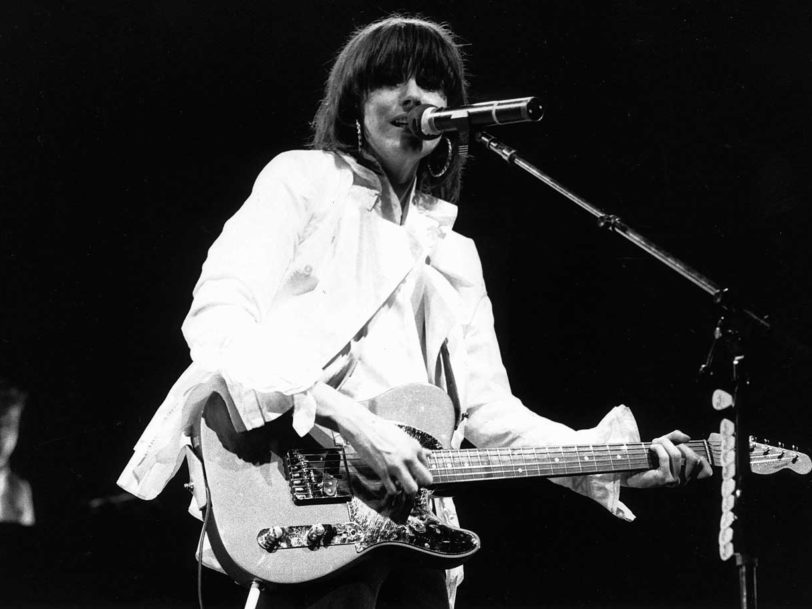 Punk ultimately failed in its quest to turn the music industry on its head, but it did begin the process of balancing rock’n’roll’s gender-equality scales. Thanks to the scene’s liberating “Year Zero” approach, charismatic female artists such as Patti Smith, Siouxsie Sioux, Blondie’s Debbie Harry and Pretenders’ Chrissie Hynde all stamped their authority on the late 70s and released records which still resonate today. Indeed, Pretenders’ sparkling, self-titled debut album remains one of the post-punk era’s most mandatory titles, and it’s to Chrissie Hynde’s eternal credit that she hustled with such vigour to make it happen.

“She didn’t take any shit from anybody”

Born in industrial Akron, Ohio, Hyde fell in love with the 60s British Invasion as a child, absorbed the minutiae of rock’n’roll history and was convinced music was all that really mattered when she emigrated to London in 1973.

Inspired by the likes of The Rolling Stones, Lou Reed and Iggy Pop, Hynde initially wrote for UK weekly NME and worked at Malcolm McLaren and Vivienne Westwood’s ever-evolving clothing emporium on London’s King’s Road (before it became known as Sex). Her true calling, however, was to form her own band.

It took a while to fall into place. Hynde led a nomadic lifestyle over the next couple of years, cutting her teeth with a series of embryonic outfits during spells in Paris and back in the US, before she again pitched up in London when punk was germinating in 1976.

“She had a tough but vulnerable sound”

Hynde was stockpiling self-written songs, but while she encouraged friends on the London scene who later ended up in influential outfits such as The Clash, The Slits and The Damned, the musical collaborators she required for her own outfit remained elusive until Motörhead frontman Lemmy recommended a drummer called Gas Wild. Said skinsman didn’t last but, before he left, he drafted in a new bassist from Hereford, Pete Farndon, who stuck around and brought fellow Hereford native, guitarist James Honeyman-Scott, into the fold.

Christened Pretenders, the fledgling group’s initial demo – featuring several Hynde originals and a cover of The Kinks’ Stop Your Sobbing – scored them a deal with Real Records, for whom Pretenders re-recorded Stop Your Sobbing as their debut single, with Nick Lowe in the producer’s chair. Having released Stiff Records’ first single, So It Goes, and overseen The Damned’s debut album, Lowe was well-respected and he was already aware of Chrissie Hynde’s burgeoning songwriting talent.

“At that time, we were all a little in love with Chrissie, because she was so cool and didn’t take any shit from anybody,” Lowe recalled in the sleevenotes for Pretenders’ 2006 box set, Pirate Radio. “She had so much style. She had a tough, but vulnerable sound that was really unusual. It reminded me of Sandie Shaw.”

Captured in a whistle-stop, three-hour session, Pretenders’ take on Stop Your Sobbing was a revelation. Starring Hynde’s sassy vocals and Honeyman-Scott’s shimmering guitars, it had an irresistible, radio-friendly allure and cracked the UK Top 40 early in 1979, taking the band onto Top Of The Pops in the process.

“The band had developed tremendously”

Pretenders still had one crucial change to make, however, with Martin Chambers replacing original drummer Gerry Mackelduff behind the kit before the group set about recording their self-titled debut album. With Nick Lowe opting out, they engaged former Roxy Music/Sex Pistols producer Chris Thomas to helm the sessions at London’s Wessex Studios, but his prior commitments on Wings’ Back To The Egg and Pete Townshend’s Empty Glass albums meant that Pretenders recorded their debut album in short studio blasts across several months.

“They went away and they did gigs, then they’d write another song,” Thomas recalled in 2008. “The writing was progressing and by the time they’d done the last tracks, the band had developed tremendously. In the end, our strange schedule actually strengthened the album.”

He wasn’t wrong. Pretenders’ self-titled debut album displayed all the hallmarks of a classic. Confident and diverse, it found Hynde’s team excelling, whether blitzing through hard-edged rockers such as Precious, Tattooed Love Boys and Mystery Achievement, the blissful pop of Kid, the yearning Lovers Of Today, or even the reggae-tinged intrigue of Private Life. Thomas’ production was sharp and the rhythm section were a powerhouse throughout, but – as Chrissie Hynde later noted – James Honeyman-Scott’s inherent melodic skills were the catalysts when it came to the band’s exhilarating blend of punky aggression and pop classicism.

“Jimmy and I turned out to have a genuine musical affinity,” Hynde said in 2008. “He hated the punk rock scene I loved because it was so limited. He loved The Beach Boys and ABBA. I encouraged the rocker in him and he encouraged the melodic side of me.”

“I never imagined it was going to be a hit”

An especially memorable Hynde/Honeyman-Scott co-write from the album gave the band their breakthrough hit, even though it initially divided opinion. Though Chrissie Hynde later said, “Brass In Pocket was a turn of phrase that never appeared in the song, but describes someone who is doing alright – I never imagined it was going to be a hit,” Chris Thomas never harboured any doubts about the song, which, released in November 1979, duly became the first UK No.1 single of 1980 and announced the band on the international stage.

“I knew Brass In Pocket was the single the first time I heard the demo,” Thomas said in 2008. “The original was a bit slow, but I heard it coming up to the tempo of an Al Green track, with that sort of swing.”

“Every move turns out to be the right one”

With Brass In Pocket burning up the charts, Pretenders’ debut album was released on 27 December 1979, and immediately hit No.1 in the UK. Vindicating Chrissie Hynde’s hard work and self-belief, the album remained at the top of the charts for four consecutive weeks and went on to make significant inroads in the US, where it landed inside the Top 10 of the Billboard 200 on its way to going platinum.

Yet, while it chimed with the times, the album has gone on to enjoy an acclaimed afterlife. Long on energy, attitude and killer tunes, it remains as alluring as ever, because – as Rolling Stone so succinctly put it – “It stands as a stunning confluence of hooks, sonic and substance – it’s one of those rare albums on which every move turns out to be the right one.”