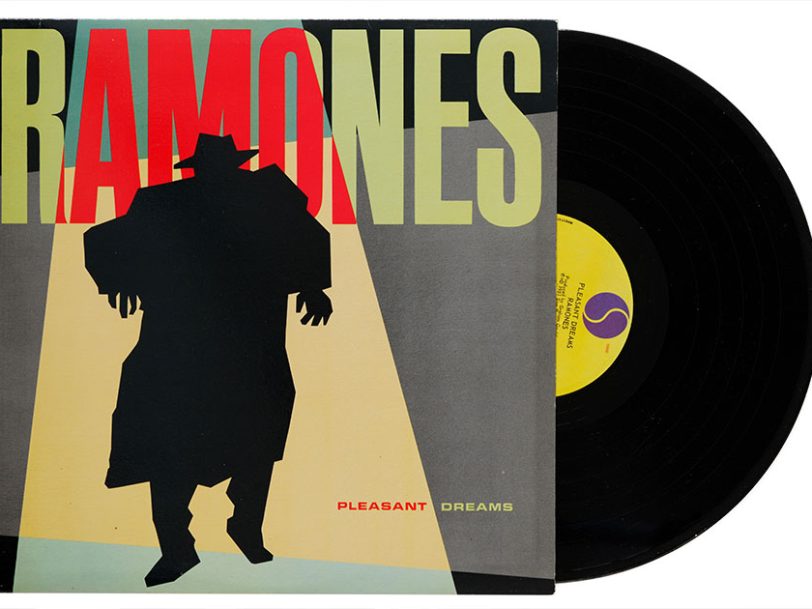 After the Phil Spector-produced ‘End Of The Century’, Ramones stripped things back for the underrated ‘Pleasant Dreams’.

Ramones’ sixth studio album, Pleasant Dreams, still cries out for some long-overdue respect. Released in the summer of 1981, in the slipstream of the big-budget, Phil Spector-helmed End Of The Century, the record emerged from an especially stressful time in the New York City quartet’s history and, after stalling at No.58 on the Billboard 200, it was unfairly branded a failure.

“It would have probably split up most bands”

“There’s a lot of strong stuff on it,” vocalist Joey Ramone recalled in Everett True’s Hey Ho Let’s Go: The Story Of The Ramones, while also conceding that the album was recorded during “a real rocky time” for the group. “It would probably have split up most bands,” Joey continued. “Me and John had almost no communication whatsoever. You can’t run an organisation or a band or a government like that.”

The lack of communication was due to the almost irreparable rift between Joey and Johnny Ramone, which sprang from the guitarist beginning a relationship with Joey’s former girlfriend, Linda Daniele. Johnny later married Linda, but their relationship put the bandmates’ friendship under a strain from which it never properly recovered.

To add to their woes, Ramones were still expected to produce the goods in the charts. Though End Of The Century was their best-performing album, it only peaked at No.44 in the US (it would hit No.14 in the UK), and Sire again insisted the group work with a name producer for their next record. Ramones wanted to team up with rising Siouxsie And The Banshees/U2 producer Steve Lillywhite, but Sire rejected that suggestion, instead insisting that 10cc’s Graham Gouldman take the helm for Pleasant Dreams.

Ramones certainly respected Gouldman’s track record as a songwriter. Indeed, the renowned Mancunian had penned such huge 60s hits as Bus Stop, No Milk Today and For Your Love for British Invasion bands the group adored – The Hollies, Herman’s Hermits and The Yardbirds. And during the Pleasant Dreams sessions, at New York’s Mediasound Studios, Gouldman also came up with ideas for vocal harmonies and guitar overdubs, and taught the band to use the bass as a melodic – rather than purely rhythmic – instrument. Yet while their new producer greatly enjoyed the sessions (“They were fastidious, they were conscientious and I had a great time,” Gouldman told Bullz-Eye in a 2007 interview), his quest to help Ramones craft killer radio-friendly pop songs only caused further schisms within the band.

“Working with Graham was easy, in that he was always a gentleman, but I knew going in that Pleasant Dreams wasn’t going to be the type of album I wanted,” Johnny Ramone later recalled. “It really could have used another two or three punk songs. All I wanted to do was keep our fans happy and not sell out. I was fighting within the band. They were trying to go lighter, looking for ways to be more commercial. I was against the band doing that.”

Elsewhere, though, Gouldman’s input was more than welcomed. In his book, Punk Rock Blitzkrieg: My Life As A Ramone, Marky Ramone recalled the Pleasant Dreams sessions with genuine relish.

“It sounded radio ready, even if radio wasn’t willing”

“I loved the sound, and I loved a lot of the songs,” the drummer wrote. “It’s Not My Place (In The 9 To 5 World) sounded radio ready, even if radio wasn’t willing. I loved the Bo Diddley feel of the drums and the change to a straight beat in the break, which gave it the sound of an early Kinks or Who song. Motown and [Phil Spector] Wall Of Sound imprints were all over Don’t Go, You Sound Like You’re Sick and She’s A Sensation.”

Indeed, decades later, Pleasant Dreams has survived as one of Ramones’ most enduring albums. Despite the internal strife and external pressure, the band were able to park the dysfunction outside the studio door and realise some truly sparkling music – with great songs coming from the pens of both Dee Dee and Joey Ramone.

In general, Dee Dee was responsible for the harder-edged material, such as You Sound Like You’re Sick and the ennui-stricken Sitting In My Room, though the bassist also supplied the flavourful bubblegum pop of Come On Now and the driving, rockabilly-esque All’s Quiet On The Eastern Front. Joey, meanwhile, supplied several tracks which can go toe-to-toe with the best Ramones songs, including She’s A Sensation, the fist-pumping The KKK Took My Baby Away and the glorious, girl-group-inspired 7-11, in which the song’s protagonist meets the girl of his dreams in a convenience store – only for it to go horribly wrong during the journey home, when his car goes fatally out of control (“It crushed my baby and it crushed my soul”).

“It was Ramones during their punk-pop era”

With hindsight, Ramones made their craft sound effortless on Pleasant Dreams, with the record’s lead single, We Want The Airwaves, offering the only hint they were less than happy with their lot. Arguably the album’s punchiest rocker, this hard-edged, Joey-penned diatribe at the parlous state of contemporary pop radio (“Where’s your guts and your will to survive?/Don’t you wanna keep rock’n’roll music alive?”) featured a direct quote from The Doors’ When The Music’s Over (“We want the world and we want it now”). It also showed that Ramones were only too aware that their love of classic 60s pop music may have made them an anachronism during an era in which synthesisers and 12” disco mixes were steadily on the rise.

Sadly, Pleasant Dreams’ average sales reflected that thinking on its initial release, on 20 July 1981, but its music has outlived the times. These days, the album cries out for rediscovery.

“It was the Ramones during their punk-pop era, and I like pop-rock a lot,” Marky Ramone told Everett True. “Catchy tunes, things with a lot of minor chords. End Of The Century should have sounded like that.”

Find out which ‘Pleasant Dreams’ tracks make the cut in our best Ramones songs.