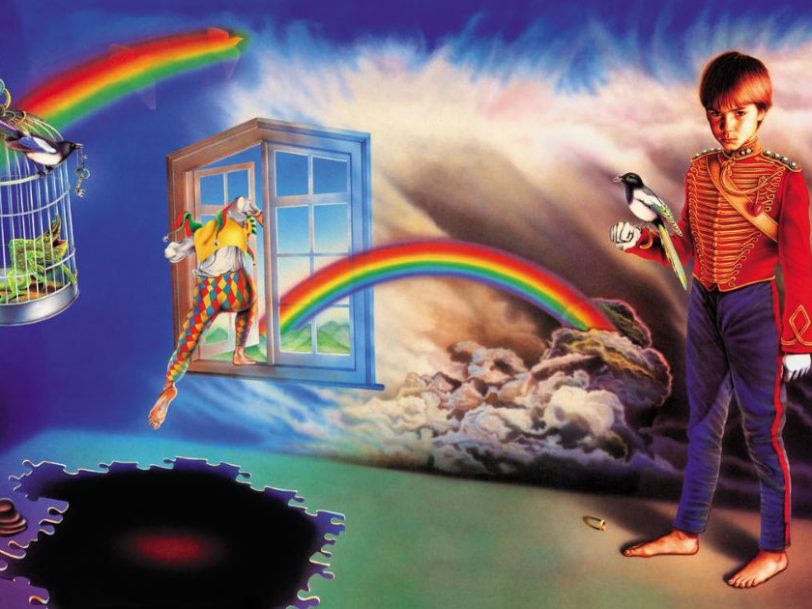 ‘Misplaced Childhood’: Behind The Album That Saw Marillion Come Of Age

Long considered to be a captivating and kaleidoscopic masterpiece, Marillion’s third album, Misplaced Childhood, was a towering achievement that turned the band into the biggest prog-rock act of the 80s. Entrancing listeners with a tale of lost love and a disillusioned soul bathing in the fading glow of childhood memories, it saw singer-songwriter Fish pair his delirious stream-of-consciousness lyricism with Steve Rothery’s spellbinding guitar riffs to produce the group’s most vivid and evocative work to date.

After cooking up the concept behind Misplaced Childhood during a ten-hour acid trip, Fish and the rest of the band relocated to Hansa Tonstudio, in West Berlin, in late 1984, to record the album with Rolling Stones producer Chris Kimsey. Though the sessions were undeniably productive, it’s a miracle the group made it out alive, with Fish’s wayward antics leading him on one occasion to strip off his clothes in Hitler’s favourite restaurant, and to throw bricks over the Berlin Wall in the hope of setting off landmines. Little did he realise that the resulting album would be just as explosive.

“The Wogan show lit the touchpaper on the whole thing”

Described by Fish as “a way of saying sorry” to an old flame called Kay, the album’s incendiary lead single, Kayleigh, was released in April 1985, a mesmerising hit-in-waiting full of Mark Kelly’s sizzling 80s synths and Steve Rothery’s blazing guitar arpeggios. After performing the song on Terry Wogan’s BBC One talk show, Wogan, in May 1985, Kayleigh set fire to the charts and asserted itself as one of the best Marillion songs. “The Wogan show was what did it,” Fish later said. “That lit the touchpaper on the whole thing.”

Following the Wogan performance, Fish broke into a smile that prompted Malcolm Hill, former Head Of Promotions at EMI, to declare that the singer had just “broke every mother’s heart in Great Britain”. Peaking at No.2 in the UK, and denting the US charts, Kayleigh instantly became one of 1985’s biggest hits, sending public interest into fever pitch over the impending release of its parent album.

Released on 17 June 1985, Misplaced Childhood went to No.1 in the UK and sold 100,000 copies in just one month. From its LSD-inspired opener, Pseudo Silk Kimono, to the strutting call-to-arms of White Feather, the album was a rousing prog-rock opus that meditated on the ruination of juvenile innocence and the pitfalls of adulthood. As Fish muses about ill-fated romance on the nearly eight-minute-long Bitter Suite, or recounts his alcohol-sodden adolescence on Waterhole (Expresso Bongo), there’s little doubt that Misplaced Childhood found Marillion’s neo-prog ambition reaching its peak.

“The subject matter was personal yet everyone could relate to it”

Keen to keep their commercial momentum going, Marillion released Lavender as the album’s second single, in August 1985. Starting out as a lilting piano ballad inspired by Joni Mitchell’s experimental masterpiece The Hissing Of Summer Lawns, it soon blossoms into a soft-rock torch song with roots in the 19th-century nursery rhyme Lavender’s Blue. Entering the UK chart at No.5, Lavender grew out of the childhood themes dreamt up by Fish, who explores “the little boy’s dream” of walking through the park and bumping “into the lady of your dreams that you’re going to fall instantaneously in love with”.

Given its hallucinogenic origins, Lavender was a perfectly-formed psychedelic pop single that meshed naturally with the album’s all-encompassing prog-rock scope, sandwiched as it was between the blissful balladeering of Kayleigh and the swirling synth majesty of Bitter Suite. With Misplaced Childhood best seen as one long composition, its second half ventures beyond the lavender fields and into the uncharted terrain of adult life.

Having already hinted that he was growing tired of life on the road, Fish expresses his cynicism with the touring treadmill on the delightfully busy-fingered rocker Lords Of The Backstage. Immediately thereafter, the melancholic nine-minute odyssey of Blind Curve sees the singer reflect on the death of a friend in a car accident, set to one of Steve Rothery’s greatest guitar solos. However, by the album’s penultimate song, Childhood’s End?, his tone turns to optimism as he realises his “misplaced childhood” is alive and well, finally ready to be rejuvenated in the wind on White Feather. By that point, of course, Marillion themselves have taken flight.

“It was obvious that the band had gone up in musicianship”

The final single to be released from Misplaced Childhood was Heart Of Lothian, a song that saw Fish reflect upon his Scottish upbringing with a tribute to the city of Edinburgh. Though not as commercially successful as their previous hits, it still peaked at No.29 in the UK following its release, in November 1985, thanks to Fish’s poetic descriptions of “wide boys” on the Royal Mile and tower blocks looming like “stalagmites of culture shock”. With all the force of a literary giant, Heart Of Lothian stomped its way into everyone’s affections.

Part of what made Misplaced Childhood so era-defining was its artwork, created by Marillion’s long-time collaborator Mark Wilkinson, who had also designed the covers for their previous albums, Script For A Jester’s Tear and Fugazi. “It was obvious to everyone that the band had gone up a fair few notches in musicianship,” Wilkinson said. “The subject matter was at once personal yet everyone could relate to parts of it because we all remember our childhood.” Having asked the son of Wilkinson’s next-door neighbour to pose for the cover, which pictures the boy in a red military jacket and surrounded by storm clouds, the band then had him star in the promo video for Kayleigh, making him forever synonymous with the album’s success.

By the end of 1985 – a year which also saw them play Live Aid – Marillion had become one of the world’s biggest rock groups, successfully revitalising the prog-rock genre by embracing synths and a radio-friendly pop nous. Eventually selling over 815,000 copies, Misplaced Childhood is by far and away one of the best Marillion albums, and the band’s greatest achievement during their imperial phase. A stupendous work of child-like wonder, it has grown into a prog-rock classic that truly belongs in the annals of British rock history.

Find our which ‘Misplaced Childhood’ tracks made our list of the best Marillion songs.