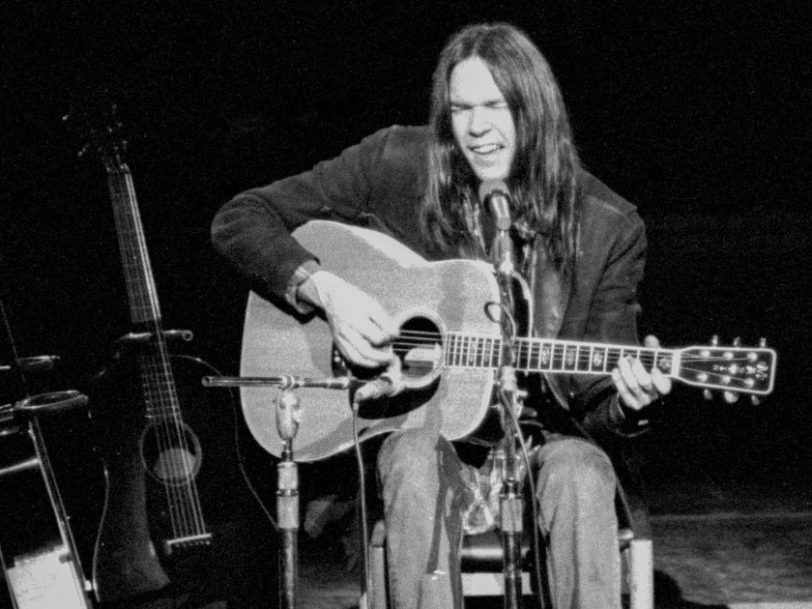 Neil Young’s historic concerts at Toronto’s Massey Hall, two sets performed on 19 January 1971, marked a special homecoming for the 25-year-old singer. Young, born in that Canadian city in 1945, was nearing the end of a four-month solo tour called Journey Through The Past, and these live recordings, released over three decades later as Live At Massey Hall 1971, capture the former Buffalo Springfield and Crosby, Stills, Nash And Young musician in his full glory as a one-man band.

Playing solo was a necessity for Young at the time. The singer-songwriter, who had polio as a child, had recently slipped a disc in his back while working in his garden and had temporarily stopped wearing his heavy Les Paul guitar in favour of a lighter acoustic guitar. Young alludes to the injury at the beginning of his rendition of Helpless, when he drops a pick and says “bending over is… not so much fun”. He later admitted: “I couldn’t hold my guitar up. That’s why I sat down on my whole solo tour. I couldn’t move around too well.”

“This is the album that should have come out”

Young was riding high after the release of the brilliant After The Gold Rush album in September 1970, and he and his trusted producer David Briggs decided to record the performances at Massey Hall – a late show was added because the first sold out so quickly – because they recognised that the venue had such superb acoustics. Back in May 1953, the Toronto concert hall had famously been the place where Charlie Parker and Dizzy Gillespie recorded their celebrated evening of bebop jazz.

Though Young’s album was recorded on that winter night in 1971 – with Briggs mixing live in the hall and capturing a spectacularly intimate, natural-sounding performance – the recordings remained in the archives for decades, despite a plea from Briggs to make them the follow-up to After The Gold Rush. The concert circulated as a bootleg among fans for years before Young released Live At Massey Hall 1971 officially on 13 March 2007. When the concert came out, Young admitted the original decision had been a mistake, explaining, “This is the album that should have come out between After The Gold Rush and Harvest… David Briggs, my producer, was adamant that this should be the record, but I was very excited about the takes we got on Harvest, and wanted Harvest out. David disagreed. As I listen to this today, I can see why.”

Young used the show to debut some then unreleased material, explaining: “I’m gonna sing mostly new songs tonight… I’ve written so many new ones that I can’t think of anything else to do with them other than sing ’em.” Among the songs he unveiled at Massey Hall was Old Man, which he introduced with an explanation that the song was about a ranch he had bought that came with a foreman, about whom the song was written. “Yeah, I live on a ranch now… lucky me,” he said, sounding oddly apologetic for his success.

Range and sophistication, and a rapturous reception

Young’s personal life had been in turmoil leading up to the concert, following his legal separation from his first wife, Susan Acevedo. His emotions poured out on Bad Fog Of Loneliness, a song on which he sings, “So long, woman, I am gone/So much pain to go through.”

The 17 songs on Live At Massey Hall 1971 reflect the range and sophistication of Young’s repertoire at the time, and many of them still sit among the best Neil Young songs of all. He delivers stunning versions of Ohio and The Needle And The Damage Done. Other highlights, performed with a heartfelt intensity, included Tell Me Why, Cowgirl In The Sand, Don’t Let It Bring You Down and Down By The River, plus the then unreleased See The Sky About To Rain, which Young would later record for the landmark On The Beach album.

Young’s acoustic guitar playing was deft and precise throughout his two Massey Hall shows, and he also showed off his impressive piano playing on tracks such as Journey Through The Past and Love In Mind, a song he tells the audience he wrote in Detroit. Part of what makes any live album special is the atmosphere of the crowd, and Young receives a rapturous reception from his home fans, particularly when he returns for a final encore of I Am A Child.

When Live At Massey Hall 1971 was finally released, it reached No.1 in Canada and was a chart hit in the US and the UK. The show is superb, capturing a youthful Young at his very best.

Check out our best Neil Young songs to find out which Massey Hall studio originals make the cut.