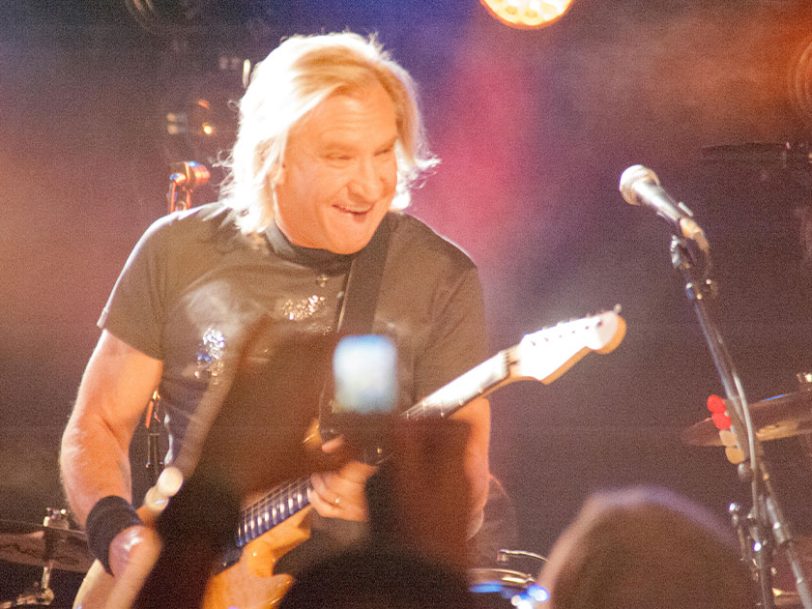 While on a short break from Eagles, guitarist Joe Walsh took flight by lampooning rock stardom on the satirical song Life’s Been Good.

As a member of the soft-rock group Eagles, Joe Walsh was flying higher than ever following the success of the band’s 1977 album, Hotel California. Making the most of a lull between Eagles records, Walsh headed to Bayshore Recording Studios, in Coconut Grove, Florida, with producer Bill Szymczyk to lay down some ideas for a solo record. Having reached the summits of rock stardom, Walsh cast a dim view on the merits of venerating rock’n’roll musicians such as himself, funnelling his cynical sense of humour into his best-known solo song, Life’s Been Good. Here is the story of how that happened…

Listen to the best of Eagles here.

Released as a single in May 1978, Life’s Been Good had first appeared on the soundtrack to the dramady movie FM, and quickly gained radio play due to its irreverent takedown of headline-grabbing rock’n’roll tropes. As an eight-minute-long classic-rock jam, the song contained all the lyrical wit and musical prodigiousness expected from Walsh, kicking off with a loping guitar riff that sucks listeners into a vortex of bliss from its very first note.

By reminding listeners of how the time-consuming obligations of touring with a successful rock band essentially turn musicians into nomads, Life’s Been Good is a savage acknowledgement of being careful what you wish for. “I do have a really nice house,” Walsh admitted to the BBC, “but I’m on the road so much that when I come home from a tour, it’s really hard to feel that I even live here.”

“I started believing I was who everybody thought I was, which was a crazy rock star”

“I live in hotels, tear out the walls,” Walsh sings on Life’s Been Good. “I have accountants pay for it all.” When he later reflected on the typical rock’n’roll tabloid stories of trashing hotel rooms and throwing televisions out of windows, Walsh accepted that there was some truth to them. The experience he often refers to was when he was touring with his pre-Eagles band The James Gang in support of The Who, and the infamously wild-spirited drummer Keith Moon took a shine to the singer. “During those days he taught me a lot about the finer arts of anarchy, chaos, damage, destruction,” Walsh said of the hijinks he got up to with Moon.

Naturally, Life’s Been Good is sung from the perspective of a hardened rock’n’roller who has seen and done it all. “I started believing I was who everybody thought I was, which was a crazy rock star,” Walsh told Rolling Stone in 2017. “It took me away from my craft. Me and a lot of the guys I ran with, we were party monsters. It was a real challenge just to stay alive.” In Life’s Been Good, Walsh sings of being crazy but having a good time (“I’m just looking for clues at the scene of the crime”), before wryly admitting that “life’s been good to me… so far”.

With fame comes money, and Walsh doesn’t shy away from singing of being rich enough to own a sports car, even though this might well be short-lived. “My Maserati does one-eighty-five,” he sings. “I lost my licence, now I don’t drive.” In its place, he pays to be driven around in a limo, to protect him from the screaming fans trying to tear him limb from limb. Like the very best satire, there’s a touch of exaggeration here – Walsh never owned a Maserati, but he did lose his driving licence, and was prohibited from getting behind the wheel. Nevertheless, Life’s Been Good gleefully exposes the flip side of the rock’n’roll lifestyle: a world that can grant its denizens great riches, but also rob them of the satisfaction of enjoying them.

Upon its release in 1978, Life’s Been Good became Joe Walsh’s biggest solo hit, peaking at No.12 on the US Billboard Hot 100 and momentarily allowing him to step out of Eagles’ shadow. Though he was still a member of the group at the time of its release, the song’s runaway success captured the public’s imagination, puncturing the balloon of hubris that can surround rock stardom. However, during a show at Los Angeles’ Troubadour Bar in 2012, Walsh admitted that Life’s Been Good had become a bit of an albatross. “Most questions I ever get asked are about Life’s Been Good,” he told the audience. “And I’m tired of them.” Funnily enough, his feelings reflect sentiments expressed in the song: “I can’t complain, but sometimes I still do.”

“It is a strange lifestyle,” Walsh told the BBC. “I’ve been around the world in concerts, and people say, ‘What was Japan like?’, but I don’t know. It’s got a nice airport, you know.” Whether Walsh ever managed to venture deeper into the country is anyone’s guess, but that doesn’t change the fact that Life’s Been Good is one of most intelligent satires on the life of a rock star ever written. With Walsh still spending a large part of his time on the road, the song stands as a reminder of an era when guitar gods reigned supreme. Even today, Life’s Been Good is constantly played on classic-rock radio, and it was even added to Eagles’ setlists in the late 90s, when Walsh reunited with the group.

There’s a simple reason why Life’s Been Good has endured. Not only does it boast some incredible musicianship courtesy of its genre-hopping dynamics and a rip-roaring guitar solo from Walsh, but few songs dissect the foibles of rock-star antics as wittily as Walsh does in its lyrics (“It’s tough to handle this fortune and fame/Everybody’s so different, I haven’t changed/They say I’m lazy but it takes all my time/I keep on goin’, guess I’ll never know why”). It’s hard to imagine why anyone in his position would have complaints about being successful, but Walsh makes a hilariously strong case for it. Yet while there are a lot of things to complain about in this world, this song is not one of them.