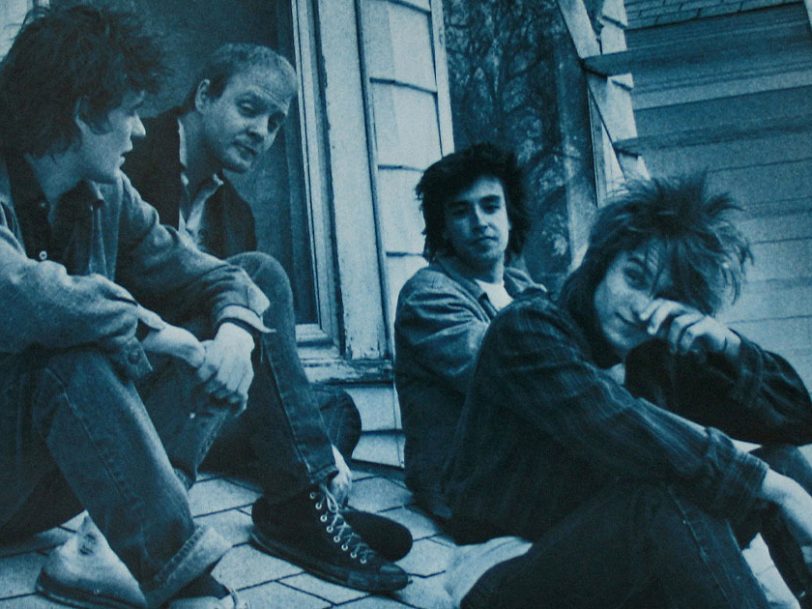 ‘Let It Be’: How The Replacements Made Their Masterpiece Album

The Replacements’ third album, ‘Let It Be’, was a ‘dumb-smart’ leap for a band that legions of listeners would soon take to their hearts.

Picture the scene: it’s spring 1984, and The Replacements have just finished recording their third album, soon to be released as Let It Be. The Minneapolis punk upstarts may have already earned a reputation for extraordinary feats of self-sabotage, but there’s a feeling among the camp that, with this album, they’ve made a breakthrough. Frontman Paul Westerberg’s songs are stronger than ever, and the recordings have captured the crackling intensity and spontaneity of the group’s live shows. Now all they need is a name for their as-yet-untitled work.

Listen to ‘Let It Be’ here[Linkfire].

On the way to a gig, the band hit upon an idea. “We were riding around… kicking around silly [album] names, and we thought, The next song that comes on the radio, we’ll name it after that,” Westerberg told Bob Mehr for his 2016 book, Trouble Boys: The True Story Of The Replacements. When the unmistakable opening chords of The Beatles’ Let It Be started up, their decision was made. The group “peed our pants” with laugher, remembered Westerberg. “And Peter [Jesperson, manager] is at the wheel, silent as hell, thinking, They’re not going to do this. We did it pretty much to piss him off and pretty much to show the world, in a Ramones kind of way, how dumb-smart we were… Just to see how many feathers we can ruffle.”

Feathers had been flying in The Replacements’ wake since Westerberg joined forces with brothers Bob and Tommy Stinson (on guitar and bass, respectively) and drummer Chris Mars towards the end of 1979. The group’s early material, captured on their debut album, Sorry Ma, Forgot To Take Out The Trash, may have been performed at breakneck speed with barrels of attitude, but there were signs that Westerberg’s songs had a melodic sensibility and a distinct lyrical voice that was lacking in the work of most of their peers. Their second album, Hootenanny, was a stylistic grab bag that confirmed their maverick status while featuring a couple of early Westerberg classics – Color Me Impressed and Within Your Reach – with a brooding vulnerability and emotional heft that looked beyond the group’s punk roots.

Released in 1983, Hootenanny helped the band distance themselves from the US hardcore scene and led to nationwide tours. Tommy Stinson was just 16 at the time and dropped out of school to hit the road. But despite the presence of a minor, chaos followed the hard-drinking, confrontational band wherever they went. In July they opened for the fast-rising R.E.M. on a tour of the Midwest and East Coast. The Replacements saw this as an opportunity for more hell-raising, which the majority of R.E.M. were happy to join in with. Things came to a head when Tommy left the band after a show in Cincinnati. The evening had descended into mayhem when Paul Westerberg and Bob Stinson poured beer into R.E.M.’s on-stage monitors before their set. Manager Jesperson persuaded Tommy to rejoin the band, after which the young bassist adopted an “If you can’t beat ’em” attitude, as he told Bob Mehr: “What ended up happening after that is I went to the other side: I started drinking. That’s where the turn happened.”

Despite the booze-fuelled shenanigans, Westerberg had written his best material to date, and The Replacements entered Blackberry Way Studios, in Minneapolis, on 27 August 1983, where they were joined by R.E.M. guitarist Peter Buck for the first week of recording what would become Let It Be.

Buck made this presence felt on Let It Be’s opening track, I Will Dare, a song that Westerberg had written back in February, just missing the deadline for Hootenanny. When Bob Stinson was struggling with a solo for the song, Buck stepped in with a clean, chiming guitar part that worked first time. The R.E.M. guitarist also lent Westerberg his mandolin for the recording. The result was the most effective opening track of The Replacements’ career, a hopped-up encapsulation of the rush of teen romance that also served as a band manifesto, as Westerberg told Mehr: “Part of it has to do with the band: we’ll dare to flop, we’ll dare to do anything. I Will Dare was a good slogan for a Replacements single. On the other hand, it was a kind of love song: ‘Ditch the creep and I’ll meet you later. I don’t care, I will dare.’”

“We decided it was cooler to put on the ‘uncool’ song”

The next track on the album, Favorite Thing, maintains the momentum with a souped-up rockabilly guitar part that jump-starts a song that seems to be on the verge of falling apart throughout. Its bratty energy is somehow trumped by the following number, We’re Coming Out, a full-throttle punk throwback to The Replacements’ early days that revels in the band’s reputation as troublemakers. Next up, Tommy Gets His Tonsils Out is a bombastic rocker that is every bit as lyrically ridiculous as its title suggests.

The sublime Androgynous follows, an ahead-of-its-time LGBTQ+ song composed by Westerberg on his parents’ piano. He’d been flirting with wearing glammy make-up for some time, partly to rile up less enlightened souls and partly in the spirit of self-discovery. When a girl told him he was androgynous, he looked the word up. Then he wrote the song. Over simple piano lines Westerberg delivers an increasingly wracked, impassioned vocal with lyrics that speak of acceptance and love. The Replacements had come a very long way in a few short years.

They had also recorded covers of some classic 70s songs – T. Rex’s 20th Century Boy, The DeFranco Family’s Heartbeat – It’s A Lovebeat, The Grass Roots’ Temptation Eyes and KISS’ Black Diamond. That “dumb-smart” thinking won out again, and the group elected to put the KISS cover on Let It Be. “We decided it was cooler to put on the ‘uncool’ song,” Jesperson told Mehr. Still, they made it work as a ferocious palette-cleanser ahead of another Westerberg classic. Unsatisfied was barely written when the band recorded it – Westerberg improvised sections of the lyric and Bob Stinson hadn’t even heard the song before playing on it – but that only adds to the palpable feeling of angst and yearning. “It’s about as melancholy as we want to get,” Westerberg later said, “and [still] be alive.”

“People always come up and say, ‘You wrote this just for me’”

The near instrumental Seen Your Video saw Westerberg take aim at bands making videos for MTV, something he deemed “false and silly”. “Seen your video/It’s phony rock’n’roll” he howls. It was a stance he’d manage to keep up for a few more years. The throwaway rocker Gary’s Got A Boner made for more puerile thrills before the shimmering beauty of Sixteen Blue, for which Westerberg channelled the ennui of his then 16-year-old bandmate, Tommy, to again prove himself as a songwriter capable of genuine empathy. Answering Machine ends the album on a passionate note. Westerberg had recently embarked on a long-distance relationship, and his frustration with the technology involved inspired some bleak rhetorical questions: “How do you say, ‘I miss you,’ to an answering machine?/How do you say, ‘Good night,’ to an answering machine?/How do you say, ‘I’m lonely,’ to an answering machine?”

Released on 2 October 1984, Let It Be was a critical smash hit that quickly outsold its predecessors, leading to a buzz that would see The Replacements sign to a major label. It also went on to have a huge impact on future generations of musicians – Frank Black of Pixies, Jeff Tweedy of Wilco, and Nirvana’s Kurt Cobain have all cited The Replacements as a pivotal influence. And Let It Be has resonated through the years. Somewhere right now a teenager is hearing Sixteen Blue, Unsatisfied or Androgynous for the first time and is adopting it as their song – something Paul Westerberg is only too aware of. “People always come up and say, ‘You wrote this just for me,’” he later reflected. “And I Say, ‘Yeah, I did. I don’t know you, but I knew you were out there.’”

Buy The Replacements vinyl at the Dig! store.