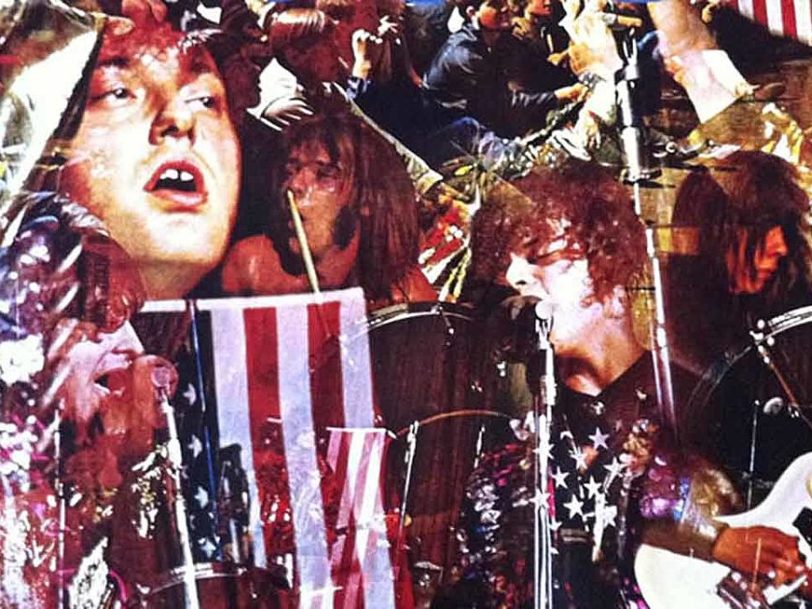 Kick Out The Jams: How MC5 Booted The Door Down For Punk

Recorded live and loud, ‘Kick Out The Jams’ was an incendiary debut album that stuck it to the man and paved the way for punk rock.

Influential, leftist-leaning US proto-punks, Detroit’s MC5 (short for “Motor City Five”) may have been out of step with the peace-and-love hippie ideal prevalent throughout the late 60s, but their abiding philosophy (“rock and roll, dope and fucking in the streets”) chimed with the zeitgeist in 1968. Their incendiary debut album, Kick Out The Jams, provided the perfect soundtrack to a turbulent 12-month spell during which the Vietnam War intensified and riots broke out in Paris and London’s Grosvenor Square.

Listen to Kick Out The Jams here.

“You couldn’t have a more accurate representation of the band”

Unusually for a debut album, Kick Out The Jams was a live recording, compiled from two adrenalised MC5 shows recorded at Detroit’s Grande Ballroom on Halloween, 1968, rather than sterile studio sessions. Yet the band’s motives were pragmatic as well as philosophical. After a couple of years of non-stop gigging, the stage was their natural domain.

“We didn’t think it was at all strange that we were going to record Kick Out The Jams live,” MC5 manager, poet and political activist John Sinclair recalled in a 2007 interview with Uncut. “It was bold to do a live album as a first album, but that was our aesthetic. We were a band who put on a show when nobody put on a show, except The Who. You couldn’t have a more accurate representation of how the band sounded.”

“It was so intense; we knew we had something!”

Initially founded by guitarists Wayne Kramer and Fred “Sonic” Smith in 1964, MC5’s classic line-up had coalesced by 1965 with the arrival of vocalist Rob Tyner, bassist Michael Davis and drummer Dennis Thompson. They initially released a couple of cult-level singles, including a cover of Them’s I Can Only Give You Everything, but right from the start it was the group’s high-energy live shows which built their reputation.

Remarkably, that legendary run of dates led to Rolling Stone granting MC5 a cover story while they were still unsigned, but that situation quickly changed after Elektra Records’ A&R man Danny Fields visited Detroit and came away having signed both MC5 and their local sparring partners, The Stooges. Suitably impressed, Fields, Elektra CEO Jac Holzman and producer Bruce Botnick all recognised MC5 were at their best when playing for a receptive audience, so gave the green light for the band to record two shows at Detroit’s Grande Ballroom to make up Kick Out The Jams.

“I wanna hear some revolution out there!”

PopMatters reviewer Adam Williams later declared that “no live recording has captured the primal elements of rock more than the MC5’s inaugural effort” and it’s true that Kick Out The Jams remains a seismic statement of intent, five decades after its initial release. Rob Tyner whipped the crowd up with an evangelical zeal worthy of Billy Graham (“Brothers and sisters, I wanna hear some revolution out there!”), while the record’s first half found the band tearing through proto-punk classics including Ramblin’ Rose, Rocket Reducer No.62 (Rama Lama Fa Fa Fa) and the intense Come Together.

The second half took MC5’s more leftfield influences on board. Tyner praised the role of the far-left Black Panther Party in the Detroit riots of 1967 during a gripping cover of John Lee Hooker’s Motor City Is Burning, while the wigged-out Starship reflected the band’s love of free-jazz exponents such as Sun Ra and Albert Ayler.

The album’s most enduring song, however, was its blazing title track. But while the phrase “kick out the jams” has since been widely adopted in reference to the breaking down of restrictions, MC5 initially deployed the term to heckle fellow-groups’ performances.

“The song came out of band speak,” Wayne Kramer told Uncut in 2007. “Tyner heard the expression and it fitted in with this idea of total commitment, total assault on the culture. So we used the expression to harass other bands we played with. If they were losers, we’d stand by the stage and holler, ‘Kick out the jams or get off the stage.’ Tyner crafted that into a tune.”

“We’d been waiting for that moment”

The buzz building around the band initially translated into sales when Kick Out The Jams, which was released in February 1969, moved over 100,000 copies and flew into the Billboard 200, where it peaked at No.30 during a 23-week stay. However, controversy also dogged the release due to the title track’s rallying cry of “Kick out the jams, motherfuckers!” Elektra toned this down (changing it to the less inflammatory “Kick out the jams, brothers and sisters”) when the song was released for radio play, but the US chain store Hudson’s refused to stock the album due to the alleged obscenity.

After further wrangles, Hudson’s pulled all Elektra titles from their stores, and the label dropped MC5. The group soon bounced back, however, signing to Atlantic for a further crack at the charts with 1970’s, Jon Landau-produced Back In The USA, and they already knew they’d made an enduring debut, regardless of the slings and arrows.

“It was so intense, like we’d been waiting for that moment to get recorded,” drummer Dennis Thompson recalled in 2007. “I remember thinking this is what I dropped out of college for. I think I broke ten sticks each performance at least, and I had calluses on all of my fingers. I remember both nights were kick ass. It was magical because we knew we had something!”

Kick those jams out even harder with our best MC5 songs.