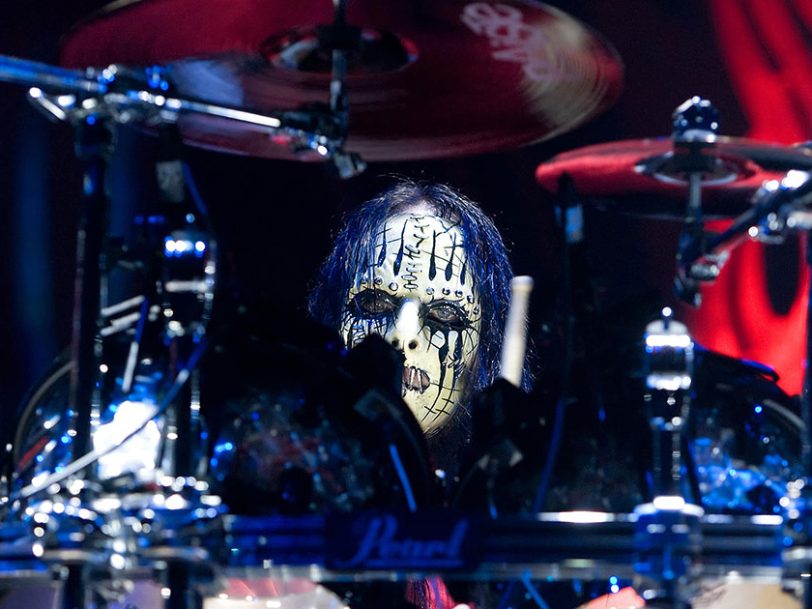 Co-founder of one of the most ferocious bands the world has ever seen, Slipknot drummer Joey Jordison left behind an incalculable legacy.

For Slipknot drummer Joey Jordison, music wasn’t just a creative outlet or the way he made a living. Nor was it a passing phase in adolescence he would eventually grow out of. It was something he discovered in his most formative years – and it would soon dominate his life. Music became as vital to him as his beating heart and the blood flowing through his veins. It was his life.

“I latched onto music at a young age and it was all I cared about,” Jordison once recalled to Metal Hammer magazine. “I was a daydreamer, thinking about these larger-than-life possibilities that could happen if I worked hard.” Jordison had an unmistakable energy even as a toddler. His mother, Jackie, would regularly find the youngster bashing away at makeshift drum kits assembled haphazardly from saucepans with wooden spoons for drumsticks. “He’d just sit on the floor and bang on pots and pans,” she told Rolling Stone. “I thought he had a heck of a beat for a little, tiny kid.”

Listen to the best of Slipknot here.

Before I forget: childhood and early years

Jordison’s parents invested in his first proper drum kit when he was eight years old. It was a moment he later described as an “epiphany”. “From that point on,” he said, “my life changed.” But the road to making music his profession was far from easy. For starters, Jordison hated school from the outset and, being an introvert, found it hard to make friends. So he threw himself into music as way to get through the days, and was rarely seen without his headphones attached to his ears. He learned guitar as well as the drums, and formed his first bands before he even reached high school. But then he had to grow up fast.

Joey’s parents divorced and his father moved out of the family home. The aspiring musician’s life changed very quickly. As he recalled in the book Slipknot: Inside The Sickness, Behind The Masks, “All of a sudden, I had to be the man of the house, in a weird way. I was helping my mom with my sisters all the time. It turned me into a more mature person at a really young age.” It also tightened his relationship with his mother, for whom he found a new respect for after seeing her run the family home on her own.

None of the setbacks ever derailed Jordison from his desired path in life. In fact, having lost all interest in “normal life” when his father left, they only fuelled his dream to become a musician. And one band who couldn’t exist much further away from the real world is the one whose roots were laid down in Des Moines, Iowa, in 1993 by a drumming Jordison, bassist Paul Gray and a local welder turned percussionist named Shawn Crahan: Slipknot.

The fledgling rhythm section would practice in Crahan’s basement for six hours a day, six days a week, with potential bandmates coming and going until Slipknot’s line-up was finalised in 1995. They were joined by guitarists Jim Root and Mick Thompson, Craig Jones on samples, DJ Sid Wilson and second percussionist Chris Fehn. The last member to sign up was frontman Corey Taylor. Though the nine members of Slipknot had very different personalities there was one thread that connected them all: anger. Or, as Jordison summarised to Rolling Stone, “I’m in this band because of everything that I hate about everything in the world.” It was a feeling that eventually resonated with millions of fans around the globe.

Corey Taylor might be Slipknot’s frontman in the traditional sense of the word, but the group had two other focal points. Crahan was the mastermind behind their vision, while Jordison was very much integral to the band’s visual aesthetic. He designed the group’s logo and their costumes, and coined the term “maggots” for their ever-growing (and fiercely dedicated) fan base. It was Crahan and Jordison who spent the latter’s graveyard shifts at the gas station mapping out their journey from the humdrum of Des Moines to world domination.

“Every band was out there watching us. And we’re out for blood”

As word on the street began to build around Slipknot in 1998, Monte Connor, head of A&R at Roadrunner Records, cottoned on to the buzz. When he attended a showcase gig at McCormick Auditorium, situated on the site of the Illinois Institute Of Technology, in Chicago, it was Jordison whose hyper-enthusiastic energy stood out most. As the industry veteran told Metal Hammer, “Joey pulled me aside as soon as I got backstage. All he wanted to talk about was metal. Not business but just metal. Joey’s encyclopaedic knowledge of underground metal as well as the history of Roadrunner Records just blew me away… His long-term vision was that he wanted Slipknot to be the biggest metal band on the planet.” Jordison’s relentless passion was enough to convince Connor they just might pull it off.

Though Slipknot’s ascendancy was far from immediate, it was rapid once they joined the touring Ozzfest as it made its way across the US in the summer of 1999. Despite being sidelined to the second stage, where they were given a difficult slot in the punishing mid-afternoon heat, the nonet destroyed the festival day after day. It was a spectacle that Kerrang!’s Paul Brannigan described as “exhilarating and terrifying in equal measure; a violent, cathartic explosion of hate, venom and rage that left the audience awed and electrified”. As Jordison recalled to Metal Hammer, “Every time we played, everybody – every fucking band, Black Sabbath included – was out there watching us. And we’re out for blood, we fucking hate everybody, just ‘Fuck you!’ That’s always been the Slipknot mentality.” Within a decade, thanks to albums such as Iowa and Vol.3 (The Subliminal Verses), Jordison’s wish came to fruition.

“I can spin upside down on a drum riser, but… I have no sense of normal reality”

Despite the anonymity of Slipknot’s trademark masks – the drummer’s, incidentally, was inspired by the horror movie Friday The 13th and an incident in which his mother “scared the fucking shit” out of him wearing a similar hockey mask to the one worn by the psychopathic Jason Voorhees – Jordison soon became one of the most recognisable metal musicians in the business. But he never lost his fanboy enthusiasm for music, nor his passion for playing it.

When he wasn’t laying the world to waste with his day job, Jordison could be found as guitarist in Murderdolls, whose frontman has told a story about the time Jordison freaked out when meeting his favourite band, Metallica, for the first time. The thrash legends came knocking on his door again a few years later, asking him to fill in for an AWOL Lars Ulrich at Download Festival. As Jordison described it, “I sat down in their little warm-up room, and we played some songs that we didn’t get to play onstage and just jammed. I mean, the show was cool, but that was fucking waaaaay cooler, because it was just us. Getting to play with Metallica? Come on, it was amazing, man. It’s one of my most treasured memories.”

In fact, outside of Slipknot, Jordison seemed to become a go-to stand in, and both industrial metal legends Ministry and nu-metal heroes Korn called on his services. “It’s the only thing I know how to do well,” Jordison said of his incessant schedule. “I can spin upside down on a drum riser in front of 20,000 people with Slipknot, but I can’t go to the mailbox and figure out my mail. I have no sense of normal reality at all.”

Left behind: illness, departure from Slipknot

Eventually, though, things began to unravel after Slipknot scored their first US No.1 album with All Hope Is Gone, in 2008. To outsiders, and with the pin stuck in all their various side projects, the band seemed to be at its most united in years. But, with nine very volatile personalities to accommodate, the relationship began to fracture. Bassist Paul Gray succumbed to an accidental drug overdose in 2010. Slipknot vowed to continue in his honour and completed a world tour through 2011 and 2012. However, it was around this time that Jordison’s own health nosedived, with the drummer needing to be carried to the stage on several occasions. With the tour finally over, he returned home all but entirely paralysed.

Jordison was diagnosed with a rare condition that attacks the spinal cord called transverse myelitis. It would change his life forever. “It’s like having your legs cut off, basically,” he explained. In a move that nobody saw coming, Slipknot broke the news that they and the drummer were parting ways. The first Jordison heard of it was by email. He told Metal Hammer, “No band meeting? None. Anything from management? No, nothing. All I got was a stupid fucking email saying that I was out of the band that I busted my ass my whole life to fucking create, you know?

“I’ve been through so many things with those guys and I love them very much,” he maintained. “What’s hurtful is that the way it went down was not fucking right. I didn’t deserve that shit.” Not that Jordison was about to wallow in the situation; he still had music burning through his veins. In 2013 the drummer returned with the group Scar The Martyr, formed with Jed Simon from Strapping Young Lad, Darkest Hour guitarist Kris Norris and Nine Inch Nails keyboard player Chris Vrenna. They lasted three years before Jordison announced his next band, Vimic. And, in 2016, Sinsaenum emerged, with the drummer playing alongside Attila Csihar, of black metal legends Mayhem, and bassist Frédéric Leclercq, of power metallers Dragonforce.

For several years, Jordison flew low under the radar with no updates on his health. Not that it was of great cause for concern; it was thought that Sinsaenum were working on their third album, and that Murderdolls were writing new material, too. But in 2021, news broke that Jordison had passed away in his sleep on 26 July. He was 46 years old. Soon after, Slipknot paid tribute to their former bandmate and brother:

“Our hearts go out to Joey’s family and loved ones at this time of tremendous loss. Joey Jordison’s art, talent and spirit could not be contained or be held back. Joey’s impact on Slipknot, on our lives, and on the music that he loved, is incalculable. Without him there would be no us. We mourn his loss with the entire Slipknot family. We love you, Joey.”

Joey Jordison lived and breathed music. He was a driving force behind one of the most powerful and ferocious bands mainstream music has ever seen. He holds a place among the best drummers that ever lived. And his influence on the metal scene will remain palpable for generations to come.