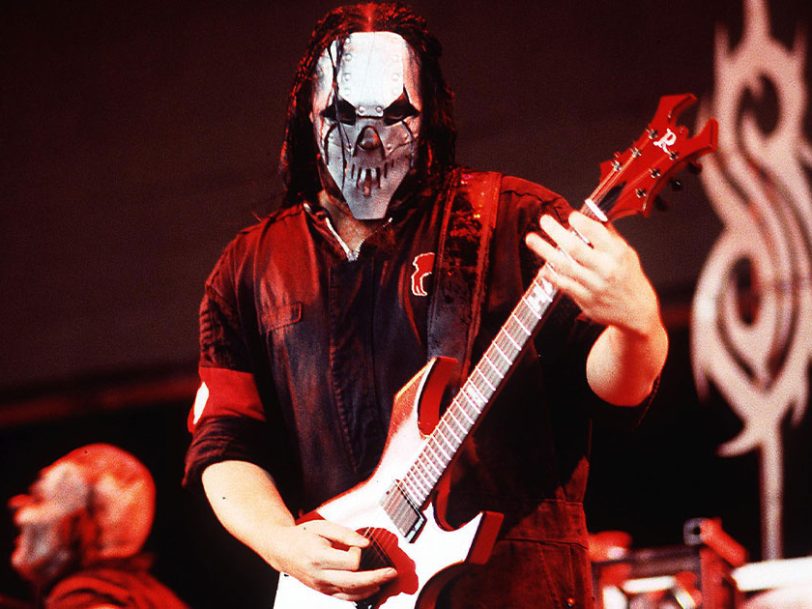 The sound of a band tearing themselves apart, ‘Iowa’ not only consolidated the success of Slipknot’s debut, it almost marked their demise.

You’d be forgiven for thinking the success of Slipknot’s self-titled debut album proper might have mellowed the Iowan nonet. But no. Instead of offering a fast track out of their much-maligned home state, they’d earned themselves a first-class ticket to self-destruction. Named for the place that birthed them, the group’s second album, Iowa, reveals all about the band’s collective headspace during a crucial period both for the group and for the bandmates as individuals.

“We were falling apart when we did that record”

Recorded at Los Angeles’ infamous Sound City Studios in January 2001, Iowa’s opening track, (515), reflects DJ Sid Wilson’s reaction to his grandfather’s death. Though he tried to return to Des Moines to see him one last time, Wilson missed his opportunity to say goodbye. Returning to the studio, his trauma was captured on tape for the world to hear, with just one word cutting through the repeated shrieks: “Death”. Raw and authentic, (515) was producer Ross Robinson’s favourite part of the album. Percussionist Shawn “Clown” Crahan told Revolver magazine in 2011, “It was Sid having a breakdown from all the pain in this thing called Slipknot.” The emotions that fuelled the Slipknot fire were almost about to destroy them.

“We were falling apart when we did that record,” frontman Corey Taylor recalled to Loudwire in 2008. “I was a fucking mess, man. I was drinking a lot. I was in a relationship that wasn’t good for me and I didn’t want to realise it at the time. We went out to LA and I really started getting into booze and philandering. I was doing anything I could to feel good because everything felt really bad. I was eating a lot, gaining weight. I wasn’t feeling anything but misery.” And he wasn’t the only band member prone to overindulgence.

“I’m pretty secretive and I was good at hiding my drug addictions,” guitarist Jim Root admitted to Loudwire. “But when we were making Iowa I was up for days on end partying and then I had a breakdown.” Percussionist Chris Fehn told Revolver, “We had all worked really hard before, but now we’re partying harder and we got a little bit of pocket change and we can afford certain drugs that we couldn’t before. It got weird and I didn’t think we were going to be able to hold it together.” Exacerbating the situation, not all band members were on the same page.

“It was a backlash for our dream”

“I was disgusted by those of us that got sucked into that world of sex and drugs,” guitarist Mick Thompson told Revolver. “I wasn’t hanging out in the dressing room and chasing skirt every night. Sorry. Not my thing. I just avoided people.” The internal struggles were compounded by a meddling music industry who wanted to milk the Slipknot cash cow for all they could.

“It was a backlash for our dream,” Crahan said to Metal Hammer in 2021. “We spent 18 months on that first cycle doing all these suggestions of what people wanted and feeling a little… puppetish. We’re Slipknot. We conjure this dream, and the dream was based around playing live with our culture. It had nothing to do with videos or making albums, interviews, agents, managers… it was all performance.” Fractured relationships between band members, and increasing pressure from record labels and management to play the corporate game and make an album full of Spit It Outs and Wait And Bleeds, all fed into a pressure cooker of anger and frustration that was reaching boiling point. Fortunately, some members of Slipknot had an entirely different Iowa experience.

“That’s where we got into a war”

The majority of the Iowa songwriting was handled by bassist Paul Gray and drummer Joey Jordison – a process they threw themselves into when their debut album cycle came to an end. And yet it was the relentless nature of the Slipknot juggernaut that carried the pair into the darkest time of their band’s existence. Without a break and utterly exhausted, Jordison admitted to Drum! in 2008, “That’s where we got into a war.” Nevertheless, they channelled all their anger and frustration into making what many still consider to be the nonet’s magnum opus. Fuck the demands of the industry machine, Slipknot were doing it their way.

Beyond Wilson’s anguished cries on (515), Iowa erupts in the avalanche of savage blast beats that is People = Shit. And that was Slipknot’s statement of intent. They weren’t about to lean into a more commercially viable sound to capitalise on the success of their debut. Here was a band who weren’t fucking around. But that doesn’t mean their songwriting wasn’t more cohesive and polished. From the pounding Disasterpiece, it’s clear that samples, loops and additional percussion were more tightly woven into the fabric of the Slipknot sound, rather than adding chaos for chaos’ sake. Vocalist Corey Taylor, too, showcased some clean singing among the vitriol of My Plague, but without sacrificing the malevolence at the beating heart of the band. And the methods Taylor adopted to achieve peak wrath were unconventional.

“We almost all died”

As Taylor described to Loudwire, “I don’t remember the particulars, I just remember a lot of darkness and anger. I was cutting myself while I was recording and bleeding everywhere. Then I would get sick and throw up. I just wanted to feel something…” It culminated in Iowa’s closing song, the 15-minute brooding monolith of its title track. It’s a change of pace for Slipknot, but one that wouldn’t sound out of place soundtracking a Wes Craven nightmare. And, ending Iowa the same way they started, this time it’s Taylor’s anguished cries emanating from the vocal booth.

Released on 28 August 2001, Iowa cemented Slipknot’s reputation as the most hateful, brutally exhilarating and greatest band to happen in metal for a generation. And it’s probably the heaviest and gnarliest album ever to sit atop the UK charts, as it did for one week in September. But it’s an achievement Slipknot hold bittersweet memories of. “I hate the album, but it is brutality at its finest,” Crahan explained to Loudwire. “People come up to me and say, ‘Do another Iowa.’ And I’m like [extends middle finger], ‘Sit on this! You know why? We almost all died.’ That’s how fucking fun it was! We almost all died.”