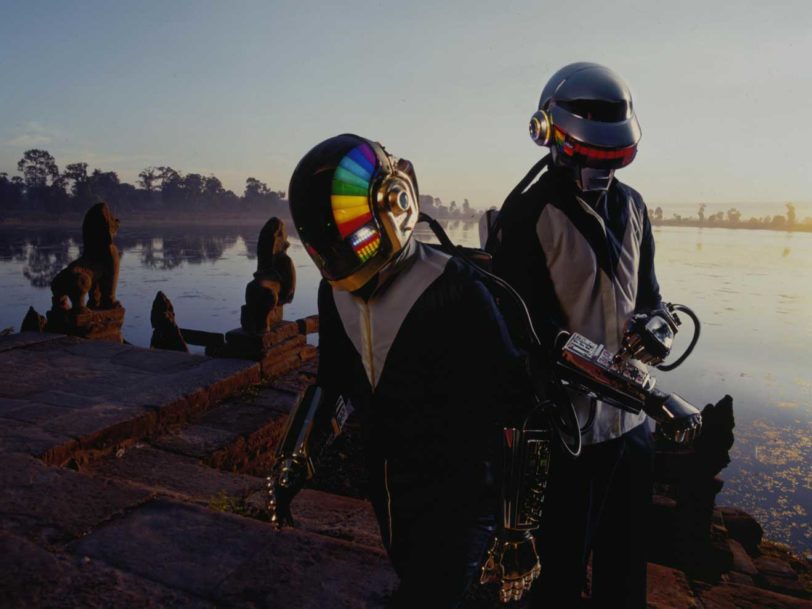 French dance music mavericks Daft Punk came up with a chanting and enchanting, shimmeringly vocoded electro-house track in Harder Better Faster Stronger. Released on 13 October 2001, it was the fourth single from the duo’s disco-influenced smash second studio album, Discovery, following the anthemic One More Time. the sleek Aerodynamic and the Balearic romance of Digital Love. Perhaps against initial expectations, it also turned out to have the fullest life of all of them, and still stands as one of the best Daft Punk songs of all time.

Spinning fragments of the past into new gold

The pop-song-length Harder Better Faster Stronger has a theme of unstoppable technological progress and productivity – sort of a more explicit and pneumatic take on Around The World, the standout single from Daft Punk’s debut album, 1996’s Homework. This obsession with humans’ love/hate relationship with technology (not to mention with perfect exhortations to dance) was later further expanded upon on Thomas Bangalter and Guy-Manuel De Homem-Christo’s more abrasive third studio set, 2005’s Human After All.

The musical chassis of Harder Better Faster Stronger itself, though, is based on a sped-up sample of funky bass, synth and four-four ride cymbal from Edwin Birdsong’s 1979 Philadelphia International number Cola Bottle Baby (“Do it faster/Makes us stronger”, as the duo had it). This is topped off with some punchily edited, pitch-riding vocoder which, similar to other tracks on Discovery, is eventually twisted into a pseudo-guitar solo. It was as if the pair were saying of sampling, “Take it/Reuse it/Do it/Forever,” proving, in the process, how an assembly line of beautiful fragments of the past could be spun into new gold. This approach was such a draw for the duo that they continued even “After/Work is/Over” – but then, “Work is never over” in Daft Punk’s world.

The colourful Japanese anime video for the single appropriately featured humanoids being processed on a conveyor belt and then turned into a humanoid band. It later became part of Discovery’s animated sci-fi companion movie, Interstella 5555: The 5tory Of The 5ecret 5tar 5ystem. Quite apart from the chiming thematic content, the clip was a perfect retro-futuristic complement to Daft Punk’s melding of 70s disco and 80s electro into a concoction fit for the 21st century.

An exercise in self-actualisation

Hip-hop maestros The Neptunes and house legends DJ Sneak and Pete Heller delivered remixes for the single, alongside hip-hop group Slum Village’s almost unrecognisable take on Aerodynamic. The Neptunes smoothed things out, with Pharrell Williams adding some conscious soulful vocals in the Curtis Mayfield-influenced style he was then developing, whereas Chicagoan Daft Punk collaborator Sneak’s version stripped things back and made it thump.

Presumably at least partly inspired by his buddies from The Neptunes, Kanye West later gave Harder Better Faster Stronger a dramatic rehash, in the shape of the Timbaland collaboration Stronger. A multi-platinum single from West’s third studio album, Graduation, it found him breaking away from more traditional hip-hop sounds into uncharted territory. He relocated Harder Better Faster Stronger lyrically, too, expanding upon the sample to turn it into an exercise in self-actualisation, drawn from Nietzsche and cut and shut into a bit of old-fashioned girl-chasing. Canadian EDM DJ A-Trak delivered a jittering remix of West’s track, and hip-hop go-to director Hype Williams helmed the video, which again had an anime theme, with West himself now on the futuristic operating table. The rapper performed his version with the approving French duo themselves at the 2008 Grammys, Daft Punk twisting the vocals into acidic flickers close to the style of some of their unreleased mixes of the original record as they happily consigned themselves to the sampling production line.

In the wake of West’s cover, Daft Punk resurrected Harder Better Faster Stronger themselves for a “big room”-styled live single from their Alive 2007 collection, whose crowdsourced video footage was evocatively edited together by fellow Frenchman Olivier Gondry, whose brother, Michel, had directed the classic Around The World clip (appropriately, that track also wove its way through the new version of Harder Better Faster Stronger). Diplo and Deadmau5 also put out their own twists on the tune, with Diplo taking it in the direction of a slamming Baltimore club track and Deadmau5 beefing up the electro bass ride. In fact, Harder Better Faster Stronger inspired all manner of unofficial mixes and viral videos, with the Daft Hands clip racking up a huge number of views thanks to its deft interpretation of the song’s riddling cascade of lyrics.

The West episode crowned Daft Punk in the US, paving the way for the stratospheric success of their final album, the altogether smoother-sounding Random Access Memories, and of their hit 2016 collaboration with R&B star The Weeknd, I Feel It Coming. While musically dissimilar, Random Access Memories’ Get Lucky notably closed the Harder Better Faster Stronger circle by featuring Pharrell Williams alongside Chic mastermind Nile Rodgers, a towering figure in the duo’s worship of 70s disco, on a song whose style wasn’t a million miles from that of The Neptunes’ Harder Better Faster Stronger remix. Luck had nothing to do with it, however, as Daft Punk had deftly tied together the history of electronic music, making everything harder, better, faster and stronger.

Check out our best Daft Punk songs to find out where Harder Better Faster Stronger ranks.