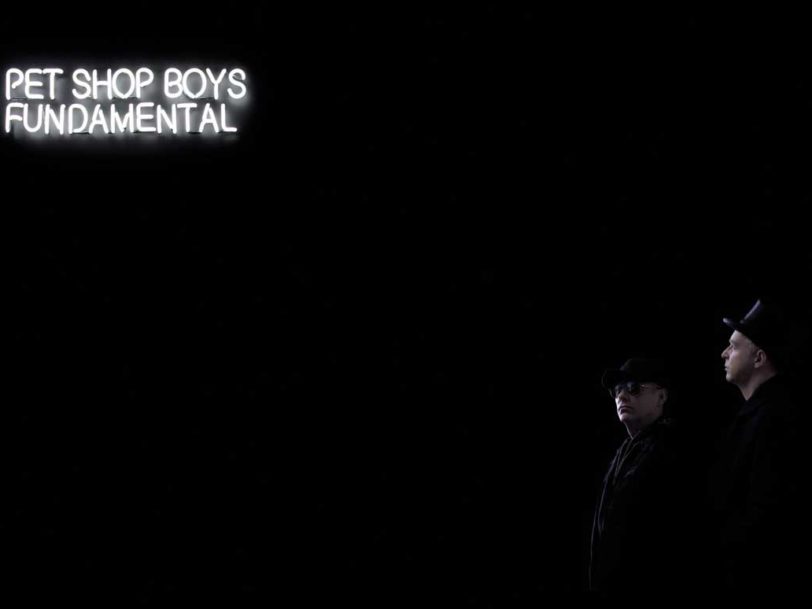 Described by Neil Tennant as “the most extreme example of us going from one extreme to another”, ‘Fundamental’ was impossible to pigeonhole.

Best laid plans and all that… Neil Tennant had been clear enough in the manifesto he sent to the duo’s manager as work started on what was to be the ninth Pet Shop Boys studio album, Fundamental: “The next album could be our first purely electronic album… very electro-pop… dirty fat synths… no pianos,” he wrote. “We actually said ‘no orchestra’,” recalled Chris Lowe.

What emerged, on 22 May 2006, was anything but that early vision. However, drenched instead in lush orchestration, Fundamental actually delivered a far grander, sweeping statement.

“It was a fruitful time”

Fundamental’s genesis dates back to Pet Shop Boys’ 2003 compilation, Pop Art, where a track submitted by American hitmaker Diane Warren, Numb, had been produced by Trevor Horn, working with Pet Shop Boys for the first time since 1989. That track stayed in the vault for the time being but became the catalyst for Horn being invited to work on further songs at the start of the Fundamental sessions. Initially hired just for the bigger numbers like The Sodom And Gomorrah Show, Horn ended up overseeing all 12 of the album’s songs.

Routinely billed as Pet Shop Boys’ most political album, there’s no missing the mannered observation threading its way through the set, with first single I’m With Stupid clearly satirising the controversial relationship between then Prime Minister Tony Blair and the US President George Bush. An obvious choice for single release, with its video featuring Little Britain stars Matt Lucas and David Walliams, it sailed into the UK Top 10 – as was still routine for the band then – despite BBC bosses putting their foot down on the pair’s plan to perform the song on Top Of The Pops alongside dancers in satirical masks.

Other political moments include the terrific ballad Indefinite Leave To Remain, which emerged during writing sessions in the Italian city of Naples. “It’s a classic Pet Shop Boys bit of a tearjerker. It’s very sincere,” says Neil, whose Sri Lankan friend’s asylum status partly inspired the song. Another track starting life in Naples was that OTT The Sodom And Gomorrah Show, which raised eyebrows when it was suggested as a good first single. Horn’s layered production reshaped the cut, originally conceived as a more straightforward Patrick Cowley disco homage (and nothing to do with sex or religion), into something more flamboyantly ornate.

The earworm that is Minimal was picked as Fundamental’s second single, and is one of the duo’s most accomplished pop-dance recordings of the 21st Century – in complete contrast to Numb, that ballad recorded a couple of years earlier and chosen as the album’s third single. A sweeping composition originally turned down by veteran rockers Aerosmith, Minimal seemed to fit the political context of much of the rest of Fundamental, which largely reflected on the turbulence of world politics post-9/11. Numb nicely complements the album’s other stately atmospheric moment, Luna Park: a meandering melody with a lyric that’s almost psychedelic in tone. Its playful phrasing would have made a worthy fourth single had radio programmers been more accommodating at this stage of the band’s career (attention instead turned to the duo’s Robbie Williams collaboration, She’s Madonna, released on Williams’ Rudebox album).

The catchy Casanova In Hell, again dating back to 2003, wears its theatrical colours with confidence – a sign of the band’s increasing ease with the medium (their musical, Closer To Heaven, had enjoyed a solid West End run in 2001). Twentieth Century is named and shamed as Chris Lowe’s least favourite track on the album, but is a midtempo electro-folk shuffler that Horn championed during sessions. Closer Integral is wave-your-hands-in-the-air classic Pet Shop Boys, which became the promotional single to launch Disco 4 the following year.

With the similar dance phrasing of Psychological opening Fundamental, here lies tracklist symmetry that neatly signals the band’s range during this period – the wonderful creative push-and-pull between accomplished melodic balladry and majestic dance sensibility, with a lively lyrical intelligence underpinning the lot. Fundamental’s diverse range of singles illustrates this well, but also made the band harder to pigeonhole in an increasingly formulaic music market.

The decision to regroup with Trevor Horn piqued interest in the album, and Fundamental gained critical acclaim without perhaps comprehensively seizing the commercial upper hand. “Overall, it was a fruitful time,” says Neil. “It’s the most extreme example of us going from one extreme to another.” A classic Pet Shop Boys statement for the boldest production from the band yet.

Earning two Grammy nominations in 2007, Fundamental is the sound of a band in two places at once but enjoying the contrast and increasingly determined to keep things ever more nomadic.