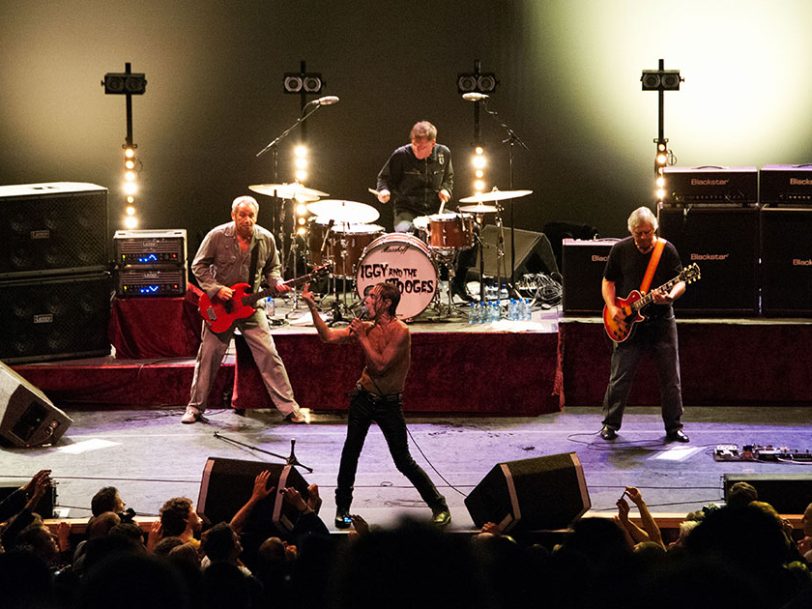 ‘Fun House’: How The Stooges Built A Proto-Punk Classic

Loud, dirty and smeared with attitude, The Stooges’ ‘Fun House’ album turned off contemporary critics, but its influence on rock is immense.

The Stooges’ storied second album, Fun House, didn’t even dent the charts on release in the summer of 1970, yet its influence on rock’n’roll history is immense. Long since accepted as an underground classic, it’s now widely considered integral to the development of punk music, while grunge and its subsequent alt-rock lineage also owe the record a pretty hefty debt of gratitude.

“The Stooges were the truest rock band… the ultimate model”

“It was when I sat alone and listened to the album Fun House that I really got it. It was a profound experience,” former Black Flag/Rollins Band frontman and devoted Stooges fan Henry Rollins told Rolling Stone in 2020.

“That would have been July 1981 in the tape deck in the Black Flag van,” Rollins continued. “To say that ‘I got it’ would be an understatement. I understood that The Stooges were the best and truest rock band that I had ever heard and that I was never going to do anything nearly as good as that album… In the context of what I was doing with music, The Stooges were the ultimate model. You couldn’t be like them but you could aspire to that purity and lack of restraint.”

Rollins’ comments are typical of the glowing testaments Fun House now receives, but they’re thrown into sharp relief when you consider that The Stooges could barely get arrested on the cusp of the 70s, despite the excesses of their hedonistic lifestyle. Their label boss, Jac Holzman, saw far greater commercial potential in the group’s Detroit neighbours, MC5, and only signed The Stooges to Elektra because he implicitly trusted his A&R man Danny Fields. Certainly, the company weren’t overly surprised when The Stooges’ self-titled debut album stalled outside the Top 100 on the Billboard album chart in 1969.

Yet, to his credit, Holzman was committed enough to give The Stooges another shot – and this time the band were far more focused on what they wanted to achieve.

“[Drummer] Scott Asheton and myself were both very keen to do something much more aggressive than our first record, which was more laidback in certain ways,” frontman Iggy Pop told iggyandthestooges.com in 2020. “I’m not sure what Ron [Asheton, guitarist] thought about that, but he definitely enjoyed what we were doing on this new record.

“As the concept progressed, I felt that the kind of music we were doing needed to expand and explode as the record moved forward,” the singer added. “That’s why we brought in Steve Mackay to help blow us over the top with his psychedelic sax.”

John Cale, the former Velvet Underground savant, had helmed the sessions for The Stooges’ self-titled debut album in New York City, but for Fun House, Jac Holzman encouraged the band to switch coasts. This time, they flew out to Los Angeles, where they spent two weeks recording the album at Elektra Sound Recorders in May 1970. Instead of Cale, Don Gallucci, former keyboardist with The Kingsmen, of Louie Louie fame, manned the console, and his flexible approach made a huge difference to how Fun House turned out.

Initially, Gallucci tried to go down the tried and tested route of recording the album with the band wearing headphones and playing their parts while separated from each other by soundproof baffles, to avoid sonic spillage. However, after a frustrating first day during which little progress was made, Gallucci agreed to remove the separators and set The Stooges up to play like they would in concert. He encouraged Iggy – fast becoming one of the best frontmen in rock – to sing (and shriek) through a handheld mic, while the guitar and bass amps were placed side by side. Inevitably, this led to the instruments bleeding together, and it produced the raw, dirty sound The Stooges were desperate to capture.

“The whole thing just took off like a Ferrari,” Iggy Pop recalled in 2020. “We would devote an entire day to gaining a great recording of each song. In other words, the first day we did Loose, then the next day Down On The Street, and so on. We later switched these two numbers in the sequence. Everything else was exactly as we’d been playing them live. It was our entire set at the time.”

In the same interview on iggyandthestooges.com, Pop also revealed that guitarist Ron Asheton’s methodology was crucial to the way Fun House turned out.

“In a way the key to the whole sonic beauty of the album was the fact that Ron played with a heavy gauge set of guitar strings,” he recalled. “He did this, he told me, because he was originally a bassist and the heavier string was just more comfortable, but it also gave his style a kind of massive ambience.”

“It didn’t sound insane enough. So we freaked out again”

In retrospect, the way Fun House’s tracklist was sequenced has also remained integral to its longevity. The Stooges frontloaded the more accessible tracks – with the heavy, prowling groove of Down On The Street followed by the lascivious rockers Loose and TV Eye – but they made a virtue of letting it all hang out from thereon in. Built around Dave Alexander’s spidery basslines and Scott Asheton’s metronomic pounding, the blasted, bluesy Dirt provides a little breathing space midway through but, after this brief respite, the band really go for the burn, deconstructing Bo Diddley on the maniacal 1970 and slamming their way through Fun House’s pulsating title track. They finally go down with all guns blazing during the free jazz-style pile-up of LA Blues.

“Something about this record that I like is the way it begins with a couple of very short, fully structured numbers, and then slips further and further out of control,” Iggy Pop enthused in 2020.

“The number where we really went to town with the studio possibilities is LA Blues,” he reflected. “Live, we used to just call this number ‘The Freak Out’. And what we played on the basic track was a very true rendition, but it didn’t sound insane enough. So we freaked out again, while listening to what we had just freaked. It was pretty amazing that everybody was so closely invested in what they had been playing on the basic take that that we were able to follow it smoothly and ferociously again.”

“No contest, the greatest rock’n’roll album of all time”,

The Stooges were thrilled by the primal power they’d unleashed on Fun House but, by and large, the critics of the day were less impressed. A switched-on Rolling Stone declared it to be “so exquisitely horrible and down and out” that The Stooges were “the ultimate psychedelic rock band in 1970”, but the album missed the charts and initially remained little more than a curio.

It didn’t help that The Stooges weren’t around to promote it. They were still together when Fun House hit the racks on 7 July 1970, but their classic line-up fell apart after a chaotic, drunken performance at the Goose Lake International Music Festival in Michigan the following month. Indeed, by the summer of 1971, The Stooges had officially split – at least until David Bowie helped resuscitate them early the following year.

Fun House, though, gradually morphed into a highly-acclaimed cult favourite containing some of the best Stooges songs. The UK punk scene played an essential role in the album’s rehabilitation, with The Damned covering 1970 (as I Feel Alright) on their landmark debut album, Damned Damned Damned, and substantial left-field acts, ranging from The Birthday Party to Depeche Mode and Spacemen 3, tackling songs from it during the 80s and beyond. By this stage, the media had cottoned on, with Melody Maker’s 1994 reappraisal (“no contest, the greatest rock’n’roll album of all time”) setting the tone for the hefty critical praise now lavished on a record once rejected as one of rock’s ugliest ducklings.

“As far as a rock album goes, Fun House is perfect the way [John Coltrane’s] A Love Supreme is perfect,” Henry Rollins told Rolling Stone. Having finally cemented The Stooges’ place among the most influential musicians of all time, the album was, Rollins added, “an inspiration to step up with whatever you have and to come on with it. Don’t compare yourself to anyone, just do your thing to the fullest. No matter what that is, Fun House is a great inspiration to get you in the right direction.”

Find out where The Stooges rank among our most influential musicians
of all time.