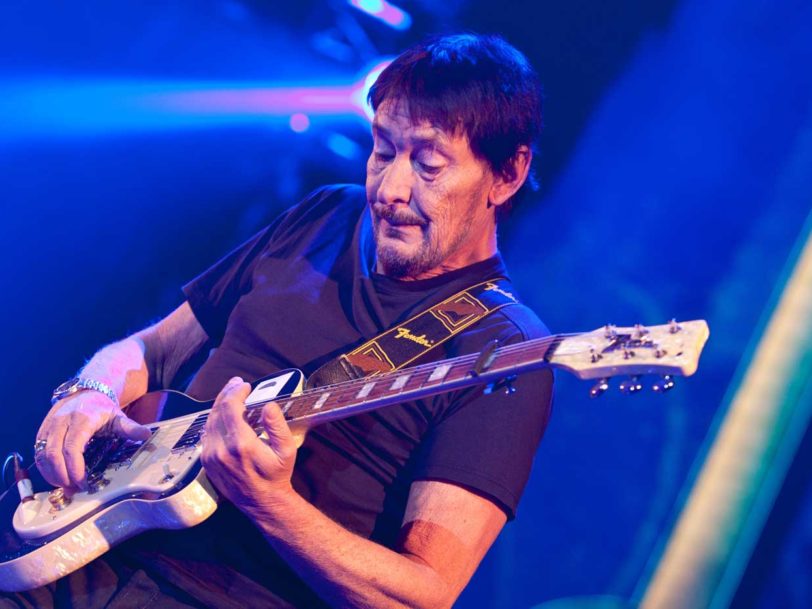 When Chris Rea first released Driving Home for Christmas, in December in 1986, he didn’t think much of it. It was a B-side, released as the flip of the single Hello Friend, which in his eyes meant no one would really pay attention to it. The song was simply an opportunity to have fun. Little did he know that this throwaway track would become one of his most recognisable accomplishments, and one of the best Christmas songs of all time

Written eight years before it saw the light of day, Driving Home For Christmas was inspired by Chris Rea, well, making his way home for Christmas, funnily enough. Explaining the experience to The Guardian, Rea’s inspiration sounded like a classic festive film plot that begins with him struggling get home to spend the holidays with his loved ones, until a Christmas miracle saves the day.

Rea had been recording at Abbey Road Studios in late 1978, but found himself down on his luck when his manager left him. His record contract was almost up, and the record company didn’t supply him with a train ticket home to Middlesbrough. Just when he thought all hope was lost, his wife offered to brave the 250-mile journey by car, driving her Austin Mini all the way to London in order to bring Chris home.

Keen to get home in time to enjoy the holidays together, the pair set off on their return journey as soon as they were reunited. In true Christmas fashion, however, it began to snow, which caused heavy traffic on the motorway. Amused by the how miserable the other drivers locked, Rea began to sing in a cheery tone, “We’re driving home for Christmas…” noting down lyrics whenever enough light shone into the car. When they got back to Middlesbrough at 3am, however, the sheet containing these lyrics was placed in a pile with many other unfinished songs, and was swiftly forgotten about.

It wasn’t until almost a decade later, when Rea was messing around while testing pianos with keyboardist Max Middleton, that he played something jazzy, delved back into his collection of unfinished songs and found the Driving Home For Christmas lyrics to be a perfect fit. Though he finished the song with Van Morrison in mind, Rea ended up recording it himself. Despite receiving no promotion itself, the Hello Friends B-side gained attention from radio DJs, prompting Rea to re-record an amped-up version of the song with a jazzy intro and a string arrangement that gave it a distinctive 50s Christmas carol feel. He then added it to his 1988 compilation, New Light Through Old Windows.

Despite being a radio hit, Driving Home For Christmas didn’t reach the Top 40, but it became a slow burner over the years. Since 2007, however, the song has entered the UK Top 40 every festive period, peaking at No.11 in 2018. Its popularity has also spread worldwide, reaching No.18 in Japan, No.2 in Norway and hitting the top spot in Slovenia. Now a much-loved Christmas classic, Driving Home For Christmas has been covered countless times, including versions by the likes of Michael Ball, Peter Andre, Spandau Ballet’s Tony Hadley and X Factor finalist Stacey Solomon.

Since it wasn’t a conventional single, Chris Rea’s Christmas hit didn’t receive a music video until two decades after its release. In 2009, the singer teamed up with housing charity Shelter in order to make a clip, of which all proceeds from digital downloads were donated to help combat homelessness. A cheesy, feel-good affair, the video features a string of celebrity cameos, including UK DJ Mike Read, footballer Jimmy Greaves and TV presenters Lizzie Cundy and Gail Porter. Finding themselves stuck in traffic, they decide to get out of their cars and share a dance.

According to Chris Rea, he didn’t play Driving Home For Christmas live until over 30 years after its initial release. He finally treated his fans to a live performance of the song at the Eventim Apollo in Hammersmith, in 2017, after being convinced by his road crew. When it comes to spreading Christmas cheer, Rea seems to “go big or go home”: for the song’s live debut, he hired 12 snow cannons which shot three feet of synthetic snow into the crowd. His commitment to putting on a show reportedly landed him a cleaning bill of £12,000.

Though Rea originally worried that releasing a Christmas song would ruin his credibility, he now fully embraces the Christmas spirit, telling The Guardian: “If I’m ever stuck on the M25, I’ll wind the window down and start singing, ‘I’m driving home for Christmas,’ at people in cars alongside. They love it. It’s like giving them a present.”

Motorways must be Chris Rea’s lucky charm. His 1989 hit The Road To Hell, written about the frustrations of rush-hour traffic, is the only song he’s released that has ever managed to beat Driving Home for Christmas’s top chart position. Coincidence, or some kind of Christmas miracle? It’s hard to tell, but, over three decades since its release, Driving Home For Christmas is spreading more cheer than ever.