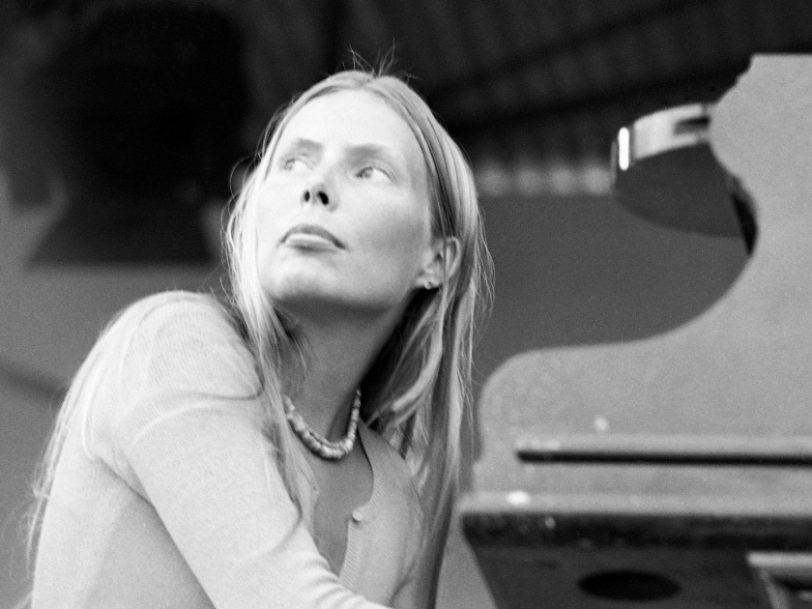 By the time her ninth album, Don Juan’s Reckless Daughter, was released, on 13 December 1977, Joni Mitchell had travelled a very long way from her coffee-shop folk roots. Here was a sprawling, wildly experimental double-album that saw her further establish herself as a contemporary of boundary-pushing jazz fusion acts such as Weather Report.

Though Don Juan’s Reckless Daughter baffled some critics, Mitchell’s followers wouldn’t have been surprised by its experimentation. A good deal of the album had been written years before, and Mitchell’s previous records (particularly 1975’s The Hissing Of Summer Lawns and the following year’s Hejira) had seen her moving steadily towards a sophisticated, jazz-inspired sound. Still, on Don Juan’s Reckless Daughter, Mitchell went for broke: take your pick from the 16-minute centrepiece, the awe-inspiring Paprika Plains; the wild exploration of polyrhythmic percussion that is The Tenth World; or from any number of examples of Mitchell throwing the traditional verse-chorus-verse structure of songwriting out the window, as if her poetic gifts demanded they be untethered.

A time to take stock

After appearing at The Band’s star-studded farewell concert, The Last Waltz, at the Winterland Ballroom, San Francisco, on 25 November 1976, Mitchell spent much of 1977 away from the public eye. Save for an encore appearance with Crosby, Stills And Nash at their 21 June concert at Madison Square Gardens, New York City, she didn’t appear on stage all year, having cancelled a European tour because of exhaustion.

Mitchell used her time to take stock. She was nearing the end of her record contract with Asylum, and saw it as an opportunity to revisit some material that had been simmering away for the past few years. She’d first played Jericho while on tour in support of her 1974 album, Court And Spark, and a version of the song had been included on the live album released later that year, Miles Of Aisles. Dreamland was considered for the tracklist of The Hissing Of Summer Lawns, and a clutch of other Don Juan’s Reckless Daughter songs began life thanks to Mitchell’s stint on Bob Dylan’s Rolling Thunder Revue tour in November and December 1975 – the album’s title track was first played live during her support set, and Talk To Me (a song about attempting to communicate with the emotionally elusive Dylan) was written while on the tour and aired on stage in January 1976.

Though some of the Don Juan’s Reckless Daughter material may have been around a while, Mitchell had new and exciting musical places to explore. She’d met jazz bassist Jaco Pastorius late in the sessions for Hejira, and had been so taken by his roaming, fluid and unpredictable playing that she overdubbed his bass parts on four of that album’s tracks. New studio sessions gave her a chance to record an entire album with Pastorius as a musical foil. Not only that, but Mitchell also sought the input of a number of Pastorius’ fellow Weather Report alumni.

As part of her exploration of jazz music, Mitchell had become increasingly interested in South American rhythms and was able to call upon percussionists from Brazil (Airto Moreira, who had appeared on the Weather Report’s self-titled album), Peru (Alex Acuna) and Puerto Rico (Manolo Badrena) to deepen the rhythmic textures of her new material. But the drummer who may have exerted the most influence on Mitchell’s development was the US-born Don Alias, who’d played on Miles Davis’ pioneering fusion masterpiece Bitches Brew, as well as albums by Dizzy Gillespie, Nina Simone and many more. Alias and Mitchell developed a close relationship, his jazz background encouraging her to explore that world further.

Mitchell went furthest out with the staggering Paprika Plains, another song in part inspired by an enigmatic conversation with Bob Dylan, as Mitchell told Cameron Crowe for Rolling Stone, in 1979.

“The next time we had a brief conversation was when Paul McCartney had a party on the Queen Mary, and everybody left the table, and Bobby and I were sitting there,” she recalled. “After a long silence, he said, ‘If you were gonna paint this room, what would you paint?’ I said, ‘Well, think. I’d paint the mirrored ball spinning, I’d paint the women in the washroom, the band…’ Later all the stuff came back to me as part of a dream that became the song Paprika Plains. I said, ‘What would you paint?’ He said, ‘I’d paint this coffee cup.’ Later he wrote One More Cup Of Coffee.”

From that jumping-off point, Mitchell crafted an epic fever dream of a song that deals with the difficulties faced by the indigenous people of her homeland, Canada, when confronted by the harsh reality of modernity. It’s a sprawling and supernatural musical journey, punctuated by bursts of billowing orchestration until, around the 14-minute mark, the band kick in and saxophonist Wayne Shorter takes it home with an expansive solo.

A glorious reflection of an inquisitive, erudite mind

Of the other newer tracks on the album, Dreamland and The Tenth World further demonstrate Mitchell’s sense of musical daring, with percussion taking centre stage, particularly on the latter, which was purely instrumental. And the album’s opening song, Cotton Avenue, might be the most concise example of the sweet spot between Mitchell’s songwriting ability and her burgeoning interest in jazz.

Taken as a whole, Don Juan’s Reckless Daughter is an often glorious reflection of an inquisitive and erudite musical and lyrical mind at a point where Mitchell was finding joy in unburdening herself of the shackles of her past. It effectively gave her a license to do whatever she liked next – which she absolutely would, teaming up with another jazz great, bassist Charles Mingus, on her 1979 album, Mingus.