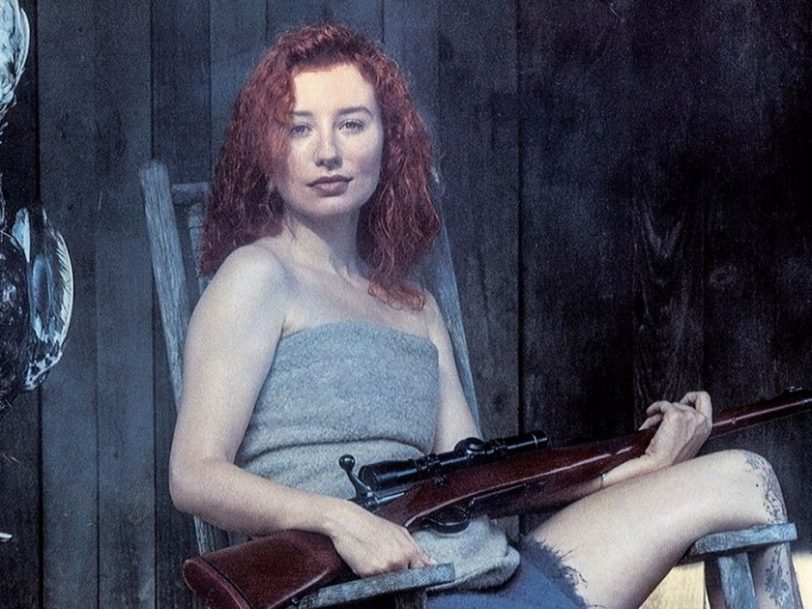 ‘Boys For Pele’: How Tori Amos Unleashed The Fire Within

“There comes a time in every musician’s development when you reach a crossroads,” wrote Tori Amos, in her liner notes for A Piano: The Collection, “and in order to develop as a composer and a creative force, you may have a take a road less travelled by the commercial music industry. From where I sit right now, in this second, I can honestly say that I do not know where I would be if I had not made Boys For Pele.”

Released in the UK on 22 January 1996, the singer-songwriter’s experimental third album marked a turning point in her path as an artist. If it was risky, it was a risk that paid off. Boys For Pele debuted at No.2 on both the US Billboard 200 and the UK albums chart, making it Amos’ greatest simultaneous transatlantic debut and the highest-charting US debut of her career to date. Nominated for a Best Alternative Album Grammy, the record also featured some of the best Tori Amos songs, such as Hey Jupiter, Caught A Lite Sneeze and Professional Widow. The last of the three, in the guise of US DJ Armand Van Helden’s remix, hit the No.1 spot in the UK with its unforgettable lyrics resounding in clubs and parties throughout the decade – “Honey bring it close to my lips, yeah/It’s gotta be big, it’s gotta be big.”

Listen to ‘Boys For Pele’ here.

“My world exploded, and I needed to explore different kinds of music”

With her first two albums, Little Earthquakes and Under The Pink, Amos had won a devoted fanbase as well as scored a few hits, but the sprawling, richly varied and wildly inventive Boys For Pele solidified her reputation as an artist unafraid to take risks. “My world kind of exploded,” Amos told Stereogum of the time after her first two albums, “and I think – if I’m honest with you – people in the industry, they want you to make similar records and work with producers that will give you a commercial record. Because Under The Pink was a successful album, I was feeling like I had done that, and I needed to explore different kinds of music.”

Amos’ personal life had also seen significant change. In 1994, she split from her long-term partner Eric Rosse, who co-produced her first two albums. “I guess I wanted to carve out my own place,” she told Stereogum. As the sole producer on her new record, Amos decided to record the bulk of the experimental album – which featured more than 75 musicians, from the London Symphonia, gospel choirs, Caribbean percussionists and Louisianan brass bands – in an Irish church. She was struck by “the idea of speaking my truth, no censorship, in a place that did not honour anyone’s truth unless it was the church’s truth”, as she explained to The Cincinnati Post.

“It’s going after those programs of the feminine”

Inspiration for the album’s title and concept struck further afield, while on a visit to Hawaii’s Big Island. There, Amos learned about the volcano and fire goddess Pele, who demanded sacrificial male flesh: “The boys are those who have brought me to my fire with what they have or haven’t given me,” she explained. In a further liner note for A Piano, she added: “Maybe I was envious that men could traverse and pioneer different tastes for themselves. They could plug in without repercussions. So finally, instead of sneaking around and trying to steal their fire, I let myself into that vastness.”

Vastness is the word. In Boys For Pele, Amos seems to tap into something elemental – two of the songs, Marianne and Not The Red Baron, were downloaded directly “from the muses”, as the artist puts it, and what we hear on the record is Amos playing them for the very first time.

With 18 sometimes sketch-like tracks, the album is significantly longer than her first two records, and Amos has spoken of the songs as “fragmented demons of womanhood”. Like much of the record, Beauty Queen/Horses, the opener, combines the delicate with the primal. As Amos – herself a homecoming queen at Richard Montgomery High in Rockville, Maryland – said of the track in an interview with B-Side magazine, “She’s a beauty queen, and that’s not enough, because it never is… So it’s going after those programs of the feminine, going after them, going after them.” She starts that journey – or quest for healing – on horseback: “And maybe I’ll find me a sailor/A tailor/And maybe together/We’ll make mother well.”

“I was following a bloodline musically as well as geographically”

If her first album was a diary and her second an impressionist painting, Boys For Pele, according to Amos, was her novel, with each song telling an excerpt of the story. It’s an album of mixed moods, with delicate, ethereal songs, such as Father Lucifer and Marianne, sandwiched between visceral powerhouses such as Professional Widow and Blood Roses. According to Amos, the latter sums up the album: “I think because bloodlines are such a big part of that story. Following my own bloodline, Christianity, that moved from the hills of Virginia back to Ireland and Scotland, I made the decision to record Pele in Ireland. I was following a bloodline musically as well as geographically, and how religion and music had come over to the New World.”

Learning to play the harpsichord was part of this journey, and on the extraordinary Blood Roses she plays that delicate instrument with absolute conviction, contorting her beautiful voice into an unholy noise that might have come from the birds themselves as she sings: “When chickens get a taste of your meat/When he sucks you deep/Sometimes you’re nothing but meat.” A bell chimes like a death knell throughout this vampiric track. Whatever aspect of femininity she’s exploring here, it isn’t pretty, and Amos makes no apology for it. “I shaved every place where you been,” she sings in the song’s most famous line.

Boys For Pele is unafraid to go to ugly places, as Amy Gentry points out in her 33⅓ book on the album. “I didn’t want to play seductive little girl or ballbuster anymore,” Amos said in an interview for Live105 San Francisco. “With this record I played all those roles until I got to my heart. To find your fire as man or woman you have to take your torch and go to the shadows.”

The record’s gaze is as unflinching as the artist’s on the cover, where she sits on a rocking chair, plastered in mud and brandishing a rifle (though all anybody wanted to talk about at the time was the piglet suckling at her breast in the booklet). “Well, it’s a reference to Me And A Gun, a song I wrote that was on Little Earthquakes,” Amos noted. “And the idea that there’s a dead cock on my right and a live snake on my left. And the idea is that death and life… creation… what it’s taken me to get here with men, and I don’t want to be angry anymore.”

Boy For Pele isn’t just about anger – it’s a record of many moods and sprawling complexity. Caught A Lite Sneeze, one of the first tracks ever to be made available as a free internet download, is a case in point. The song’s percussion and explosive harpsichord give it the urgency of an alarm, though its precise meaning is hard to pin down: “Boys on my left side/Boys on my right side/Boys in the middle and you’re not here/Boys in their dresses/And you’re not here/I need a big loan from the girl zone.”

In the exquisitely constructed Father Lucifer, Amos duets with herself in lyrics so mystifying that, as a listener, you have little choice but to let them wash over you. Her father, a Methodist minister, was not thrilled at the time. “My father said to me, ‘Tori Ellen, I can’t believe you wrote this song about me,’” she remembered on VH1 Storytellers. “And I said, ‘I write everything about you, what are you surprised about?’ And he said, ‘No, but I’m really hurt about this one.’ And I said, ‘Well which one is it?’ And he said, ‘Well, you called me Satan.’ And I said, ‘No! I was taking drugs with a South American shaman, and I really did visit the Devil and I had a journey.’ And he went, ‘Oh, praise Jesus!’”

The church is there, though, as it is in so much of Amos’ work. In Muhammad My Friend, she chides gently, “It’s time to tell the world/We both know it was a girl/Back in Bethlehem.” In the heart-wrenching Marianne, inspired by a young girl Amos knew from her school days who’d died, there is what she calls “the whole Mary Magdalene reference” – a motif she returns to again and again.

“It’s about trying to step into womanhood from girlhood”

On a record with such a large cast of characters – Marianne, Talula, Father Lucifer – it is telling that at the midpoint, Hey Jupiter, we catch a glimpse of Amos herself laid bare: post breakup, in a hotel room, feeling shipwrecked by loss. The song came to her in John Lennons voice: “I was in Arizona at the time, in the desert, and I was hearing him say: ‘No one’s picking up the phone. Guess it’s me and me, and this little masochist, she’s ready to confess.’”

Arguably the album’s turning point, Hey Jupiter was, Amos said, about “trying to step into womanhood from girlhood”, and it leads to a more peaceful second act. By Not The Red Baron, she has reached a “moment of compassion for all the men on the record”, as she told B-Side. “It’s where I could see their planes crashing, I could see that they have a side, too.” In Boys For Pele’s penultimate track, Putting The Damage On, she’s still trying on masks or roles, urging herself to do her “best Angie Dickinson” after the split from her partner. Yet the word she chooses to describe her ex is “pretty” – not handsome or rugged. Like its bedfellows, it’s another nuanced exploration of masculinity and femininity. It’s also one of the most straightforward songs on an astoundingly complex album, and it breaks your heart every time.

Check out the best Tori Amos songs to find out which ‘Boyd For Pele’ tracks burn brightest.