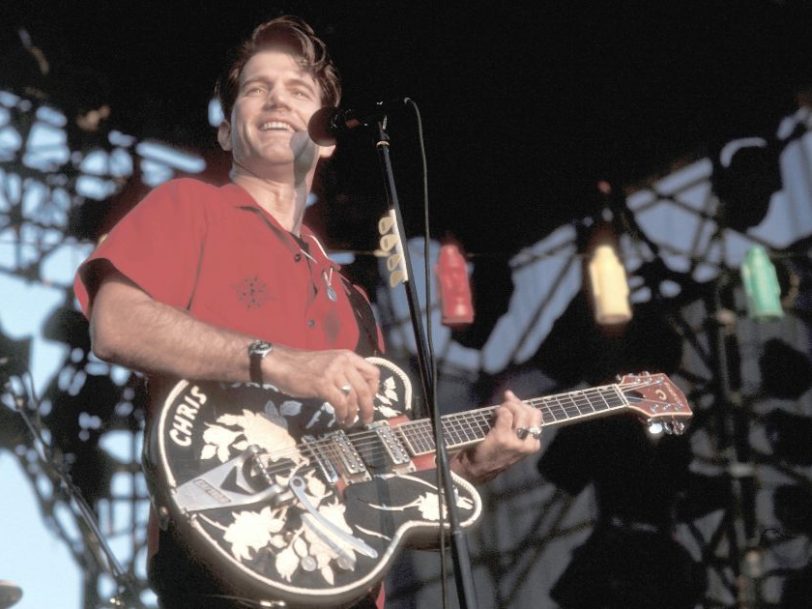 With his soulful croon and bluesy reimagining of 50s rock’n’roll, the best Chris Isaak songs brought rockabilly cool back from the brink.

In thrall to the delirious twang of surf rock and the reverb-addled gusto of early rock’n’rollers such as Jerry Lee Lewis and Carl Perkins, Chris Isaak brought a retro cool to the late-80s MTV generation. Catching the ear of film directors and Hollywood leading ladies alike, the best Chris Isaak songs made listeners swoon and sway to his intoxicating soft-rock mojo, updating a long-forgotten mode of melancholia for the modern era. With a clean production style that has gone on to influence the likes of Lana Del Rey, Isaak’s songwriting has undoubtedly stood the test of time. From the spring reverb colour-burst of Blue Hotel to the cinematic sensuality of Wicked Game, here are the best Chris Isaak songs…

Released as the second single from his album of the same name, the beatific ballad San Francisco Days is a delightful and melancholic Bay Area charmer reportedly written at Chris Isaak’s beachside home. “If I stand up I can see the ocean,” Isaak said, “so that’s good inspiration.” The song peaked at No.62 in the UK in July 1993, and perfectly captured the mid-afternoon glow of the Frisco sun.

After being thrust into the limelight following the inclusion of Wicked Game on the soundtrack to David Lynch’s 1990 movie, Wild At Heart, Chris Isaak released Blue Spanish Sky as the lead single to his 1991 compilation, Wicked Game. A maudlin acoustic ballad full of sullen crooning and lazily swaying with mariachi horns, the song had originally appeared on his Heart Shaped World album, and its single release gave the singer the opportunity to play on Tonight With Jonathan Ross in the UK. Further buoying interest in Isaak’s smooth-voiced breed of balladry, Blue Spanish Sky easily stands among the best Chris Isaak songs.

Drenched in the same guitar reverb effect that made Wicked Game an international success, Can’t Do A Thing (To Stop Me) aimed to emulate that same spark of simmering sensuality, and was chosen as the lead single from Isaak’s 1993 album, San Francisco Days. Peaking at No.36 in the UK and No.7 on the US Modern Rock Tracks chart, the dual effect of the song’s surf-inspired twang and soft-spoken female backing vocals is the sonic embodiment of easy-listening bliss.

With a rockabilly groove and a 60s-inspired garage-rock organ hook, Go Walking Down There mixes Chris Isaak’s gift for heartbroken lyricism with a lively, finger-wagging chorus (“Look at all you happy people, I wish I could be like you”). Reaching No.32 on Billboard’s Modern Rock Tracks chart, it struts its way into our list of the best Chris Isaak songs thanks to its devil-may-care swagger. “If it’s fun for me and the people I’m doing it with, it shows up on the record,” Isaak said in a 1995 interview.

The lead single from Chris Isaak’s self-titled second album, You Owe Me Some Kind Of Love is a limbering rockabilly cut which readied Isaak for his sprint into 50s rock’n’roll cool. Directed by Jean-Baptiste Mondino, its music video brilliantly updated the sultry vibe of Elvis Presley for the MTV era. “The first time I saw Jean-Baptiste’s work all he had was a bunch of commercials in France,” Isaak said. “I didn’t understand anything they were talking about, but they were interesting and cool-looking. So I thought he would be a good guy to do a video.”

As one of the best Chris Isaak songs, Somebody’s Crying became a huge hit for the singer following its release in May 1995, but its sunny roots-rock melody obscures the fact that it began life as a morbid reflection on a breakup. “I had just broken up with someone and hadn’t been out of the house much,” Isaak told The Oak Ridger. “A friend of mine was having a party and as soon as I arrived I realised I didn’t want to be there.” Deciding to lock himself in a closet, Isaak spotted a guitar and wrote Somebody’s Crying while hiding under a pile of coats. Going on to peak at No.45 in the US Hot 100, Somebody’s Crying became Isaak’s biggest hit since Wicked Game.

While under the wing of Erik Jacobsen, the man who produced The Lovin’ Spoonful and Norman Greenbaum’s Spirit In The Sky, Chris Isaak recorded his debut single, Dancin’ – a hip-swaying little firecracker that would ignite the singer’s career. A highlight from his first album, Silvertone, the song sees Isaak summon the spirit of Elvis and the soulful croon of Roy Orbison, while guitarist James Calvin Wilsey shines with fervent riffs. The single failed to make much impact upon its original release, in February 1985, but a reissue in 1991, following the success of Wicked Game, eventually saw it enter the UK singles chart.

Mixing the hushed eroticism of Isaak’s deep vocals with a blues-rock riff ZZ Top would be proud of, Baby Did A Bad Bad Thing peaked at No.44 in the UK after it was reissued following its use in Stanley Kubrick’s 1999 drama, Eyes Wide Shut, starring Tom Cruise and Nicole Kidman. Isaak described the song as being about “somebody who is so evil and twisted and bad, and yet, you still want them”, and it was Kidman who suggested using it during the couple’s sex scene. “She brought that song and was dancing to it and Kubrick heard it and went, ‘That’s perfect,’” Isaak later said. “So I have Nicole to thank for that.”

Like a resident at the Heartbreak Hotel, Chris Isaak channels Elvis Presley for the intro to his 1987 single Blue Hotel before the song explodes into a reverb-filled surf-rock tsunami. With Isaak wailing about loneliness, James Calvin Wilsey’s Duane Eddy-like guitar riffs practically shower the listener in sea spray. As Isaak’s first single to gain traction in the UK, Blue Hotel made enough of a wave to prove that it was only a matter of time before the singer’s retro-rock came bursting through the floodgates.

Thanks to its exquisite blend of James Calvin Wilsey’s heart-rending guitar riff and Chris Isaak’s imploring falsetto, Wicked Game has endured as one of the best love songs to emerge from the late 80s. Hugely influential, it was first released as a single in July 1989, but it wasn’t until film director David Lynch used an instrumental version of the song in his 1990 movie, Wild At Heart, that a reissue saw Wicked Game peak at No.6 in the US and No.10 in the UK. Almost overnight, Chris Isaak became a pop superstar, successfully bringing his 50s-style songwriting into the mainstream. With its evocative air of palpable lust and carnal longing, Wicked Game remains one of the greatest songs ever written about obsessive love, and that’s why it tops our list of the best Chris Isaak songs.

Looking for more? Check out our best love songs of all time.