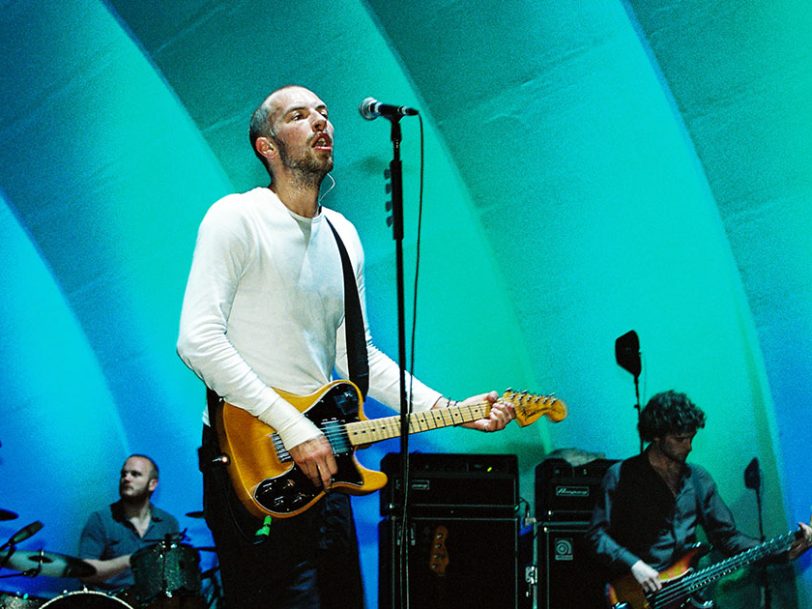 ‘A Rush Of Blood To The Head’: Behind Coldplay’s Dizzying Second Album

Eight months in the making, Coldplay’s ‘A Rush Of Blood To The Head’ album tackled post-9/11 anxieties which left fans reeling.

With their heads in a whirl following a 12-month tour in support of their debut album, Parachutes, Coldplay immediately set about recording its follow-up in October 2001, just a month after the 9/11 terrorist attacks in New York City. With the public disconsolate and looking for answers, Coldplay frontman Chris Martin was deeply affected as a songwriter – not just by the political anxieties in the air but also by heartbreaks brought on his own recent romantic experiences. In contrast to the lo-fi acoustic vibe of their previous record, the band set out to make their second album bigger and bolder, perhaps knowing they needed a more expansive sound that could fill arenas and compete with the likes of U2. However, due to lingering fears of fatigue and writer’s block, progress on the album was slow but steady, with Chris Martin reportedly writing more than 20 songs for consideration.

Listen to ‘A Rush Of Blood To The Head’ here.

As a songwriter, Martin’s perfectionism was as unrelenting as always, though guitarist Jonny Buckland fondly remembers the recording experience, admitting the possibilities were endless. “We just felt completely inspired, and felt we could do anything we liked,” he said. “We didn’t have to do the acoustic thing, we didn’t have to do a loud rock thing, we didn’t have to react against anything.” Hopping from the Mayfair and AIR Recording Studios, in London, to Parr Street, in Liverpool, the band worked on the record well into June 2002, but, thanks to the stellar involvement of producer Ken Nelson, A Rush Of Blood To The Head eventually took shape as one of the best 2000s albums.

“The name of the album means doing something on impulse”

Due in large part to the widespread success of their breakthrough hit, Yellow, from Parachutes, Coldplay were invited to headline Glastonbury Festival that summer, two months before their new album was released. Remarkably, four years earlier, Chris Martin had predicted this would happen. “By the 26th of June 2002,” he said on a 1998 home video featured in the documentary A Head Full Of Dreams, “Coldplay… will be known all over, man! Guy, Will, Jon and Chris. Don’t you forget – massive! Absolutely huge!” After playing to a crowd of 140,000 festival-goers, it must have felt as if his wildest dreams had come true.

By now, Coldplay were already considered to be one of the best British bands of the era, and they readied the public for the release of their second album by unveiling its lead single, In My Place. The song had started life when Martin playfully threw a melody together on a pump organ and improvised his own sea shanty. With chords inspired by A Whiter Shade Of Pale, by Procol Harum, and music by Jimmy Cliff, the song quickly took on a life of its own thanks to Jonny Buckland’s chiming guitar riff and Will Champion’s thunderous drums. “When Jonny played me the guitar part I thought, Well, we have to record that. It’s the best song we’ve ever written,” Martin later said. Released on 5 August 2002, In My Place peaked at No.2 in the UK and perfectly set the scene for the band’s much-anticipated sophomore record.

When A Rush Of Blood To The Head followed, on 26 August 2002, its artwork alone was destined for iconic status. Designed by Norwegian artist Sølve Sundsbø, it featured a starkly illustrated bust created by a 3D scanning machine, perfectly complementing the album’s themes of technological disjointedness and emotional dislocation. Explaining their new work’s title, Martin said: “The name of the album means doing something on impulse… My grandfather always used to tell me to do things right now because whatever you have, it’s not gonna last forever.”

Kicking off with the stomping opener Politik, A Rush Of Blood To The Head introduced Coldplay’s politically charged new mindset while also capturing the sense of weary disillusionment the wider world felt in the wake of the “War On Terror”. “I was feeling a bit angry and upset because of the state of the world, and so this song just came out,” Martin said of the tune. “Of course, the album is affected by September 11.” Like Radiohead before them, Coldplay’s music was soundtracking their times, with Martin’s heart-rending lyrics tapping into post-millennium woes.

Elsewhere on the album, the rippling sitar effect on Daylight conjures an Eastern vibe while the title track finds Martin imagining what it would be like to set off on a one-man military conquest (“I’m gonna buy a gun and start a war/If you can tell me something worth fighting for”). With songs reflecting on the death of friends, loved ones and the demise of romantic relationships, A Rush Of Blood To The Head amps up Parachutes’ palpable melancholia with beefier arrangements befitting a band that would soon be hailed among the best 2000s musicians.

Released as the album’s second single, the masterful piano-led ballad The Scientist peaked at No.10 in the UK and saw Martin ponder the mystery of love from the perspective of a man of science. Mirroring the song’s ideas of time anxiety, its memorable music video, directed by Jamie Thraves, had the singer walking backwards through time before revealing that he and his lover had been victims of a car crash. “It took Chris a month to learn the lyrics backwards, I believe,” Thraves said. As one of the best Coldplay songs, The Scientist was inspired by George Harrison’s All Things Must Pass and was undoubtedly a huge leap forward that marked Coldplay’s frontman out as one of the UK’s finest songwriters.

“We were all just staring and thinking, My god, this is something really special”

Martin’s growing confidence is in abundance throughout the record: the shuffling country-rock of Green Eyes was said to be inspired by a former love interest in the US, while A Whisper bears the unmistakable influence of Echo And The Bunnymen songwriter Ian McCulloch, who reportedly spent time with the band in the studio as an unofficial consultant. Meanwhile, despite nearly being left on the cutting-room floor, Warning Sign is a masterful evocation of how apathy is personal and not just political. Boasting melodies as epic as U2 and as emotive as R.E.M., it was clear A Rush Of Blood Of The Head had positioned Coldplay as a top-tier rock act who had mastered their craft.

The album’s third single, however, was the real game-changer. With its vacillating piano tones, Clocks was composed with a watchmaker’s precision. “The riff just came out,” Martin told Cleveland’s Plain Dealer, “and I showed it to Jonny and he wrote these cool chords underneath it, and we had a song that was mega.” Becoming the band’s biggest US hit to date, following its release in November 2002, Clocks peaked at No.29 stateside and entered the UK Top 10 at No.9. Producer Ken Nelson knew it would be a success from the start: “I remember when Chris was doing the vocal,” he said, “we were all just staring and thinking, My God, this is something really special.”

Not only did Clocks become Coldplay’s signature tune, but it is also fondly regarded today as one of the best 2000s songs[link to bests 2000s songs when live]. Like watching sand flow through an hourglass, the song captures Martin’s view of time misspent (“cursed missed opportunities”), imploring the listener to be part of the cure, not the disease. As on the album’s chilled-out closer, Amsterdam, which Martin penned in Iceland, love is the songwriter’s lynchpin and guiding compass. “And that’s born from all the places we’ve been and the things we’ve experienced. Some of our friends have died and some of us have fallen in love,” he said. “All this stuff has been happening to us, and now we have the opportunity to put it into some songs.”

“We poured every ounce of soul, emotion and love into it”

The final single to be released from the album was the sprightly acoustic number God Put A Smile Upon Your Face, issued in July 2003. “That came out of playing live and wanting to have something with a bit more bounce,” Chris Martin said. “We were really getting into things like PJ Harvey and Muse – things with a bit more energy.” Though the single failed to match the chart success of its predecessors, the song still remains a thought-provoking meditation on mortality, and bassist Guy Berryman considers it one of his favourite Coldplay songs.

A pivotal release for Coldplay, A Rush Of Blood To The Head shifted 274,000 copies in its first week and went on to sell 15 million copies worldwide. Topping the album charts in 27 countries, the record became an instant classic, and it still ranks highly among the best Coldplay albums. “We poured every ounce of soul, emotion and love into it,” Chris Martin admitted, no doubt hoping the mix of sweeping anthems and love balladry would be a balm for a world reeling from disaster. Without a doubt, the healing power of its songs was self-evident – not only does A Rush Of Blood To The Head stand the test of time, but it also assures Coldplay’s status among the decade’s greatest alternative-rock bands.