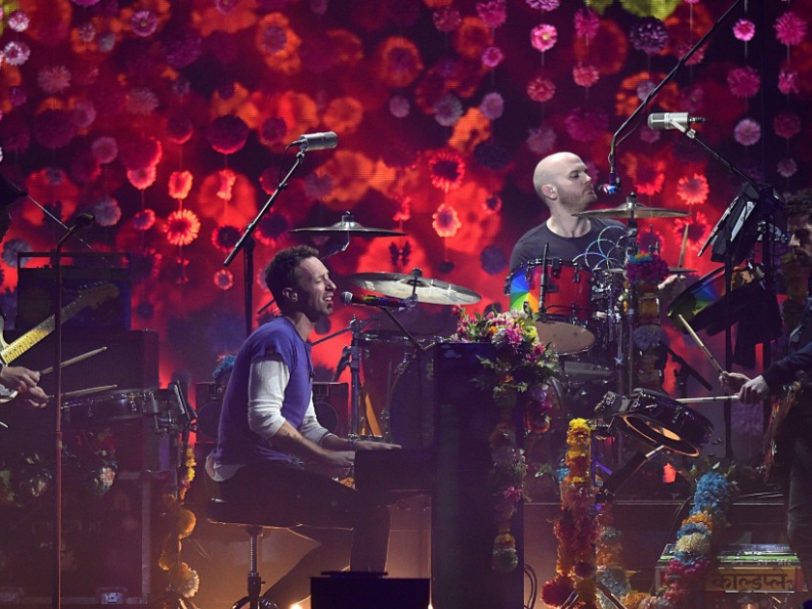 ‘A Head Full Of Dreams’: Behind Coldplay’s Kaleidoscopic Seventh Album

With ‘A Head Full of Dreams’, Coldplay fused alt-rock sincerity with contemporary pop, exploding in colour like a burst of holi powder…

Having spent the past 15 years as the UK’s biggest band, it was hard to imagine how Coldplay could take it to the next level in 2015. The group’s previous album, 2014’s Ghost Stories, had found Chris Martin at a melancholic ebb following his divorce from wife Gwyneth Paltrow. The world had moved on, so he was eager for Coldplay’s next record to reflect his newfound gratitude and contentment for life. Inspired by a 13th-century Persian poem by Rumi called The Guest House, Martin related to its message that emotions – both joy and despair – should be treated as guests one should welcome. By opening the door to these feelings, Martin’s zen-like outlook entered his songwriting, setting the stage for Coldplay to conquer the world once again with their seventh album, A Head Full Of Dreams.

Listen to ‘A Head Full Of Dreams’ here.

“We just wanted to embrace our love of joyful music”

As if immersed in the colours of a rainbow, A Head Full Of Dreams’ lead single, Adventure Of A Lifetime, made it immediately obvious that Coldplay’s new album would be a happier affair than its predecessor. A dance-pop firecracker tightly coiled around a corkscrew-like guitar riff from Jonny Buckland, the song, originally titled Legends, came about when Buckland was challenged to create a riff as catchy as the one guitarist Slash devised for Guns N’ Roses’ Sweet Child O’ Mine. “We just wanted to kind of embrace our love of joyful music and sort of let it free,” Chris Martin said. Released in November 2015, Adventure Of A Lifetime peaked at No.7 in the UK and was instantly regarded as one of the best Coldplay songs, kick-starting their new sonic voyage in intrepid style.

Embracing a sense of fun, the innovative music video for Adventure Of A Lifetime came about after a chance meeting with Andy Serkis, the actor who portrayed Gollum in Peter Jackson’s The Lord Of The Rings trilogy, and the founder of the motion-capture studio The Imaginarium. Enlisting Serkis’ help, the band spent six long months working on the big-budget animation promo, with Martin, Buckland, bassist Guy Berryman and drummer Will Champion wearing mo-cap suits and posing as chimps dancing in the jungle. Lavishly produced, the video for Adventure Of A Lifetime was Coldplay’s most technologically ambitious undertaking at the time and has garnered well over a billion YouTube views.

Sporting an album cover featuring multi-coloured illustrations and a Flower Of Life designed by Argentine artist Pilar Zeta, A Head Full Of Dreams was released on 4 December 2015. Leaning heavily into contemporary pop sounds and unfolding like a lucid dream, the album was produced by Norwegian production duo Stargate and saw Coldplay diversify their stadium-rock credentials with dance-based synths and electronic percussion. The album sold over 230,000 copies in its first week and reached No.2 in the UK, becoming Coldplay’s highest-selling album since 2008’s Viva La Vida Or Death And All His Friends.

A strong spirit of collaboration is evident throughout A Head Full Of Dreams. Not only did Martin’s children, Apple and Moses, sing backing vocals on some tracks, but he also persuaded R&B icon Beyoncé to guest on the piano-pop party ballad Hymn For The Weekend, which was released as the album’s second single, in January 2016. In its glamorous music video, shot in Mumbai and paying tribute to Indian culture, Beyoncé appears wearing a skin-net lotus sequin dress, along with Bollywood star Sonam Kapoor. The song reached No.6 in the UK and No.25 in the US, continuing Coldplay’s stronghold on the pop charts.

On Everglow – a deeply personal ballad Martin wrote about “the joy someone leaves you with after they’ve gone” – the singer’s ex-wife, Gwyneth Paltrow, duets. “Everyone who got asked to sing on our album has an important part in our lives,” Martin said. Elsewhere, the Swedish electro-pop star Tove Lo pops up to sing alongside Martin on Fun, a song that elaborates on Rumi’s poem in the context of Martin’s divorce (“I know it’s over before she says/Now someone else has taken your place”). Ultimately, what shines through on A Head Full Of Dreams is Martin’s deeply-felt sense of gratitude, with songs basking in uplifting melodies that share his celebratory view on treasuring memories and accepting loss.

Prior to kicking off a carnival-esque world tour in support of the album, Coldplay played Super Bowl 50 to an estimated audience of 300 million people, in February 2016. Dressing in gaudy colours and flaunting a new multi-coloured aesthetic, the band pulled out all the stops to remind everyone why they were a must-see stadium act. Not only that, they also had a timely message to impart: thanks to Martin’s cosmopolitan outlook, the songs on A Head Full Of Dreams espoused a belief in the power of love and how we should embrace each other’s differences across the world, even in spite of heartache.

In championing the unique roles people play in each other’s lives, Martin had even managed to coax Oasis songwriter Noel Gallagher to lay down a guitar solo on album closer Up&Up. “I love Noel,” Martin said. “We’ve been blessed over the years to have mentors within music.” Released as A Head Full Of Dreams’ third single, in April 2016, Up&Up was described by Martin as “our defining credo and is about a different way of looking at the world”.

Going on to sell 3.6 million copies worldwide, A Head Full Of Dreams re-asserted Coldplay’s place as the UK’s most successful band of the 21st century. Their pyrotechnic-filled and light-show-laced world tour ended up lasting two years and became one of the highest-grossing concert tours of all time. As for the album itself, Martin remains particularly proud of A Head Full Of Dreams, considering it a true band effort and a labour of love. “It’s quite a hippie album,” he has said. “All of our records were a journey to get to this one.”

Having embarked upon the adventure of a lifetime, A Head Full Of Dreams proved Coldplay could bring vitality and colour to any destination they so desired.