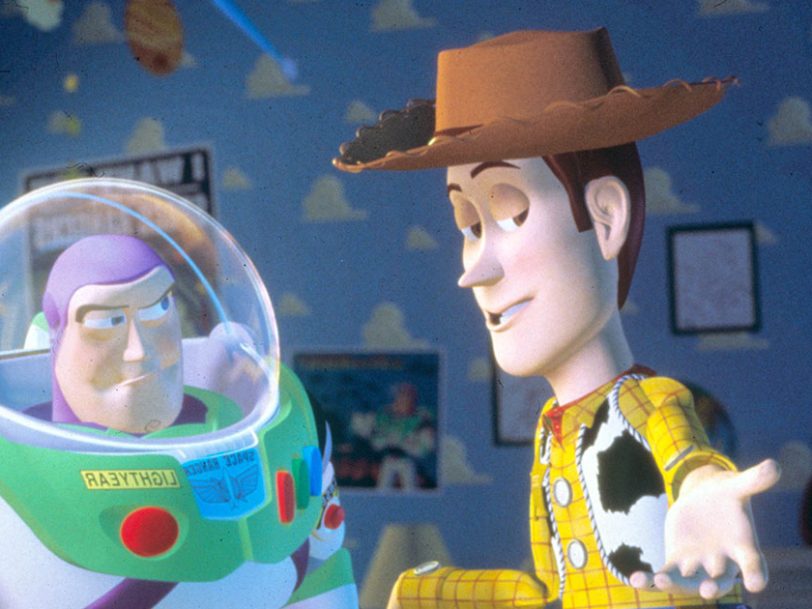 Despite holding parallel careers as one of the best songwriters of modern times and as an accomplished film composer, Randy Newman was a wildcard choice to pen the score for Pixar’s landmark 1995 animated film, Toy Story. From the late 60s, Newman had made a name for himself as a writer of songs steeped in irony and satire; he may have been capable of moments of tenderness and melodic beauty, but he wasn’t the most obvious option for a children’s movie. However, as You’ve Got A Friend In Me – the Toy Story franchise’s theme song – has proven, he was the perfect fit.

Listen to the best of Randy Newman here.

“He would deliver the emotional underpinning for every scene”

Released on 22 November 1995, Toy Story was no ordinary kids’ film. It was the first entirely computer-animated feature-length movie, and the debut feature from the Disney-affiliated Pixar Animation Studios. First-time director John Lasseter sensed a chance to make a different kind of animated film, with jokes designed to appeal to an adult audience, and an emotional resonance that had been missing in traditional animation. Lasseter knew it would require songs a cut above the usual fare in terms of sophistication, as he told Entertainment Weekly in 1995: “[Newman’s] songs are touching, witty and satirical, and he would deliver the emotional underpinning for every scene.”

Newman delivered three songs for the film, as well as the instrumental score. Strange Things was a jaunty, comic song reflecting toy cowboy Woody’s feelings on his owner’s shiny new toy – a spaceman called Buzz Lightyear. I Will Go Sailing No More was a bittersweet lament that soundtracked Buzz’s realisation that he was a mere doll, rather than a genuine spaceman. But it was You’ve Got A Friend In Me, a warm-hearted song that offers reassurance in the face of mounting difficulties, which became the film’s main theme. In the movie, it was about the relationship between Woody and his owner, Andy, but the song’s theme was universal enough for it to be applied to different character relationships throughout the Toy Story franchise – and to viewers’ real-world lives, too.

“They said, ‘Emphasise the special friendship between Woody and Andy’”

Speaking to The Ringer in 2019, Newman revealed how he wrote songs to order: “I always find out what they want. And they said, ‘Emphasise the friendship, the special friendship, between Woody and Andy.’ And they mentioned that a bunch of times. And then I always ask for adjectives, like fast, slow, friendly. Just like that, non-musical ones… When I have an assignment and people tell me what they want… I can do it pretty quickly.”

For Newman, writing on demand brought out a different side to his songwriting. While he’d usually be tempted to approach subject matter from a more cynical angle, for You’ve Got A Friend In Me he played it straight. Speaking about these opposing styles, he told BBC Radio 4’s Mastertapes, “They’re radically different. You think I’d write You’ve Got A Friend In Me? I sound like a used car salesman. But that’s what that picture needed, and I can do that and I’m proud of that ability.”

Released as a standalone single on 12 April 1996, You’ve Got A Friend In Me became one of the biggest hits of Newman’s career and exposed his considerable gifts to a new generation of film lovers. The song also earned Newman an Academy Award nomination for Best Original Song, while his Toy Story soundtrack received a nomination for Best Original Score.

Newman reflected on his late and unlikely flirtation with mainstream success to The Ringer. “I’m grateful that this stuff drags me into the midstream, sort of, or close to it, because otherwise I’d never get there,” he said. “When I’m writing for somebody I can do it, but for myself I just don’t seem to do it. I like what I write for myself best, in a way, but I’m really glad that people like You’ve Got A Friend to the extent that they do.”

Not only has You’ve Got A Friend In Me featured in each instalment to date of the hugely successful Toy Story franchise, but, as one of the best movie songs of all time[], is has also attracted some notable cover versions. Michael Bublé, George Jones and Kathy Mattea, Kenny Loggins and Brian Wilson are among the artists who have paid tribute to Newman’s song. But nothing beats its creator’s performances, either on the original Toy Story soundtrack or the stripped-back version he released on his 2016 album, The Randy Newman Songbook Vol.3.

See where You’ve Got A Friend In Me ranks among our pick of the best film songs in history.