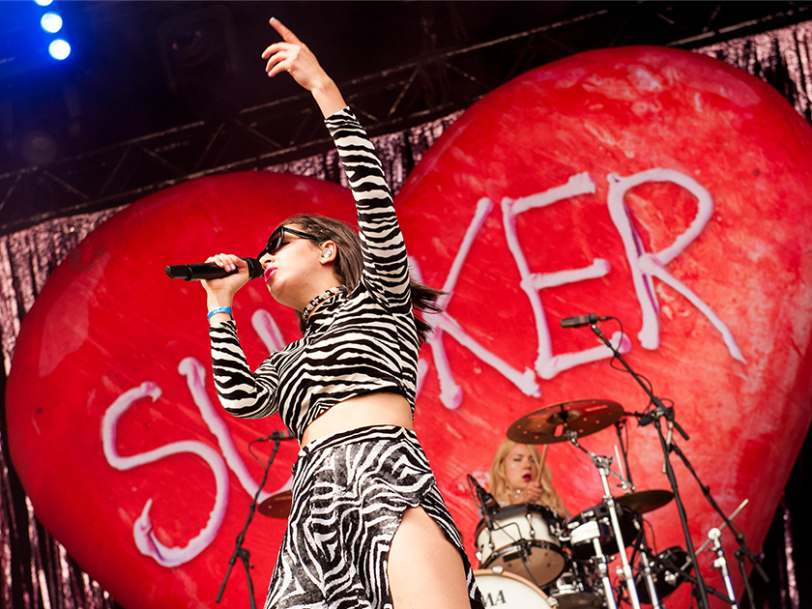 ‘SUCKER’: How Charli XCX Proved She Was No Pop Pushover

With her second album, ‘SUCKER’, Charli XCX proved her star quality and set a benchmark for modern pop music.

In 2014, Charli XCX was 22. She had been writing, recording and self-releasing music since the age of 14. And by the time of Sucker, her second album, the world was ready for her. “My songs have always been amazing,” Charli XCX said around the time of the album’s release, at the end of that year. “But now it’s just like people want to listen to them because I wrote a couple of big songs.”

The “big songs” were I Love It, for Icona Pop, and Fancy, with Iggy Azalea. In each case, as well as composing the tracks, Charli was also a featured artist on the recordings. Both of these songs were cocky, carefree bangers, and their sales figures were huge – way in excess of Charli’s first album, 2013’s artful True Romance. Therefore, these songs were the de facto introduction that most pop fans had to Charli XCX’s messy, emotional, addictive style. And there was a lot more where they came from. “I write – since I Love It blew up – every day. Every single day,” she said.

This kind of prolific output leads to false starts and aborted projects as well as hits, and so it was in the run-up to recording Sucker. Following the release of True Romance, Charli “went to Sweden and made a punk album”. A track from these sessions, Allergic To Love (originally by Swedish act Snuffed By The Yakuza), surfaced on SoundCloud; it was one minute and 11 seconds of frenzy, like a lost 7” from 1978.

“I just started over-thinking things and I needed to not give a fuck,” Charli said of this period. “Making punk music is the perfect recipe for that. I needed to not give a shit about what was going on. I wanted to just make music and lie on the floor in the studio screaming for hours on end, getting out all of this shit that was inside of me. It worked; I think it led me to a more creative place.”

“I wrote this record for girls, and for everyone on the planet with a pussy”

That creative place birthed the songs that would become Sucker. Charli has said that Sucker would not have sounded the way it did without the punk album. “It morphed into a new thing,” she said. “It hasn’t gone away completely or anything, and I transferred a lot of it over to the main record.” It feels, particularly, that the emancipatory urge of punk’s female energy stayed with her: that which infuses records by The Slits, Liliput, and X-Ray Spex, for example. Or, as Charli bluntly put it, “I wrote this record for girls, and for everyone on the planet with a pussy.”

Boom Clap, released in the middle of 2014 as part of the soundtrack to The Fault In Our Stars, was the first indication of where Charli’s head was at. She and her co-writer Patrik Berger were particularly influenced by early-80s pop, such as Bow Wow Wow, for this one. Those kinds of songs, said Charli, had “dumb, hooky, shouty choruses. They’re all sort of childlike. So we wanted to make a song like that.” Emerging as one of the best Charli XCX songs to date, Boom Clap was her first solo Top 10 hit in the UK and US – and it eventually sold over three million in the US alone. Proving Charli’s star quality, as well as her chops as a writer, it was the best possible omen for her second album.

“If men can sexualise women in music, why can’t women talk about their own bodies like that?”

The guiding star for Charli as she was writing Sucker was that it should be an album that 14-year-old girls could get obsessed with – and the kind of record she herself would have been obsessed with at that age. This says so much about Charli XCX. While she’s tied in to the more avant-garde and experimental side of modern electronic music, she doesn’t let it overwhelm her pop sensibilities. She respects pop music for what it is, and knows she can do it better than almost anyone out there.

So it was for Sucker. An album of female solidarity, of self-love and self-esteem, of empowerment, it’s bursting its stitches with ideas and enthusiasm. Need Ur Luv (which Charli still thinks is “a fucking anthem”) has a fantastic girl-group sensibility to it, a pastiche-cum-homage in the style of Madonna’s True Blue. Body Of My Own, a real highlight, is about the joys of masturbation. Charli says it stemmed from ideas of reclamation and pride. “I think that if men can sexualise women in music and talk about the female form and female bodies as a sexual thing, then why can’t women talk about their own bodies like that?” The whole album is infused with joy in the self.

“This feels right, everything about it feels perfect”

Well, there is something on Sucker that doesn’t bring Charli joy: “There’s only one song in my life that I didn’t feel good about when I was making it,” she reflected in 2021. “All [my] other songs – love. Feel great about them.” Charli revealed she was thinking about Break The Rules – a song she came up with at a writing camp. “I wrote it and I was like, whoever ends up singing this song is so fucking stupid. And then…. It was me!”

Released on 15 December 2014, Sucker brought Charli XCX plenty of great reviews and strong sales. “This feels right, everything about it feels perfect,” she said, riding her confidence in a 2014 interview. But, for an impatient artist such as Charli, it perhaps wasn’t surprising that her feelings toward the album cooled shortly afterwards.

“When I was making Sucker, I felt great,” she reflected in 2021. “[But] I think I went through a phase in life where I was quite ‘anti’ that album, just because the sonic decisions I made quite close after that record were so extremely different.” Charli was speaking about her next release, the abrasive Vroom Vroom EP, a harsher and less commercial collaboration with the much-missed artist SOPHIE. Vroom Vroom held onto pop with its fingernails – it was glitchy and hands-off where Sucker had been amiable and inviting.

Yet, enough time has passed now for Charli to feel proud of her second album. “Now that I have sat with it, and had my little bitch about it, I feel good about Sucker,” she said in 2021. As she should. It’s an exciting, creative journey of a restless spirit, and a benchmark of modern pop.

Find out what ‘Sucker’ tracks rank among the best Charli XCX songs.