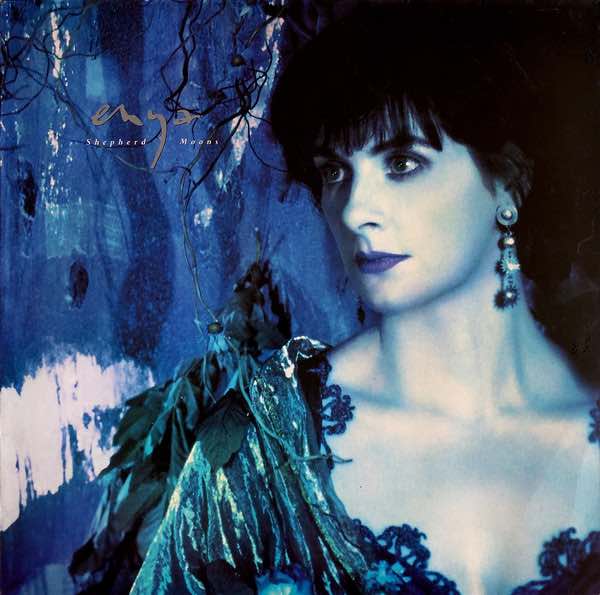 With astral influences and layers of vocals, Enya’s ‘Shepherd Moons’ album turned the tide and swept audiences along with a New Age classic.

Following the huge success of Enya’s second album, Watermark, and its breakthrough single, Orinoco Flow, in 1988, the Irish vocalist and songwriter found herself selling four million records worldwide. Such a winning formula of Celtic-inspired ambient pop was a tough act to follow, but Enya’s third album, Shepherd Moons, emerged as a labour of love, once again mixing lyricist Roma Ryan’s mystic poetry with producer Nicky Ryan’s affection for Beach Boys-inspired harmonies. No doubt aware of the commercial pressures, but also keen to stay true to her artistic vision, Enya had no way of knowing just how successful her follow-up would become. The fate of Shepherd Moons was, however, written in the stars.

“The world had not known, but all the time they were there, working tirelessly”

After exhaustive work in Dublin’s Aigle and London’s Sarm Studios, it took three years before Enya was finally ready to bless her audience with new music. Caribbean Blue, the lead single from Shepherd Moons, was released in October 1991 and once again charmed listeners eager for more of her idiosyncratic style of New Age Pop. With Enya’s vocals aerating around a dreamy waltz-like rhythm, the single peaked at No.8 in the UK, aided by a colourfully arty music video.

Inspired by the artist Maxfield Parrish, Enya wore long seahorse earrings in the clip and immersed herself in neo-classical imagery. “There were ten artists who had worked three weeks painting every second frame to give this effect of paintings coming alive,” she said. The animation perfectly captured the essence of the song’s message: “The song itself is about a journey through a very beautiful paradise land,” the singer added.

Shepherd Moons itself followed on 4 November 1991, opening with a gentle choral introduction that fills listeners’ ears like chants in a monastery and leads to the soothing piano instrumental of the album’s title track. The record’s celestial title came from a Voyager shuttle discovery – after beaming back images from space of two moons near Saturn protecting the planet’s rings, lyricist Roma Ryan poetically interpreted them as shepherds. “The world had not known, but all the time they were there, working tirelessly,” Ryan said.

“The lyrics talked about the trouble in the world, the strife, the turmoil”

A recording of a 250-year-old religious hymn, the sparse and seraphic How Can I Keep From Singing?, lends a touch of a holy reverence to a song about being rendered mute by the troubles of the world. “I felt the melody was very beautiful, and the lyrics were very strong,” Enya told the Melbourne, Australia-based broadcaster 3LO Radio. “They talked about the trouble in the world, the strife, the turmoil.” Released as Shepherd Moon’s second single, it reached No.19 in the UK.

Elsewhere on the album, the enchanting and otherworldly Ebudæ – based on a Latin name for the Hebrides – layers Enya’s Scotch Gaelic vocals, swaying like a magic mist. Throughout Shepherd Moons, care and attention is given to the singer’s calming and radiant voice – so much so, she recorded over hundreds of vocal tracks for Angeles. “With the voices, I sing it all in real time and emotionally – this can be quite draining,” Enya told Canadian TV’s MuchMusic channel. “I sung 500 times because I got so involved with the melody.” Soon, the album gives way to the lulling piano tones of the instrumental No Holly For Miss Quinn, named after a story by the English novelist Miss Read.

Released as Shepherd Moons’ third single, Book Of Days was first recorded as an instrumental for Ron Howard’s movie Far And Away, starring Tom Cruise and Nicole Kidman. With its upbeat swell of ambient beauty, the new lyrics, added by Roma Ryan, were inspired by ancient diary entries and evoked what Ryan felt were “personal histories of great loves, of journeys exotic and wonderful, of loss, fear and tragedy, of dreams and simple wishes”. One of the best Enya songs of all time, this blissful ethereal pop ballad scored Enya yet another hit single, climbing to No.10 in the UK.

Much like past-life regression, the song Evacuee evokes 40s Britain, thanks to Steve Sidwell’s mournful brass arrangement and a mysterious aria drawn from the ether. “This is based in London in the Blitz during the war,” Enya said. “It’s about this little girl at the train station saying goodbye and waiting until it’s all over.” The cinematic feel continues on the divine instrumental Lothlórien, a song inspired by JRR Tolkien’s The Lord Of The Rings. It was no surprise when, a decade later, Enya was invited to contribute another ode to Middle Earth to the soundtrack of Peter Jackson’s cinematic adaptation The Fellowship Of The Ring.

The final single to be released from Shepherd Moons was Marble Halls, a cover of a song written by Irish composer Michael William Balfe that Enya had heard in her favourite opera, The Bohemian Girl. “I felt it was a challenge to sing it, as it had only been sung by an opera singer,” Enya remembers. The single remains a pleasing and tranquil showcase of the singer’s inimitable voice.

Amid the meditative aura of After Ventus, Enya’s blissful humming continues to beguile, leading us to Shepherd Moons’ final track, Smaointe…, which was originally released as the B-side to Orinoco Flow. Comforting and elysian, it was inspired by a Maragellan graveyard where Enya’s grandparents were buried. “The Gaelic song about my grandparents is one of the best things I ever did,” Enya said in a 1988 interview, before she re-recorded the song for Shepherd Moons. The sombre closer inspires awe by evoking the heavenly sounds of ancestral voices drifting in from Mag Mell, the Celtic otherworld. It’s a poignant end to a masterclass in New Age pop.

“Our force is our peculiarity, and we have to keep it at any cost”

Continuing Enya’s reign as a peerless pop presence, the commercial success of Shepherd Moons surpassed even that of Watermark, going on to sell 13 million copies worldwide. In 1993, the Donegal-born singer won a Grammy Award for Best New Age Album, establishing her as Ireland’s most successful pop export.

With Shepherd Moons’ majestic blend of rapturous choral arrangements and New Age hymns, Enya had placed herself at the forefront of a refreshingly unique style of music she alone had perfected and popularised. There was – and still is – no one else quite like her. “Our force is our peculiarity,” she said, “and we have to keep it at any cost.” With Shepherd Moons, there is no doubting how successfully she has done that.

Buy Enya vinyl and more at the Dig! store.