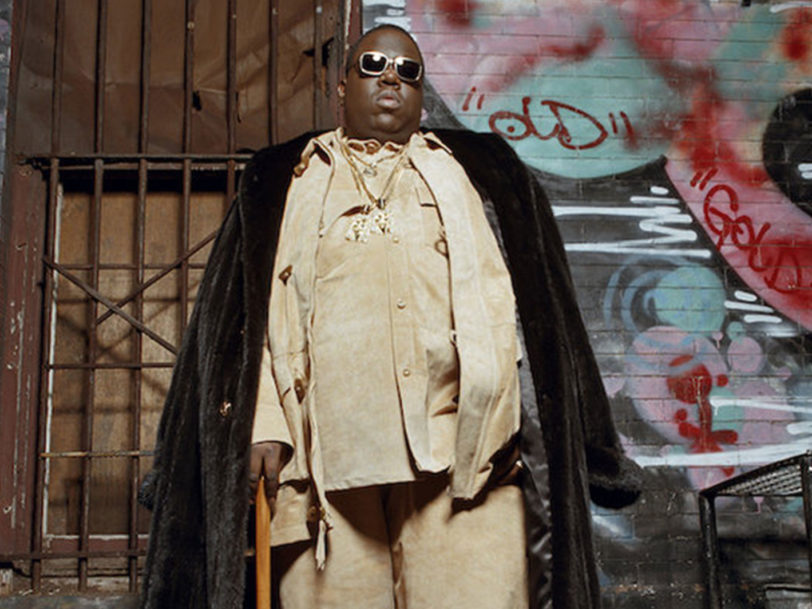 From sampling his voice to interpolating his flow, these Notorious B.I.G. tributes show why the late MC remains hip-hop’s finest.

Christopher Wallace, known as Biggie, Biggie Smalls or, most famously, The Notorious B.I.G., is widely regarded as one of the – if not the – best rapper of all time. He became a figurehead of the East Coast hip-hop scene in the 90s, after the release of his debut album, Ready To Die, before being tragically killed in 1997. In the years following his death he has been referenced, sampled, interpolated and rapped about countless times in hip-hop. To show the impact that Biggie has had on modern hip-hop, we’ve compiled ten of the best, most creative Notorious B.I.G. tributes that 21st-century rappers have paid to the iconic MC.

It might be a surprise to see this song featured on our list of Notorious B.I.G. tributes, but Wiz Khalifa includes a subtle nod to Biggie in one of the lyrics on this 2015 track. In the opening bars of his first verse, he raps, “Damn, who knew?/All the planes we flew/Good thing we been through,” interpolating a lyric from Biggie’s 1997 track Long Kiss Goodnight: “Move from BK to New Jeruz/Thinkin’ ’bout all the planes we flew, bitches, we ran through.”

The context of both tracks are widely different, with Wiz’s single memorialising the death of the Fast & Furious actor Paul Walker, while Biggie’s track was a direct diss at West Coast rapper Tupac Shakur. Even though Khalifa’s reference is small, it serves as a great example of the impact that Biggie has had on modern music. Artists still sample, reference and interpolate the classic rap icon to pay homage and show respect.

Travis Scott’s single SICKO MODE, from his third studio album, Astroworld, featured an iconic verse from Drake, but also lifted an even more iconic sample from Notorious B.I.G., which might have slipped under some listeners’ radars. Travis raps in his first verse, “This shit way too big/When we pull up, give me the loot,” before Biggie can be heard ad lobbing “Gimme the loot!” from the Ready To Die of the same name. Biggie isn’t the only rapper Scott pays tribute to on the track, as the bridge also samples Houston native Big Hawk, a rapper from the Screwed Up Click hip-hop collective who was murdered in 2006.

When modern hip-hop legends Kanye West and Jay-Z came together for their collaborative record, Watch The Throne, they discovered one of the most creative Notorious B.I.G. tribute. Jay-Z and Kanye expertly exchange bars throughout the album, but on the track Ni__as In Paris, Jay-Z references one of Biggie’s most famous lines, originally from his feature on the Puff Daddy track Victory. On the 1998 song, Biggie raps, “I perform like Mike/Anyone – Tyson, Jordan, Jackson,” which Jay-Z interpolates on his 2011 verse, rapping “Psycho: I’m liable to go Michael, take your pick/Jackson, Tyson, Jordan, Game 6.”

7: Logic: No Biggie (samples ‘Kick in the Door)

Maryland rapper Logic pays tribute to The Notorious B.I.G. on his 2012 mixtape track No Biggie, rapping over the instrumental to Biggie’s track Kick In The Door. On Logic’s 2020 album, No Pressure, he references this classic track once more, rapping on GP4, “Like track four, Kick In The Door by Notorious B.I.G./Don’t believe me, look that shit up, I promise you’ll find the key/To that punchline,” revealing that his tribute on the track No Biggie wasn’t just through the bars he rapped, but also the track’s placement in the mixtape, with both songs being placed fourth on their respective releases.

Joey Bada$$ has made no shortage of Notorious B.I.G. tributes throughout his career, among them notable interpolations from 1994’s Machine Gun Funk on his 2014 single Christ Conscious. On the track King Of The Jungle, Joey Bada$$ pays direct tribute to the legendary New York rapper. The single was released for free on SoundCloud on the 21st anniversary of Biggie’s death, it samples a vocal clip from Biggie’s verse on Junior M.A.F.I.A.’s single Gettin’ Money (The Get Money Remix). As well as sampling Big’s vocals, Joey Bada$$ makes reference to the rapper throughout the track, with bars like “And I bought tracks with the late, great Christopher Wallace/I’m a hip-hop scholar, graduated with the young God honours/And the wisdom and the knowledge from all of my forefathers/I pay homage, only right I keep this shit honest.”

This list of Notorious B.I.G. tributes could have easily focused just on the countless times that Jay-Z has collaborated with, sampled, referenced and interpolated his mentor throughout his career – it’s happened a lot! On Jay’-Z’s 2017 album, 4:44, the track Marcy Me pays homage to Biggie, opening with a spin on his 1994 track Unbelievable. Biggie originally rapped, “Live from Bedford-Stuyvesant, the livest one/Representing BK to the fullest/Gats I pull it/Bastards duckin’ when B.I.G. be bucking/Chickenheads be clucking in my back room, fucking,” while Jay raps “Live from Bedford-Stuyvesant/The Livest one representin’ BK to the fullest/Bastards duckin’ when Hov be buckin’/Chickenheads be cluckin’.” Even earlier in Jay’s career, on The Black Album, he referenced Biggie on the track What More Can I Say, directly quoting the iconic rapper: “So them rings and things you sing about, bring ’em out/It’s hard to yell when the barrel’s in your mouth” – bars originally said by Biggie on his collaboration with Tracey Lee, Keep Your Hands High.

On Villuminati, the opening track of J. Cole’s sophomore studio album, Born Sinner, you can hear Biggie Smalls’ booming voice on the chorus, spitting the lyrics, “Born sinner, the opposite of a winner,” and, later, “Now I’m in the limelight ’cause I rhyme tight/Time to get paid, blow up like the World Trade.” These samples are from one of the Notorious B.I.G.’s most well-known tracks, Juicy: the first single from Biggie’s debut studio album. These bars directly inspired Cole’s album title, and are repeated in all the track’s choruses throughout the track, highlighting the inspiration that the NYC rap heavyweight had upon J. Cole.

Nicki Minaj drops one of the best Notorious B.I.G. tributes on her 2018 track Barbie Dreams, as she raps over the instrumental of Biggie’s 1994 track Just Playing (Dreams). Both MCs are known for jokingly rapping about other celebrities, with Big spitting about R&B stars he’s attracted to, while Nicki playfully disses a number of her male peers. After the release of Barbie Dreams, Minaj took to Twitter to explain the track and further pay homage to Biggie: “I only mentioned people in #BarbieDreams that I f*** wit. This isn’t a diss. Yikes. This is culture, this is BIGGIE!!!!! New York!!!! This is FUN. Light hearted fun FUN.”

When Lin-Manuel Miranda first premiered his musical Hamilton in 2015, his hip-hop homages impressed theatre-goers with their interpolations of iconic rap tracks into musical-theatre numbers. One of the most inventive was the song Ten Duel Commandments, which directly interpolated Biggie’s Ten Crack Commandments. The Hamilton track breaks down the ten rules to follow when entering an 18th-century duel; in his original, The Notorious B.I.G. breaks down ten steps to successfully hustling drugs. The context of the two tracks couldn’t be more different, but both work perfectly.

Meek Mill’s collaboration track with Jay-Z and Rick Ross, What’s Free, is one of the more obvious Notorious B.I.G. tributes. Meek’s 2018 song directly samples Biggie’s 1997 track What’s Beef?, in which the late rapper directly addressed fed up he was with rappers exchanging insults in on record, but not acting the same way in real life. On What’s Free Meek Mill makes use of the same sample as Biggie, the 70s R&B track Close To You, by Richard Evans, in near-identical fashion to create the song’s beat. Over the chorus, Meek interpolates Biggie’s flow, but changes the bars to rap about what it means to be free, touching on his 2017 stint in prison.