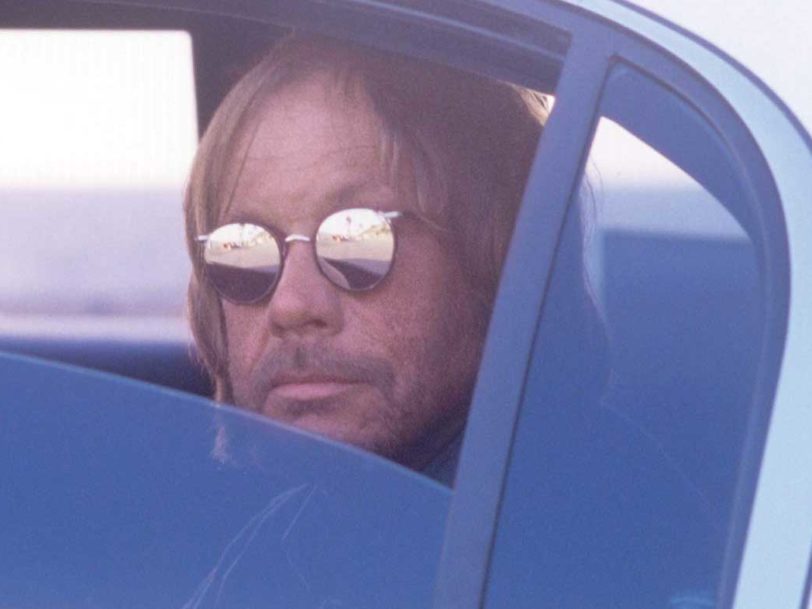 Warren Zevon was unquestionably one of the best literary songwriters in music. The Chicago-born musician said he grew up “reading every word of Norman Mailer and John Updike”, and loved the company of writers. Author Mitch Albom, who co-wrote the song Hit Somebody! (The Hockey Song) with Zevon for the 2002 album My Ride’s Here, said that the musician’s apartment “was high walls of books”, including those of Kurt Vonnegut and Franz Kafka.

Listen to My Ride’s Here here.

“I loved that Warren loved it”

Albom, who was in the process of writing the global bestseller The Five People You Meet In Heaven at the time he joined forces with Zevon, had a background as a sports journalist, and sometimes jammed with the songwriter. “Warren was always asking me to write him a sports song. ‘Make it hockey,’ he’d say. ‘Nobody sings about hockey.’ So one night we sat in the basement with a guitar and a piano and a case of Mountain Dew, Warren’s favourite, and in three hours, we put music to lyrics I had written about a misunderstood hockey goon. Warren loved it. And I loved that Warren loved it.”

The witty lyrics, about a Canadian farm boy who grows up to be a star in the violent world of hockey, featured the voice of television host David Letterman as an obnoxious fan who keeps yelling “Hit somebody!” Paul Shaffer, the Canadian multi-instrumentalist who served as musical director on Late Night With David Letterman, played organ on the track.

My Ride’s Here, which was released on 7 May 2002 by Artemis Records, also features collaborations between Zevon and novelist Carl Hiaasen, poet Paul Muldoon and gonzo journalist Hunter S Thompson.

Hiaasen, a friend of Zevon, co-wrote Basket Case, an offbeat love song about a girlfriend with mental-health problems (“She’s manic-depressive and schizoid, too/The friskiest psycho that I ever knew”), after suggesting to the musician that they based a song on a novel he was writing in 2001. “Warren came up with this great guitar stuff and we did lyrics together, faxing lyrics back and forth,” said Hiaasen. The powerful drumming on the track came from New Zealander Anton Fig, another member of Letterman’s studio band.

“I was thrust into the position of travel agent for death”

Two of the songs on the album were collaborations with Irish Pulitzer Prize-winning poet Muldoon, who later became Professor Of Poetry at Oxford University. The poet had originally written a fan letter to Zevon, and had heard nothing for more than a year before receiving a phone call out of the blue, suggesting that they wrote together. Zevon, who was 55 at the time My Ride’s Here was made, was suffering from cancer and thinking about his own mortality.

“I keep asking myself how I suddenly was thrust into the position of travel agent for death,” Zevon said after composing the album’s moving, sardonic title track with Muldoon. Standing as one of the best Warren Zevon songs, it references John Wayne, Jesus, Charlton Heston and the 3:10 to Yuma train, and was a favourite of Bruce Springsteen, who recorded a terrific version of it on the 2004 tribute album Enjoy Every Sandwich: The Songs Of Warren Zevon, released a year after Zevon’s death.

Muldoon and Zevon also jointly penned the Irish folk song Macgillicuddy’s Reeks, which featured some lovely fiddle and tin-whistle playing from Katy Salvidge, a Bristol-born musician who had played the penny whistle on the Oscar-nominated score for the 1997 movie Good Will Hunting.

“He agonised over his lyrics”

Zevon dropped his voice to a low register to sing You’re A Whole Different Person When You’re Scared, a song overflowing with paranoia, which was penned with his friend Hunter S Thompson. The pair shared a love of dark humour. “Warren was close to Thompson, and their work shared a certain twisted energy,” said Hiaasen. “But Warren was very much his own writer, and he was more disciplined than Hunter. Warren was meticulous. Even when he was young and high as a kite, he agonised over his lyrics.”

The sardonic track Genius, co-written with bass player Larry Klein, was the most orchestrated song on the album, featuring a string quartet (Evan Wilson on viola, Charlie Bisharat and Joel Derouin on violins, and Larry Corbett on cello), while Laissez-Moi Tranquille (translating as “Leave Me Alone” in English) was a cover version of a 1960 song by French actor and singer Serge Gainsbourg, whose decadent lifestyle and provocative, tender lyrics appealed to Zevon. Elsewhere, the melodic I Have To Leave – the shortest song on the album, at just three minutes – was written by Zevon’s high-school friend Dan McFarland. The caustic Sacrificial Lambs was also written with Klein.

My Ride’s Here was produced by Warren himself – his first solo production since 1995’s Mutineer – and is full of diverse styles. Zevon’s only solo composition on the album was Lord Byron’s Luggage. The song prompted an academic study of Zevon’s work, called Lord Byron’s Luggage: Warren Zevon And The Redefinition Of Literature Rock. Zevon’s gift for language and wordplay was always a match for his writer friends, and My Ride’s Here confirmed his status as a true literary songwriter.

Check out our best Warren Zevon songs and find out which My Ride’s Here track made the trip.