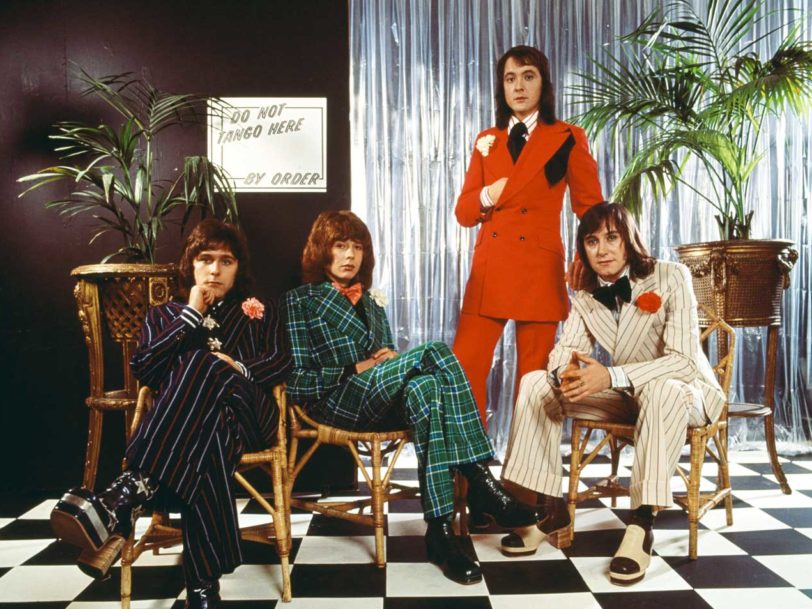 A humorous look at Christmas isolation, Mud’s Lonely This Christmas has become a go-to staple for the broken-hearted during the holidays.

A chorus of mellow “Ooo”s and “Bom”s opens the forlorn festivity of Mud’s 1974 Christmas No.1 in a lovely bluesy fashion. Despite being released in 1974, Lonely This Christmas instantly taps into 50s nostalgia – an era of sock-hops, diners and brightly coloured Cadillacs. One of the best Christmas songs of any era, it’s guaranteed to get everyone waving their arms slowly in the air – and also, perhaps, to soundtrack the holiday season for a few unfortunate souls.

That Lonely This Christmas is often mistaken for an Elvis Presley song is no accident. Mud frontman Les Gray was a huge Elvis fan, known for his eerily accurate impersonation, and the track gave him a chance to pay tribute to The King. Both the song’s video and multiple live performances saw the glam rock band don their best Elvis impersonator outfits – we’re talking big collars and glitter aplenty – to belt out this festive number, but though the homage was intentional, it also caused mass confusion, with many people still calling Lonely This Christmas one of Elvis’ greatest Christmas songs.

Lonely This Christmas was a significant shift in style for Mud, whose glam rock origins were pushed aside in favour of a more relaxed approach. Written and produced by the legendary duo Chinnichap – otherwise known as songwriting and production team Nicky Chinn and Mike Chapman – Lonely This Christmas was not only Chinnichap’s third No.1 single of 1974, it was one of dozens of Top 40 hits the duo wrote and produced between 1970 and 1978.

Mud released Lonely This Christmas during a golden age for Christmas singles, and it became their second chart-topping hit, holding the UK No.1 spot for four weeks. The song’s premise is simple: the protagonist is devastated that he won’t be able to see the girl he loves on Christmas, and conjures all the sad festive imagery you can imagine – unlit Christmas trees, enough tears to “melt the snow”, the works. Even when he croons about the good times they’ve shared in the past, it only further highlights her absence this year. It’s miserable and poignant, but mainly cheesy, which is what makes it so endearing.

An unusual avenue for a Christmas song

Ray Styles’ sturdy bassline serves as the melancholic backbone that carries the song, while the subtle instrumentation that surrounds it provides some of Lonely This Christmas’ standout moments. But it’s not just the instrumentation that makes the song special. The drowsy doo-wop vocals create an atmosphere of their own. Wistful and longing, they guide us both in and out of the track, ensuring us that the mood will most definitely not be lifted for our protagonist.

“You remember last year, when you and I were together?” Gray asks on perhaps the song’s most standout feature – its sultry, smooth monologue delivered from the depths of despair. An unusual avenue for a Christmas song to take, it was also personal and sorrowful – and Mud pulled it off.

Lonely This Christmas wasn’t just iconic in terms of sound, but also in terms of presentation. On 25 December 1974, Top Of The Pops aired a fantastic rendition of the song, as Mud took centre-stage, surrounded by ladders, while BBC employees hid above, throwing huge amounts of fake snow over the group. Les Gray sang to both the camera and the ventriloquist dummy on his knee, with the dummy taking over for the song’s monologue. As the song finished, it leant into the microphone and said those famous final words, “Merry Christmas, darlin’, wherever you are,” and the remaining contents of the buckets were tipped onto the group.

The Christmas anthem of 2020

Decades after its original release, Lonely This Christmas has become a go-to holiday song – and, in 2020, it’s more relevant than ever. Suddenly, not only does it represent one man missing his lover, it also speaks for people all over the world, unsure if they’ll be doomed to spend their festivities on a dreaded Zoom call. The song assures listeners they’re not alone; whenever they want to wallow in their feelings, they can always turn to Mud.

Not only did the group prematurely create the festive anthem for 2020, they also offered a light-hearted look at heartbreak in the holiday season. Having inspired covers from the likes of The Growlers and KT Tunstall, it’s clear that Lonely This Christmas has touched many – and will continue to do so. Firmly cementing its place in pop culture, it will always be spun on a few lonesome turntables each Christmas.

Check out our best Christmas songs of all time