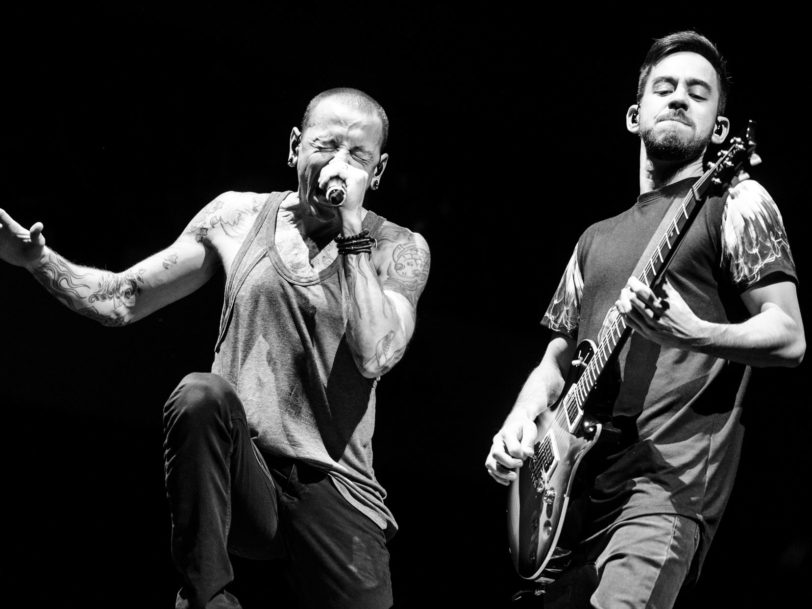 © Wedding Studio by Hohnjec
In Depth

With ‘Hybrid Theory’, Linkin Park unleashed a game-changing album that became the highest-selling debut since ‘Appetite For Destruction’.

Linkin Park’s debut album, Hybrid Theory, is a revolutionary album that crafted a furious blend of hip-hop, rock, metal and electronica. Originally released on 24 October 2000, it remains one of the most influential records of its era, inspiring countless artists, such as Bring Me The Horizon, BROCKHAMPTON and twenty one pilots.

Hybrid Theory’s fusion of genres, raw emotion and hard-hitting production would dominate the nu metal millennium – and rightly so. However, the iconic album – and group – would be years in the making, with Linkin Park having to fight for what they believed in, in order to produce the legendary album.

From Xero to heroes

The future Linkin Park were originally a group called Xero, featuring rapper Mike Shinoa, singer Mark Wakefield, guitarist Brad Delson, bassist Dave Farrell and DJ Joe Hahn. Having formed in the mid-90s, they landed a publishing deal with Zomba Music Publishing, where Delson was an intern, but a lack of progression spurred Mark Wakefield to leave and pursue other projects. In need of a singer, the group found Chester Bennington through an attorney friend of Jeff Blue’s, Zomba’s then Vice President.

After receiving a Xero demo tape, Bennington, formerly the lead singer of grunge band Grey Daze, responded with an audition tape that would leave Blue and the group utterly floored. The singer was ready to join forces and bring the band to the next level. Following Bennington’s arrival, Xero would become Hybrid Theory before evolving into Linkin Park.

A series of rejections found the group struggling to gain traction, but Linkin Park finally signed to Warner Records in 1999, with the aid of Jeff Blue, who had moved over to become the label’s Vice President. Writing new material and reworking older songs, the group were ready to unleash their debut album.

“We were really trying to mash up styles”

Linkin Park’s genre-mashing style contrasted from other nu metal artists at the time, such as Korn and Limp Bizkit – and they knew it. The group were constantly told to pursue other directions or stick to one genre, but that’s not what Hybrid Theory was about. Rather, the group doubled down on creating something new by marrying multiple genres and inspirations. Their determination paid off.

It was clear from the get-go that Linkin Park’s aim to forge genre-fluid music that spoke to real issues would generate mass appeal. One Step Closer, released as the album’s first single, on 28 September, soon dominated radio and music television in the UK. Giving a voice to the teens of the time, it was the perfect introduction to Hybrid Theory: ferocious music with reflective lyrics that helped the group foster an intimate relationship with their fans. Embracing vulnerability in order to closely relate to the listener, the band took inspiration from Chester Bennington’s life for songs that dealt with alcohol and drug abuse (Crawling), childhood trauma (Runaway) and strained relationships (A Place For My Head).

Released as Hybrid Theory’s second single, Crawling would earn Linkin Park their first Grammy Award, for Best Hard Rock Performance. However, it was the album’s third single, In The End, that propelled the group to international acclaim. Brilliantly conceived to incorporate emotive piano, rap verses and a belting rock chorus, it was a modern-day rock-rap anthem that peaked at No.2 on the Billboard Hot 100, setting Hybrid Theory up to become the biggest-selling album of 2001 and the highest-selling debut album since Guns N’ Roses’ 1987 album, Appetite For Destruction. The song has since solidified itself as a modern hard rock classic that not only defined the genre for a new millennium, but spread a message of hope to those feeling alone.

“We can take chances we want to take”

There is no denying the impact of Linkin Park and Hybrid Theory. The album aided the accelerated genre fluidity in listening habits of a generation that typically would have either been into rock, rap or pop music. But with songs like Papercut, which opened Hybrid Theory with a breakbeat before erupting into heavily distorted guitar riffs and rap vocals, the group showed listeners that there was nothing to stop disparate genres from co-existing.

“Papercut at the time was one of my favourites,” DJ Joe Hahn recalled. “We were really trying to mash up styles, and I think we did that pretty successfully. The album’s called Hybrid Theory because it represents that ideal.”

Released in 2002, Reanimation, Linkin Park’s first remix album, would feature contributions from Alchemist, DJ Babu, Black Thought and other artists that would go on to inspire the group’s signature sound while also showing off Linkin Park’s appeal to a vast and varied audience. Fast-forward to the 2020s and we find rapper Denzel Curry continuing on a similar mission, while no one bats an eyelid at Travis Scott and Black Sabbath’s Ozzy Osbourne appearing together on a Post Malone track.

“We can stay true to who we are”

Chester Bennington took his own life in the summer of 2017. His legacy, however, lives on. Most nu metal bands at the time sang of general teenage angst and the opposite sex, whereas Bennington left himself open, helping listeners to embrace their own flaws and insecurities. It’s a message that set Linkin Park apart from the likes of Papa Roach and Limp Bizkit.

“That record means a lot,” Bennington said of Hybrid Theory. “It’s allowed us to really know that we can stay true to who we are, we can fight for what we want and we can take chances we want to take.”

In fighting for what they believed in, Linkin Park created a 21st-century classic. Two decades on from its original release, Hybrid Theory remains one of the most inspirational debut albums of all time.