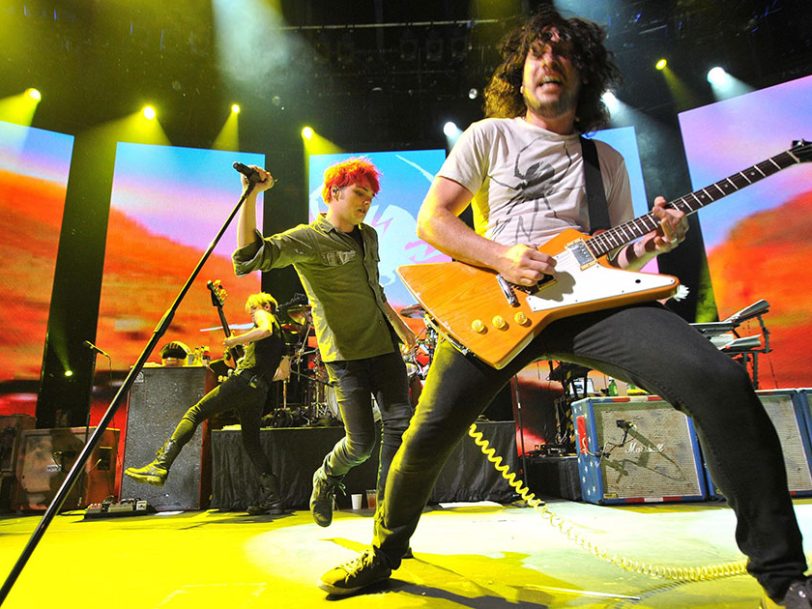 ‘I Brought You My Bullets, You Brought Me Your Love’: How My Chemical Romance Shot To Supremacy

My Chemical Romance’s dark debut album, ‘I Brought You My Bullets, You Brought Me Your Love’ took pop-punk and emo in a grittier direction.

My Chemical Romance frontman Gerard Way was 24 years old when terrorists attacked the World Trade Center, in New York City, on 11 September 2001. The incident understandably had a profound effect on the then aspiring comic-book artist. He had been working as an intern at Cartoon Network in the city that devastating day but, in its aftermath, the New Jersey native began to question what he was doing with his life. As he described it to Spin magazine in 2005, “I literally said to myself, ‘Fuck art. I’ve gotta get out of the basement. I’ve gotta see the world. I’ve gotta make a difference.’” And so My Chemical Romance was born, soon to be followed by their dark, gritty debut album, I Brought You My Bullets, You Brought Me Your Love.

Listen to ‘I Brought You My Bullets, You Brought Me Your Love’ here.

An album as frenetic as the band’s own existence

As a means of processing what happened on 9/11, Way penned the lyrics to what would become Skylines and Turnstiles, the first ever song MCR would write together. The singer dropped any dreams he had of joining the ranks of the world’s best guitarists – he’d played the instrument since he was eight, but wasn’t very good at it – to focus on lyric-writing and singing. Within eight months of that fateful day, the former illustrator had teamed up with drummer Matt Pelissier, guitarist Ray Toro and his bass-playing younger brother, Mikey Way, and hammered out enough songs for what would become the group’s debut album.

A demo recorded in Pelissier’s attic was enough to impress Eyeball Records, through which My Chemical Romance met guitarist/vocalist Frank Iero, whose then band, Pencey Prep, had just split up. Days after recruiting their second axe-slinger, and with their line-up cemented, the fledgling MCR entered Nada Recording Studio, in the town of New Windsor, in Orange County, to hammer out 11 tracks with producer Geoff Rickley, from the band Thursday. It took MCR less than two weeks to complete the sessions and, two months later, on 23 July 2002, they unleashed I Brought You My Bullets, You Brought Me Your Love, an album every bit as frenetic and raw as the band’s own brief existence.

Opening the album, the gentle flamenco-style Romance (an acoustic piece of music of unknown origins thought to date back to the late 19th century) soon gives way to the goth-punk of Honey, This Mirror Isn’t Big Enough For The Two Of Us. Gerard Way maintains that MCR served as an outlet for his struggles with depression and various addictions to alcohol and prescription drugs, and the song’s opening lyric, “The amount of pills I’m taking counteracts the booze I’m drinking,” lays that philosophy bare and offers an insight to the poignant connection My Chemical Romance would later form with their legions of fans. This was dark music for lost souls, the subject matter of which hadn’t been explored since the grim days of grunge.

The alt-rock strum of Vampires Will Never Hurt You soon gives way to a frenetic raw energy representative of the band’s whirlwind existence and the urgency with which I Brought You My Bullets… was conceived. It’s here that we get a hint of Gerard Way’s alternate career in comics, and throughout the album there are references to the horror movies that the vocalist held dear. The dark balladry of Early Sunsets Over Monroeville, for instance, was directly influenced by the George A Romero zombie horror flick Dawn Of The Dead, with its lyrics directly referencing the film. MCR fans, however, had their own ideas about the album’s meaning.

A Molotov cocktail of unbridled energy and fearless urgency

Common themes running through the lyrics – predominantly love and death and occasionally going on the run – have led die-hard followers to believe that I Brought You My Bullets, You Brought Me Your Love is a concept album based on a Bonnie and Clyde-type relationship, with the couple eventually meeting their fate in a hail of bullets in the desert. Though this isn’t a theory the band have ever endorsed, the themes running through the album were revisited in its follow-up, Three Cheers For Sweet Revenge, which Gerard Way once described as a “pseudo-conceptual horror story”.

Whatever MCR’s debut album is or isn’t, the threads of chasing love and sometimes sabotaging it resonated with the emo-goth fraternity. A raw and scrappy amalgamation of all the band’s influences – which, beyond comic books and horror movies, include Misfits, Motörhead, The Cure, Queen, The Smashing Pumpkins, Minor Threat and Nirvana, among many others – it’s a chaotic mash-up of post-hardcore, gothic rock, punk and metal which would go on to inform the best My Chemical Romance songs.

Though it lacks the finesse, grandiosity and polish that time, experience and larger budgets would bring to the group’s later releases, I Brought You My Bullets, You Brought Me Your Love makes evident the plucky ambition and bold creativity at the heart of My Chemical Romance. The Molotov cocktail of influences that the band dared to throw into the mix were unlike anything anyone had tried before – or successfully replicated since. And the album’s lack of polish and perfection are exactly what make it so exciting: the unbridled energy and fearless urgency give MCR’s debut a large part of its charm. In an invigorating, 41-minute burst of youthful enthusiasm and wide-eyed ambition, My Chemical Romance were ready to take on the world.

Find out which ‘I Brought You My Bullets, You Brought Me Your Love’ tracks shot into our best My Chemical Romance songs.