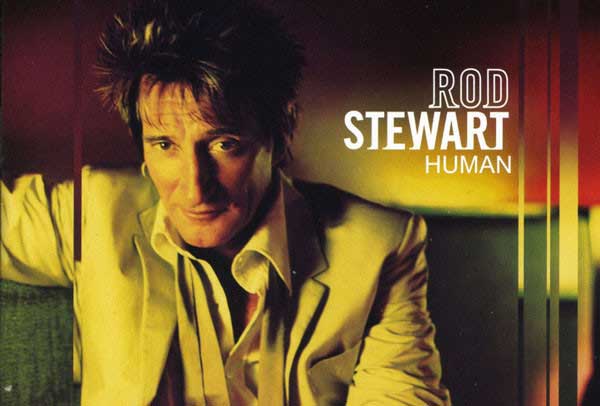 A mix of rock’n’roll glory days and contemporary R&B, Rod Stewart’s ‘Human’ album built a bridge to his next chapter.

Released on 12 March 2001, Rod Stewart’s Human album was a high-gloss affair. At 56 years of age and with 19 solo albums now behind him, it also marked a critical moment in his career: though Stewart used the album to remind fans of his rock’n’roll glory days, Human also set the stage for his golden years.

“My assumption was that I was completely finished”

At the start of the 21st century, the future looked uncertain for Stewart. Though a beloved rock veteran, his last hit, Forever Young, was more than a decade old, and the dry spell had led fans, critics and even Stewart himself to question his future. “Indeed, my assumption was that I was completely finished as a songwriter,” the London-based singer reflected in Rod: The Autobiography.

Yet Stewart’s career was built on changing his sound. After his mod-era 60s recordings and career-defining work with Faces in the early 70s, he found solo success with crossover hits like the disco-infused Do Ya Think I’m Sexy, in 1978, and the new wave-calibrated Young Turks in 1981. Continuing that tradition, Human – the first solo album on which Stewart doesn’t have a single songwriting credit – took a leap into the adult contemporary world.

To help round out its 11 songs, Atlantic Records enlisted an array of songwriters and producers, along with legendary guitarists Slash (Guns N’ Roses), Mark Knopfler and Jesse Johnson (The Time), to usher Stewart’s voice into the new millennium. Following in the footsteps of contemporary soul and R&B artists like TLC, Toni Braxton and Destiny’s Child, Human is no doubt a product of its era, and it lays its influences bare.

Take the opening title track. From the outset, the rhythm and tone set themselves apart from anything we’d previously heard from Stewart, but you don’t have to go far to find its inspiration. The orchestral plucks and synthesised beats feel radio-ready, recalling Destiny’s Child’s Bills, Bills, Bills, while the song’s refrain could very well be cut from the same cloth as Christina Aguilera’s Genie In A Bottle. When Slash’s guitar solo comes in, you find the soul-rock fusion that made Rob Thomas and Santana’s Smooth an instant success.

The album follows with Smitten, co-written by Macy Gray. Opening with a laidback keyboard progression and synthesised drum beat, it launches into a lush arrangement of strings and guitars. The song casts Stewart in the role of an unrequited lover, and it doesn’t take long to get to the point. That not-so-subtle build to the chorus echoes Gray’s breakout hit I Try, making it easy to see why she was brought on as a co-writer. It’s easily one of the catchiest hooks of the album.

Pairing Stewart with Scottish soul and jazz singer Helicopter Girl (Jackie Joyce) for a TLC-infused duet, Don’t Come Around Here is one of Human’s best moments. Joyce’s smoky voice works well with Stewart’s trademark rasp, as the two bounce off one another in a contemplative search for post-break-up answers. Displaying a different, more sophisticated Stewart, the song charted at No.30 in the US Adult Contemporary chart.

Standing apart from the primarily downtempo R&B and soul-infused arrangements on the rest of Human, I Can’t Deny It finds Stewart on more familiar ground. A bit more uptempo and commercial, it features a classic rock line-up – live drums, bass and rhythmic piano, plus a flurry of electric guitars – and is backed by a choir, allowing Stewart to take centre stage in the way that he’s so accustomed to. Though its lyrics are standard boy-girl rock fare (“So, girl, let’s ride it/Get excited/I can’t deny it/When it feels this good”), they are carried by the energy of the track and work well as a vehicle for Stewart’s voice. Unsurprisingly, I Can’t Deny It was the most successful single from Human, charting at No.30 in the US Adult Contemporary chart and No.26 in the UK singles chart.

A bridge to the next chapter

Though Human went Top 10 in the UK, peaking at No.9 (it stalled at No.50 in the US), Stewart later reflected that the album “seemed to go down about as well as a wart in a swimming pool”. But Human can’t be measured by its commercial success alone. It reveals an artist in transit, and with that reinvention Stewart builds a bridge to the next chapter of his career.

That chapter – which included thyroid cancer and surgery, and a rehabilitation that forced Stewart to relearn how to sing – became a grounding force. With it, Stewart brought all the perspective and personality of his entire career to a series of Great American Songbook albums, the highly successful passion project that saw him connect with a range of pop and jazz standards.

Human may have revealed his frailties, but it also ultimately spoke to Stewart’s resilience.