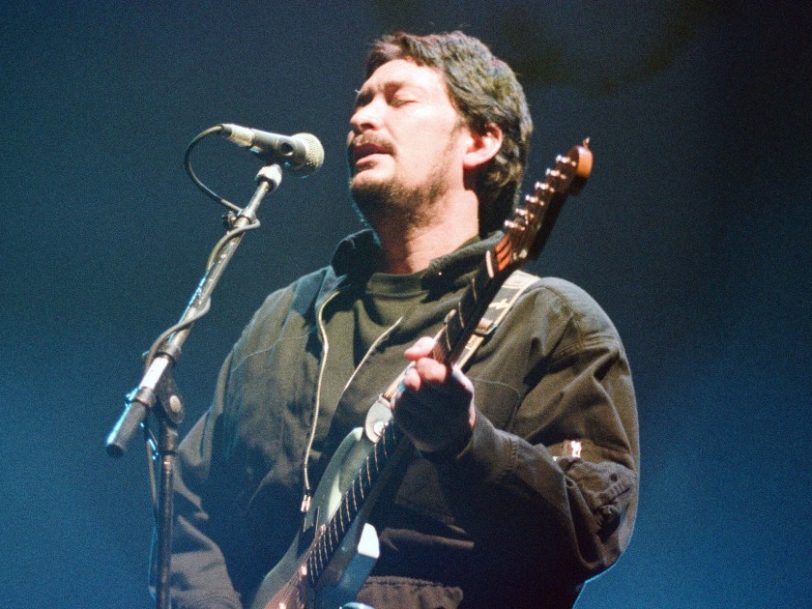 Percolating with creative energy, Chris Rea’s 13th album, Espresso Logic, was the happy by-product of a prolific series of recording sessions at The Mill Recording Studio, in South Norfolk. Continuing the Middlesbrough-born songwriter’s run of successful albums, the 1993 release offered up a carefree collection of leisurely blues jams with jazzy textures. With Rea’s rasping vocals on fine form, Espresso Logic swirls like crema in a demitasse cup and provides a stimulating kick from his bountiful discography.

“Somebody had mentioned people’s logic, and I just used poetic licence”

Rea was going through a hyper-productive spell at The Mill. As a matter of fact, releasing a new album so soon after his previous record, 1992’s God’s Great Banana Skin, came as something of a surprise to his record label. “It was never meant to be an album,” Rea said, recalling how the company agreed to release Espresso Logic the following autumn, on the condition that he slow down a little.

Released in October 1993, Espresso Logic’s lead single was the soft-rock stomper Julia, a song written about the singer’s four-year-old daughter, and one which still holds its own among the best Chris Rea songs. Just like Josephine before it, from his breakthrough album, Shamrock Diaries, Julia is a sunny and sprightly ode to fatherhood, simmering with Martin Ditcham’s upbeat drumming and Rea’s distinctive slide guitar work. The song peaked at No.18 in the UK and became Rea’s fourth hit to crack the Top 20.

In line with his relentless work rate, the parent album followed on 3 November 1993 in the UK (US fans could take a small breather, until the record’s stateside release, on 8 March 1994) and hit No.8 in his homeland. Its title was inspired by coffee culture and the cosmopolitan vibe of Italy, where Rea found himself watching TV and noticed how out-of-touch politicians were compared to his fellow caffeine-imbibers. “They had nothing in common with the dialogue of the folk in the bar,” Rea said. “Somebody had mentioned people’s logic, and I just used poetic licence and said, well, it’s ‘espresso logic’!”

“I just imagine that it’s the beginning of a movie”

Kicking off with its nearly seven-minute-long title track, it’s easy to get caught up Espresso Logic’s cinematic allure. From Davey Spillane’s uilleann pipes to Ditcham’s tribal throb, you can hear the influence of Western movie soundtracks on the album. “It’s like Sergio Leone on record,” Rea admitted. “I just imagine that it’s the beginning of a movie.” Since Rea was working on his own movie, La Passione, at the same time, it’s perhaps no surprise that Espresso Logic’s evocative mood reflected his desire to tackle more ambitious musical arrangements.

Recording Spillane’s contributions proved particularly challenging for audio engineer Stuart Epps. “I was wary because I hadn’t recorded uilleann pipes before,” he later said. As for Rea, he seemed to relish the experiment (“I like off-the-wall things that raise a smile”). Espresso Logic is not all tangled up in Spaghetti Westerns, however. Elsewhere, Rea’s love of sports racing surfaces on Soup Of The Day, a swipe at the “… thin around the waistline/Thin around the brain” types Rea encountered at motor-racing circuits. “They think they’re better than others because they’re wearing some Gucci thing,” he said.

During an interview on This Morning with presenters Richard Madeley and Judy Finnigan, Rea spoke candidly of his love of motor sports and mentioned that his record label had hired a touring car to promote the release of Espresso Logic. Later, Rea drove a Team Dynamics BMW 318i and participated in a race at Donington Park against his friend and Formula 1 driving legend Nigel Mansell. “I’m still really enjoying it,” Rea told Autosport, “but I wouldn’t like to be a proper modern racing driver.”

Despite Rea’s fondness for all things high-octane, Espresso Logic is a steady affair. Featuring slow-burning power ballads with earth-scorching solos (Red), blues set on cruise control (Between The Devil And The Deep Blue Sea), classical-inspired orchestral pop (Summer Love) and even spoken-word reverie (She Closed Her Eyes), the album would go on to sell 100,000 copies in the UK and was certified gold by the BPI.

Espresso Logic would also yield a further single, Johnny Needs A Fast Car, a mellow tribute to racing driver Johnny Herbert. “His career was snapped in two when he had an horrendous crash at Brands Hatch,” Rea said. “He was written off completely as lucky to be alive, may never walk again, will definitely never race.” Inspired by how Herbert had emerged from personal trauma to become the leader of Formula 1’s Lotus team, the song expressed Rea’s heartfelt admiration for the sportsman’s resilience.

In many ways, Espresso Logic’s cinematic sprawl hinted at where Rea would go next. La Passione would be released in 1996, along with its accompanying soundtrack. “I would love to make an album alongside a movie instead of pop videos,” he said in a 1993 interview with Rock World. “In fact that’s what we’re already doing for the next album.” As driven as ever, Rea was clearly in no mood to slow down as he sped off towards his next project.