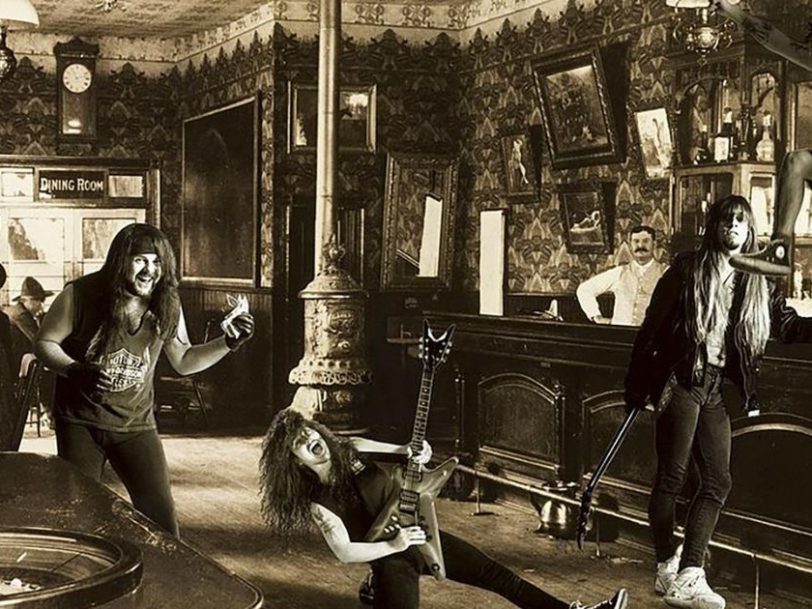 A clash of metal, thrash, hardcore and punk, ‘Cowboys From Hell’ was both a revamped Pantera’s statement of intent and a genre game-changer.

Many people – not least Pantera themselves – prefer to forget about the band’s glam-metal 80s era. Fortunately, towards the end of that decade, the Texan group began to draw from more influences than they could reasonably cram into their tiger-striped spandex and made a conscious decision to forge a less traditional path. If 1988’s Power Metal album – the first with new vocalist Phil Anselmo – stood as a bridge into a new era, then 1990’s Cowboys From Hell signified a full-blown rebirth. And, from the start, the band and the people around them knew something magical was about to happen.

Listen to ‘Cowboys From Hell’ here.

“We saw what our new songs were doing to people”

Terry Date was metal’s producer du jour, having worked with thrash mainstays Overkill and an upcoming band from his native Seattle called Soundgarden. As he recalled to Revolver magazine in 2014, “Pantera’s manager, Walter O’Brien, called me up and goes, ‘I’ve got this band. They could be the next Metallica.’ And I was like, ‘OK, that’s the 12th time I’ve heard that this week…’ I heard the demo, and it was really good, but it wasn’t until I met them that I realised that this was something special.”

Pantera themselves noticed the tides changing among their own fans, too. “We saw what our new songs were doing to people, to our crowd,” late drummer Vinnie Paul told Metal Hammer magazine in 2010. “It was driving people crazy. They couldn’t wait to hear us play Cowboys From Hell or anything off that record, even before we recorded it, so we knew we were onto something special.”

Pantera spent the latter half of the 80s hanging out with such bands as Slayer and Metallica, and these late-night jam sessions started to filter into their own music. Combine that with the heavy blues of early ZZ Top – woven into the fabric of

their native Texas – and these young metallers had concocted a sound that would reshape the metal landscape forever. Pantera added a fresh, streetwise swagger to traditional heavy metal and thrash riffs, with a dollop of punk attitude and the belligerence of hardcore, and wrapped it all in slab-heavy, blues-inspired grooves. This was heavy metal like no one had ever heard before.

“We used the first take. It’s full of energy and it’s very raw”

Opening Cowboys From Hell, the album’s title track was Pantera’s statement of intent (“We’re taking over this town”), guitarist “Dimebag” Darrell’s distinctive shred bursting into life like an attack of heavy artillery. A brutal cyclone riff pairs with a vicious double kick on Primal Concrete Sledge, while the demented stomp of Psycho Holiday and the galloping Heresy are an assault on the senses. But then Cemetery Gates offers a respite; rare was a band this savage who could pull off a haunting ballad. Perhaps they got away with it because the bridge and chorus segued into their now-trademark power-metal grooves. Nevertheless, among such aural barbarity it was a ballsy move, proving that Pantera had developed some serious songwriting nous.

Live favourite Domination’s whirlwind riff captured all the energy, intensity and determination of Pantera Mk II in its gloriously vigorous four minutes. And to keep the energy rampant and raw, the song was laid down in one take. “We wrote Domination in the practice studio,” Vinnie Paul admitted. “Some people think it says, ‘Art stinks like a motherfucker,’ in the beginning. Actually, it was me going, ‘First take like a motherfucker.’ It was the first time we were gonna actually lay it down after we’d been jamming on it. And we used the first take. It’s full of energy and it’s very raw.”

Shattered is rapid-fire thrash leading into the riff wizardry of Clash With Reality, followed by the brooding Medicine Man, the choppy Message In Blood, the lolloping The Sleep and the bare-knuckle fist-fight of the album’s closer, The Art Of Shredding. Released on 24 July 1990, Cowboys From Hell was an adrenalin shot to the dying heart of a metal scene rapidly losing appeal due to dated clichés and a paucity of ideas, not to mention the more authentic rock scene emerging in Seattle. Even Metallica had adopted a more polished and commercial sound, so from the start Pantera faced an uphill battle.

“I wanted to bring hardcore attitude to heavy metal”

With a reputation that already preceded them, Pantera had to take the album out on the live circuit to crowds who had either never heard of them or, worse, were only familiar with their glam-metal days. The group’s first challenge was a national tour with thrash-funk crossover band Suicidal Tendencies, but they hit the stage hard night after night and had a lethal combination of raw talent, self-assurance and tenacity to win crowds over one fan at a time. Cowboys From Hell was the album that set Pantera on the path to surviving lean times for heavy metal. But they also became the rare metal band who could sell a million albums with ease. Spearheading a new breed of metal, they were now looked to by other groups seeking inspiration

Phil Anselmo, a frontman with the presence of a heavyweight boxer. “By all rights, I was a hard headed young man,” Anselmo later reflected. “I would do things for reaction, and I would do things out of spite… from that proverbial chip [on] the old shoulder.” Here was a young man fed up with the tired old metal stance.

Anselmo further explained, “Even though we were a heavy metal band… you know, I shaved my head on purpose. I was fucking damn dead sick and tired of prototypical long-haired, long-maned lead singer, ‘How’s everybody feeling out there tonight,’ you know? It was fucking boring, man. I wanted to change the pace of that. I wanted to bring hardcore attitude to heavy metal, or thrash or whatever you wanna call it.” It was an attitude that permeated every second of Cowboys From Hell, a record that has outlived its dated production quality and remains every bit as urgent today as it did 30-plus years ago.

“This album opened up a lot of doors,” Rex Brown told Revolver in 2020. “When I look back on it now, it was a really solid stepping stone for what was fixing to come. The camaraderie back in those days, we were all for one. There wasn’t a tighter band on the goddamn planet.” Pantera had, to coin a phrase, reinvented the steel.