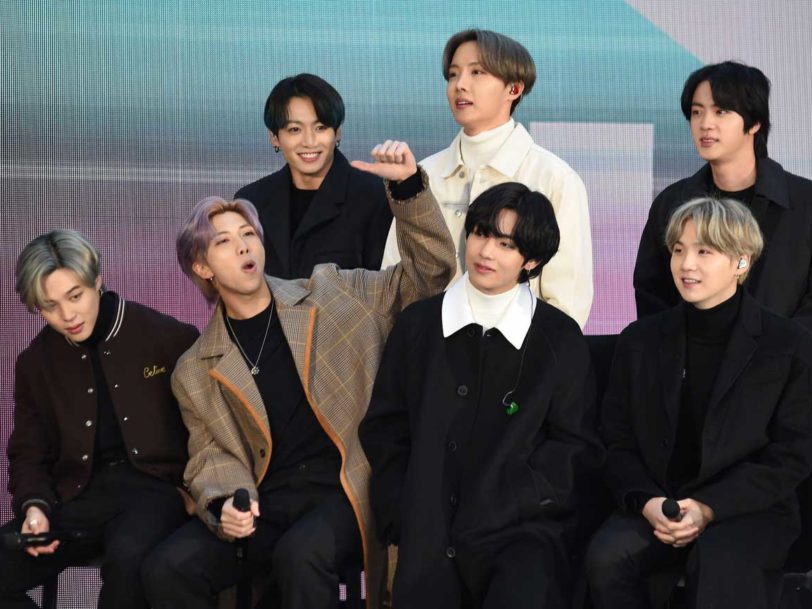 From trademark intense choreography to record-breaking view counts, the best K-pop videos of 2020 have upped the game – again.

K-pop videos are known for their high production values, high-octane dance routines, and dazzling scene settings. With hits from K-pop veterans BTS, to standout cuts from relative newcomers such as Everglow, the best K-pop videos of 2020 have again set the bar for a genre that is constantly smashing records around the globe.

After gaining a lot of attention for their debut single, 2019’s Bon Bon Chocolat, and its follow-up, Adios, rising K-pop girl group Everglow returned with Dun Dun in 2020.

The bass-heavy song is a charismatic takedown of anyone standing in their way, the six members hyping themselves up and herald their impending domination over bold beats and dynamic trap breakdowns. Fittingly, Dun Dun’s dramatic music video features the group backed by a bastion of fashion-forward dancers and flag-bearers.

The eight-member boy band Stray Kids (often referred to as SKZ) formed in 2017, emerging from the JYP Entertainment reality show of the same name. Releasing seven EPs across 2018 and 2019, they finally issued their debut album, Go Live, in June 2020.

The group’s second single, God’s Menu, showcases why each of the boys earned their position in the band. From posing as chefs at a restaurant, to car racers or dancing on a construction site, all eight members look incredibly fierce while singing with choreography so intense you have to double-take to ensure you’re not missing anything.

The world’s biggest girl group are no strangers to epic, big-budget music videos, having twice broken the record for most-viewed music video within the first 24 hours of release. Unsurprisingly, then, their work comfortably earns its place among the best K-pop videos of 2020.

Ice Cream, the second single from their highly anticipated debut album, The Album, features US singer Selena Gomez, and debuted at No.13 on the Billboard Hot 100, becoming the group’s first single to peak inside The top 20. Sung entirely in English, Ice Cream is a cute bubble-gum pop gem with colourful visuals to match. The stripped-back video boasts the hardcore choreography BLACKPINK are known for, letting us see a more playful side of the girls.

This wouldn’t be a K-pop list without Korea’s biggest boy band featuring once or twice. Dynamite is the first fully English-language song by the global juggernauts. An upbeat disco-pop track, it also became their first US chart-topper when it debuted at No.1 on the Billboard Hot 100.

Securing its place among the best K-pop videos of 2020, Dynamite set three new Guinness World Records while racing to 101.1 million views. Within a mere 20 minutes of its release, it had become the fastest YouTube video to reach ten million views, and it broke the BLACKPINK-held records for most-viewed YouTube videos within 24 hours.

The nine-member Twice were the best-selling Korean girl group of 2019, having sold over nine million albums in South Korea and Japan. Debuting in 2014 as former JYP Entertainment trainees and auditionees, the group’s name came from JYP’s founder, JY Park, who said, “The group will touch people’s hearts twice, once through the ears, and once again through the eyes.”

The Garden Of Eden-inspired music video for More & More showcases the group dancing in bright neon foliage, surrounded by butterflies and animals, before being transported to a lake for some killer dance moves.

When it comes to creating an epic girl group, JYP Entertainment know the formula. Wannabe is the lead single from ITZY’s second EP, IT’z ME. Produced and written by Galactika, this fun, energic track blends house and hip-hop with bubble-gum-pop melodies.

ITZY’s performances are characterised by high-energy, synchronised dance moves and edgy outfit changes, and More & More scored over 11 million views within 24 hours of its release. It went on to accumulate 190 million views in August 2020, hitting that target faster than any other JYP Entertainment video.

As the lead single from Agust D’s (aka Suga, from BTS) second solo mixtape, D-2, Daechwita debuted at No.1 on the Billboard Rap Digital Song Sales Chart, simultaneously becoming the highest-charting – and first – song by a Korean artist to do so. (D-2 itself broke further records when it became the highest-ranking album in the US, UK and Australia by a Korean solo artist.)

One of the best K-pop videos of 2020, Daechwita takes inspiration from the 2012 Korean film Masquerade, in which an acrobat acts as the body double for King Gwanghae, eventually taking the throne while the ruler recovers from being poisoned. At the end of the video, the double is meant to be executed, but he instead forms a pact with the executioner, and shoots the king to death.

Showing that BTS’s creativity has no limits, Black Swan received two music videos in 2020. Arguably the most creative of the group’s videos, the YongSeok Choi-directed “art film” version of Black Swan features interpretive dance performance by the Slovenian-based modern dance troupe MN Dance Company, dancing to the orchestral version of the song.

Staged in an abandoned mall, the video sees six dancers dressed in oversized suits enter the frame, followed by one shirtless lead dancer who stands apart from the rest. The symbolic choreography gets more intense and combative as the lead dancer, turning into the “black swan”, tries to escape from the clutches of the others in order to break free from a cage of light.

Dominating our list of the best K-pop videos of 2020, BTS once again released two different videos when it came to On, the second single from their fourth Korean-language album, Map Of The Soul: 7. The first, dubbed Kinetic Manifesto Film: Come Prima, was released on 21 February, in conjunction with the release of the single and album. It shows BTS, World Of Dance season two champions The Lab, and The Blue Devils Drum And Bugle Corps performing near the Sepulveda Dam, unleashing a now legendary dance break. Within 24 hours of its release, it quickly became the seventh most-watched online video.

BLACKPINK have broken countless records, among them topping Billboard’s World Digital Song Sales chart three times, being the Korean act to score the most Top 40 hits in the UK, and the first female Korean act to receive a certification from the Recording Industry Association Of America, thanks to their hit single Ddu-Du Ddu-Du, whose music video is currently the most-viewed video by a Korean group on YouTube, and one of three BLACKPINK music videos that have reached one billion views.

Topping our list of the best K-pop videos of 2020, How You Like That, the first single from The Album, set records for the most-viewed music video within its first 24 hours, simultaneously breaking three Guinness World Records, before being beaten by BTS.

It is not hard to see why. BLACKPINK’s music videos are always high-budget productions, with each girl filmed in an individual setting, to show off her persona.