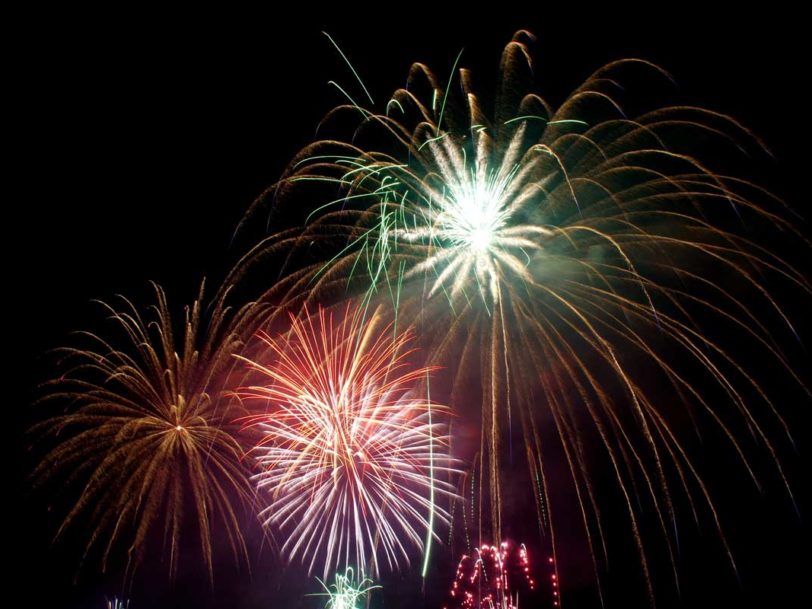 Auld Lang Syne: A History And Notable Versions Of The New Year’s Anthem

Originally written as a poem by Robert Burns, ‘Auld Lang Syne’ rings in every new year, and even gets used at funerals and in Japanese bars.

The time is five to midnight, it’s 31 December. You’re seven years old and you’ve been asleep for hours while the rest of your family are topping up their drinks and waiting for midnight. As you lift yourself out of the corner you’ve been curled up in, you rub your eyes and see the blurry outline of a suited man playing piano on the TV. That man is Jools Holland. The clock strikes midnight, and you watch footage of fireworks launching over Tower Bridge and Edinburgh Castle. You’re handed a saucepan and a wooden spoon and join the back of a conga line that snakes down your street. Then something even more unusual happens – your family and all your neighbours start to chant a song in unison. The lyrics are inaudible, but the song feels familiar, as if you’ve known it your whole life. That song is Auld Lang Syne.

Auld Lang Syne is synonymous not just with all types of endings and new beginnings, nor the passing of one year into the next. It is sung at the end of a cèilidh, after funerals and weddings; and the melody even gets used in Japanese shops and bars to signal closing time.

“Auld lang syne” means “old long since” in today’s English, and the song’s lyrics are associated with reminiscing on days gone by and the years of memories shared with loved ones.

The mighty Scottish poet Robert Burns penned (or quilled) the poem to which the tune is set back in 1788, whereas the melody itself comes from a traditional folk song. The original Scots verse has since been adapted to standard English so it can be drunkenly roared by all.

Despite there being another three choruses in the original poem, the opening verse and the first chorus tend to be the most that we can all stretch to in the early hours of the new year. Even then, it’s an impressive sight when someone actually sings any of the words other than “for auld lang syne”. If you want to play it safe, just hum along until that moment comes.

There aren’t many songs more nostalgic than Auld Lang Syne. It’s been with you all your life and you didn’t even notice it – just like your appendix.

Even though it’s a song associated with the Christmas period, Auld Lang Syne never makes the cut when it comes to Christmas compilation albums. Maybe that’s because there’s no definitive recorded version of the song; it just retains a sense of timelessness and nostalgia. The recordings of Auld Lang Syne are your memories of it, sung by your loved ones – the most important artists of them all.

That’s not to say there haven’t been plenty of notable attempts at performing the song, some of which really aren’t any better than those heard in your local pub in the early hours of the new year. However, there are some absolute gems out there. So, in the style of Jools Holland, the UK’s unofficial New Year ambassador, let’s walk around the studio and introduce each version.

The first time you see Paolo Nutini sing Auld Lang Syne, you’re convinced he’s lip-syncing to the voice of an old crooner. But no, this really is his beautiful gift. He’s Scottish, too, so you know he’s going to belt the song out with the passion it deserves. You also get the added bonus of Nutini explaining what the song means to him and the beauty within the lyrics.

If you kept the cameras rolling for long enough, there’s a good chance you would have caught Prince effortlessly playing one of your favourite melodies mid-show. This short clip absolutely proves the rule, as his royal funkiness decides to tear Auld Lang Syne apart on New Year’s Eve 1987 (the full concert finally saw the light of day on 2020’s Sign O’ The Times: Super Deluxe Edition box set). We don’t get to hear Prince sing his way through the verses, but maybe that’s because he also didn’t know the lyrics past the first chorus.

It’s safe to assume that anyone finding themselves at a Flaming Lips gig on New Year’s Eve would be in no fit state to remember what they performed. Luckily, someone kept their phone steady for long enough to catch Wayne Coyne delivering a surprisingly pared-back rendition of Auld Lang Syne. No reversed audio recordings of Scottish poetry or sitar to be found on this occasion.

While only featuring briefly at the end of The Smiths’ song Asleep, the use of Auld Lang Syne well and truly demonstrates its power to trigger sorrow as well as joy. Asleep may be the saddest Smiths song of them all – which is a feat in itself, considering they have songs titled Last Night I Dreamt That Somebody Loved Me and Never Had No One Ever. This will be the version of Auld Lang Syne you were most familiar with when you were a teenager and didn’t want to speak to anyone on New Year’s Eve.

The champion of selecting the Scottish Cup fifth-round draw, and for having the strongest hair in the business, Rod Stewart has laid down several impressive versions of Auld Lang Syne in his time. This beauty is from the Festival of Remembrance back in 2012, and it includes a bonus introduction from the mighty Huw Edwards.

This version from The Boss is an impressively cut-together fan video. It’s a bit like home-video footage of your family’s old New Year’s Eve parties, except there are thousands of people there and Bruce Springsteen is spinning round in circles and thrusting his guitar at you.

For more seasonal classics, check out our 20 best Christmas songs