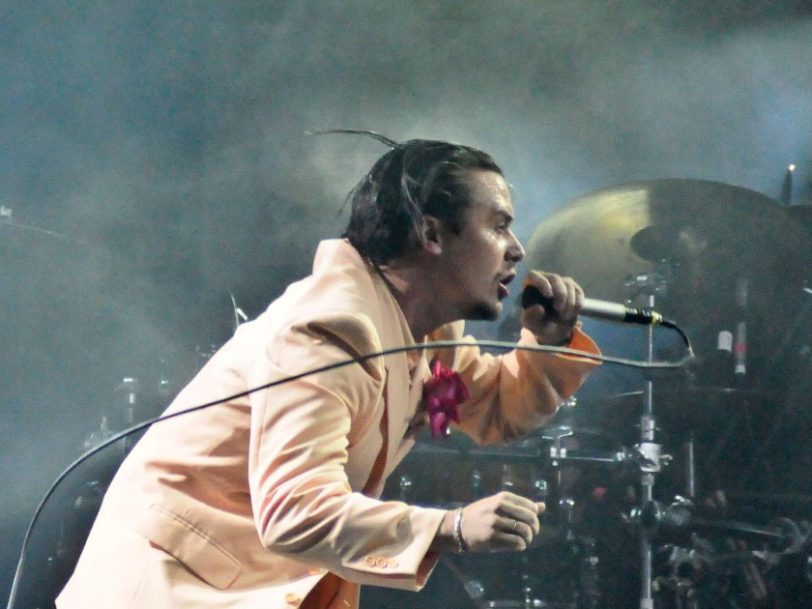 Shaped by a rising Mike Patton, Faith No More’s ‘Angel Dust’ album was an ambitious change in direction from a radically contemporary group.

Released in the summer of 1992, Angel Dust was the fourth album by Californian alt-rock band Faith No More. The group’s roots stretched back to the post-punk days of 1979, when several members traded as Sharp Young Men before settling on their final moniker in 1983. As Faith No More they went through numerous line-up changes (briefly featuring the singers Courtney Love, later of Hole, as well as Paula Frazer, later of Tarnation), and had cult success with their second collection, 1987’s Introduce Yourself. Two years later, the funk-metal classic The Real Thing provided the band with their real breakthrough, boosted by the presence of a young Mike Patton on vocals. Patton was a precocious talent, who’d already been working with the curious Mr Bungle, and he helped propel Faith No More to platinum status with the lithe From Out Of Nowhere and the lively, semi-rapped Epic, the band seeming radically contemporary compared to the stodgy hair metal filling the airwaves at the time.

While only the lyrics for The Real Thing were provided by Patton, he had a more overriding influence on its operatic, multimillion-selling alternative-metal follow-up, Angel Dust. Despite sticking to compact track lengths, the album took Faith No More on an ambitious change in direction, as reflected in an array of sample sources that included 60s folk-rock rockers Simon And Garfunkel, The Wizard Of Oz and, reputedly, industrial legend Z’EV. This stylistic shift would lead to band mainstay Jim Martin leaving the group, but it would also prefigure Patton’s helming of the esoteric and varied Ipecac label (whose artists included the grunge mavericks Melvins). The other players on the record were early joiner Roddy Bottum on keyboards, and original members Mike Bordin on drums and Billy Gould on bass; producer Matt Wallace returned, now aiming for a weightier bass tone than the one he’d captured on The Real Thing.

The connection between Angel Dust’s title and slang for the risky drug PCP summed up the often downbeat record’s attempt to find beauty in horror – something underlined by the angelic pose of a heron on the front of the sleeve, contrasted with an image of an abattoir on the back.

Angel Dust begins with the funky but progressive and grandiose Land Of Sunshine, whose soaring vocals reveal an unholy mash-up of fortune-cookie aphorisms and lines from Scientology tests. The first of Patton’s experiments with writing while deprived of sleep, the song offers immediate evidence of the album’s individualistic lyrical concerns. Caffeine, the questing, episodic second part of that diptych, follows close on its heels.

The first single from the album was the catchy Midlife Crisis, which featured a natty scratching sample from Beastie Boys on the bridge. The evocative country waltz of RV then lurches around before launching into bursts of trailer-trash outrage and moving on towards the depressive situations of the adventurous Smaller And Smaller.

The headbanging funk-metal single Everything’s Ruined was consistently compared to easy-listening doyens Carpenters by Faith No More themselves, though the song’s lyrics are hardly reminiscent of those of that famous sibling band. Instead, they intriguingly and cryptically seem to compare a couple having a baby with the corrosive effect of the monetary system. Given a goofy video clip (the band ran out of budget), Everything’s Ruined has since been covered and used in video-game soundtracks multiple times.

A stark statement of intent

Angel Dust’s centrepiece is Malpractice. Alone on writing credits, Patton recontextualises Shostakovich alongside a lift from the extreme vocals of Diamanda Galás, which, in a stark statement of intent, seem to chime with Norwegian black metal of the time. In contrast, Patton returned to rapping for Kindergarten, with its more classical metal motifs. A rush of relatable but not necessarily pleasant childhood memories, the song depicted a fear of adulthood.

Beginning with an almost Phantom Of The Opera-style flourish, Be Aggressive is a Roddy Bottum composition; it was known as “I Swallow” by the band, on account of one of its two saucy hook lines (the other being cheekily delivered by cheerleaders). It’s followed on the album by the relationship difficulties of the funky, accessible single A Small Victory, which is, in part, oddly tonally reminiscent of some of Brian Eno’s 70s work.

Chicken-scratch Blaxploitation guitar, political-rally sound effects and the tale of a crazed drug kingpin make up Crack Hitler, which also became a Midlife Crisis B-side. Jizzlobber is a sludgy, heavy-riffing, Jim Martin-dominated composition; featuring Patton-penned lyrics about prison and abuse, the song eventually climbs into dizzying church organ and choir. Finally, an only slightly rocked-up (but heavy in the low end) version of John Barry’s much-loved theme for the 1969 film Midnight Cowboy serves as the release of tension which closes the set.

The fans’ and critics’ choice

Extras on some editions of Angel Dust included a new version of an earlier composition, As The Worm Turns, doubtless the sort of material which would have served as an influence on Cradle Of Filth’s symphonic metal. There were also live discs and a promo-only interview disc issued to accompany the record’s release, on 8 June 1992. The original truncated vinyl edition was later amended, with a 2008 remastered double-disc set restoring the full tracklist to wax. Later still, a 2015 deluxe 2CD reissue finally pulled together most of the tracks associated with the album, including the loose B-side cover of Dead Kennedys’ punk classic Let’s Lynch The Landlord, and one of Youth’s rippling, trance remixes of A Small Victory, reminiscent as it was of electronic body music. Most notable of all the additions was a companion piece to Midnight Cowboy: an accomplished, melancholic version of Commodores’ Lionel Richie-penned soul classic Easy, which became a massive (if uncharacteristic) nostalgic hit for Faith No More over Christmas 1992.

Despite all the end-of-year praise, and a growing reputation as the years went on, it took the band until 1995 to come back with their next album, the diverse King For A Day… Fool For A Lifetime. Though the general public most associate Faith No More with The Real Thing and Easy, Angel Dust was the fans’ and critics’ choice. There’s still time to discover its depths.

Looking for more? Check out our list of the best 90s albums.